The cowboy myth has meshed marvelously well with gaming. This is because the Western genre is fueled by violence and action, as well as terse characters and stunning scenery. Desperados III encapsulates this American Frontier-set spirit and then some. Incorporating a captivating revenge story and satisfying stealth combat made me feel like a prospector finding fortune in an unlikely deposit. Even as someone typically deferred by tactical games, it blew my expectations.

If you have never played a Desperados game (me neither,) do not worry. This third entry is an origin story, set in the 1870s. John Cooper is the protagonist, a gunslinger on a quest to right wrongs and settle a score (sound familiar?) Along the way, he meets strangers that soon bond with him, and an unlikely team of miscreants forms to achieve a common goal. Even if it does not reinvent the wagon wheel, the plot is a classically told epic of revenge. It is inspired heavily by the greatest Western movie, Once Upon a Time in the West, as evidenced by the mercenary-employing Devitt railroad company playing a crucial part in the narrative, as well as "Frank," the villain. 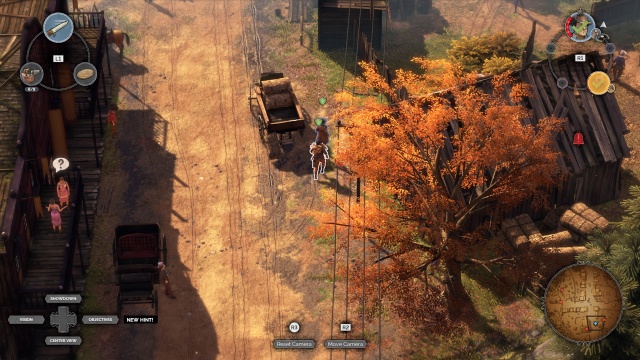 Welcome to the Old West

The music also embodies its influences and the Western spirit. Since this was released post-Red Dead Redemption, you can tell the score was inspired by Bill Elm and Woody Jackson, and it turns out all the better for it. The fuzzy guitars, harmonicas, and synthesizers all sound like they could be heard in Rockstar's series, and the tracks evolve as you progress through levels. All-in-all, Filippo Beck Peccoz composed a score that is atmospheric and enjoyable to listen to.

Aesthetically, the game is stupendous. The art style is simply a joy to look at. No matter if you zoom in close or far away, both locations and characters are fantastically designed. These two elements come together terrifically when a level begins and ends. There are one-take cutscenes that really hit the spot when it comes to motion capture, scene execution, and impeccable framing that borders on fulfilling mise-en-scene. Like the cutscenes, the game sports stylized aesthetics similar to developer Mimimi's previous acclaimed game, Shadow Tactics: Blades of the Shogun.

Mechanics and presentation are also strongly similar to Shadow Tactics. Desperados III is an isometric, tactical game with a hardcore stealth system. You control one of up to five characters, or all of them concurrently. With someone selected, you have to progress through a typically expansive area full of enemies. Baddies will have their own scheduled routines - these include guard duty walks, work duties, and other such activities. You will have to decide the best possible plan to tackle any given group. The player choice here is exemplary - allowing lethal/non-lethal takedowns as well as the possibility of slipping past groups entirely (if you are good enough). 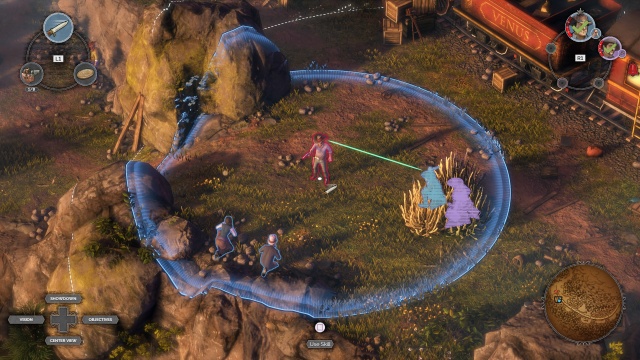 What are you going to do?

I love this because failure does not seem like a chore, but an invaluable lesson. Desperados III is designed around quick-saving and loading up again - it will be one of your most frequent actions. If the game were a cakewalk, it would not be anywhere near as satisfying, and it is genuinely deserving of the genre title of 'hardcore.' If you are playing on harder difficulties, you will want to use 'Showdown,' which pauses everything and lets you plan out your actions in whichever way desired. This can result in incredible moments where you execute your plan, for instance, and then all of your team takes out bandits in a stylish tandem. I also adore that Showdown is optional and that the game rewards you for spontaneity and initiative.

There are five playable heroes, each with their own abilities and different ways of carrying out actions. Protagonist Cooper is quick and agile, and his repertoire includes a six-shooter, throwing-knife, and coins for distraction. When he carries the knocked out or dead (you can put them in barns, toilets, wardrobes, etc.), Cooper puts the body over his shoulder. Conversely, Arthur McCoy is a mysterious self-proclaimed "doctor" who favors a more covert approach, keeping to the ground and dragging enemies Hitman-style. He also has equipment such as a 'Buntline' (pistol sniper) bandages for healing, swamp gas vials, and a doctor's bag for traps. Overall, each of the five playable specialists feel utterly unique - they all have their own animations for everything, and each individual has their own distinctive, well-written personality. 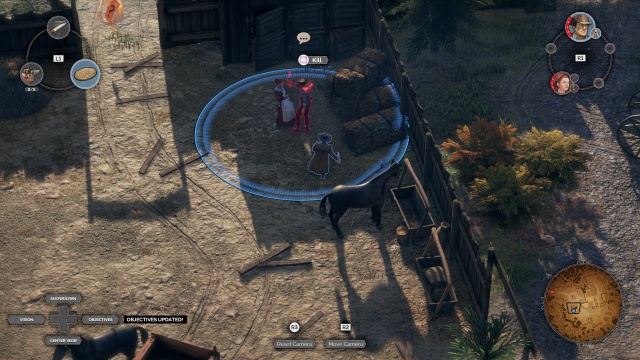 There are many different types of evil cowpokes for you to poke a knife through (although, there are some you cannot.) 'Gunmen' and 'Thugs' are your typical underlings. On the other hand, 'Ponchos' do not leave their dormant posts, and will be distracted in shorter durations. The 'Long Coats' are the most fearsome, having three points of health as opposed to just one. To defeat them via takedown, you have to play as 'Hector,' the brute trapper. Otherwise, the only way for them to be bested is to pump them with a lot of bullets.

Eventually, you may run out of bullets for guns (you can refill them with rare ammo crates,) but it is not worth going full Man-With-No-Name to solve your problems. Because most firearms are loud, they will alert others, and even cause extra reinforcement patrols to be deployed in 'Alarm Zones.' Instead, you should stick with melee, and take advantage of the environment. You could push a hanging boulder off a cliff to crush a few bandits or startle an animal to buck an unsuspecting cattle rustler. Or, perhaps, you want to poison drinks or tamper with machines when taking out indoor targets. There is a myriad of inventive ways to play your way - with plenty of hints thrown in to guide you in case these methods are not apparent. This makes for objectives that are always clear and challenging.

You can access the 'Vision' section of the D-pad, which highlights the nearest enemies to you and their 'Viewcone,' the detection radius of all enemies. The color green indicates unawareness while being in the cone slowly changes the color to yellow and then red to serve as danger levels. You can also place a viewcone marker, which shows whether a spot or person is being watched by guards. And, finally, you can speed up time at a standstill. Coupled with the intuitive navigation and camera controls, you can tell that this was a game designed for both PC and consoles in mind.

Once a level is completed, you will see a rundown replay of all your actions and quicksaves, which is hilarious and delightful to watch if you spent hours on a single level running around in circles. You can also replay missions for 'Badges,' which are special tasks such as 'Don't touch any bushes or haystacks." I was personally disappointed by the lack of RPG-like progression, so at least this fills the void by adding replayability. 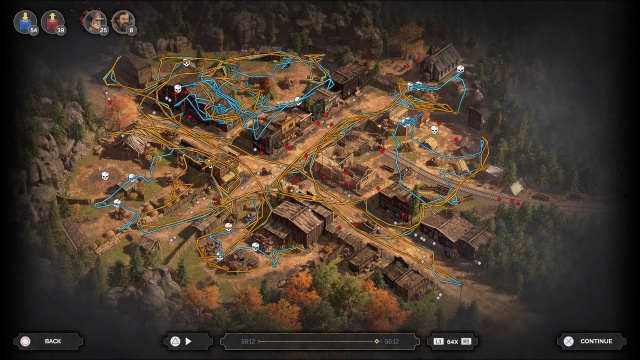 Desperados III is a defining game both for the tactical and Western genres. It presents a bucketload of possibilities for you to become a Sergio Leone legend, and it completely understands the mysticality of the American Frontier-set fiction that inspired it. Whether you are new to hardcore stealth games or not, this is a rootin' tootin' good time.

Final Rating: 87% - What in tarnation? Is this the best non-Red Dead Redemption Western game? Maybe so, partner - pony up and play this 30-hour epic!