From the moment you begin playing Sekiro: Shadows Die Twice it will let you know that it has no intention of taking it easy on you. The game's timing-based swordplay of strikes, counterstrikes, blocks, and dodges demands tight timing and quick thinking. Choose the wrong response to any enemy attack, or choose the right one too slowly, and the game will make you pay dearly for your mistake. None of this will ever feel cheap or unfair - your mistakes will always be yours to own. Every failure will serve as a lesson, and provide you with motivation to try harder and do better. Conversely, every victory will feel hard-fought and well-earned.

In Sekiro: Shadows Die Twice, you take on the role of a shinobi known as Wolf. The child prince that you are sworn to defend is kidnapped after you fail to protect him in a duel that leaves you maimed and nearly dead. You're rescued by a mysterious sculptor who replaces your missing hand with a mechanical prosthetic that can be fitted with different attachments. Its basic function is to act as a grappling hook which allows you to cross gaps and reach high places, making it possible to cross chasms, reach the heights of treetops, or move across the rooftops of a temple complex. You'll discover new tools as you make your way through the game, and when you do you can return to the Sculptor to have them attached to your arm. These attachments often give you more options in battle, for example allowing you to fling throwing stars at your foes from afar or to break shields. While the grappling hook grants unlimited use, other tools require resources to use and so you'll need to be strategic as to when to use them.

The grappling hook's aid to your mobility makes it an indispensable tool for survival. Battles against single foes are challenging in the game, against more than one foe at once are even more deadly. You'll need to work to turn the odds to your favor and one of the best ways to do this is to isolate and eliminate your enemies before they become aware of you and attack you in numbers. The grappling hook will allow you to move into an advantageous position unseen so that you can drop down on an enemy and deliver a fatal blow before he is even aware that you are there. The locations in Sekiro are often relatively open, giving you plenty of options on how you want to approach and attack each enemy position. For those of you who prefer the tension of making your way through tight interior spaces and corridors, don't worry, the game will give you plenty of chances to do that as well. 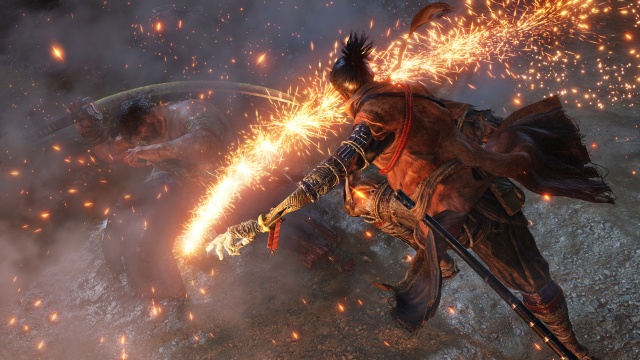 Combat requires locking on to a target and then carefully timing strikes, parries, and dodges based on your opponent's actions. Your enemies will very briefly telegraph their moves, giving you a split-second to prepare to use the right counter when they make that move. You must also carefully watch for the moments when you have the opportunity to land a blow on your opponent. Each type of enemy has their own style and types of attacks and the timing for reacting to each varies, which makes the game both a constant learning experience and a challenge - you won't be able to rely purely on reactions honed in the opening levels. You also won't be able to rely on picking up or grinding for one better weapon or piece of armor after another, new loot won't give you an edge against an enemy you're having trouble with. The game eschews the traditional loot system to put the focus on honing your skills over obtaining better gear. There is a skill tree system, though, so you will be able to increase your innate skills and attack repertoire, and shape them to fit your style.

Battles in the game rely on the concept of posture, which is essentially an enemy's ability to continue the fight. Successful hits, blocks, and other moves will chip away at an enemy's posture, which can be regained if you fail to counter an enemy move. You can damage some enemies without reducing their posture to zero, but once an enemy's posture has been reduced to zero you can land truly damaging blows. With lesser enemies this can take the form of a single, lethal blow, but with tougher enemies and bosses it exposes their health bar to damage. This latter case can lead to some protracted boss battles, making them even more challenging than they would have been without the posture system. If you're frustrated by prolonged boss fights that will lead to many failed battles, then this game is probably not for you. Conversely, if you don't shy away from a challenge you will feel that you truly earned each hard-fought victory.

Should you fall in battle, you can resurrect at one of the Sculptor's idols that you've discovered during you travels. If you played the Dark Souls games, these idols are similar to the bonfires in that game, serving as save points and fast-travel locations. You'll regain your life and health, but you'll find that the enemies that you defeated on your way to your last battle have been restored, and you'll be penalized by losing half of the experience and currency that you gained since you last visited an idol. You can avoid this penalty if you have and use a resurrection token, but doing so has consequences.

The "Shadows Die Twice" in the game's title is a reference to Wolf himself. He is the "Shadow", a stealthy and deadly assassin that can strike from and disappear into the shadows before anyone knows he's there. The "Die Twice" refers to the resurrection system. Wolf may have the ability to resurrect and continue the battle when killed, but dying twice comes with consequences. The world in Sekiro is suffering from a supernatural corruption that affects both the land and the people there. If you die in the same battle a second time, your failure will help feed and empower the corruption. The NPCs you interact with in the game will become progressively sicker, but there is also an impact on gameplay in that the aid that they can give you becomes less effective. Choosing to resurrect is not simply a quick and thoughtless press of a button - you need to weigh your chances of completing the fight against the consequences that will occur should you fail.

The game is set in pre-Edo Japan, but this is the Japan of myth rather than history. You'll encounter mythical beasts and spirits, and visit mystical locations that could only exist in legends. The familiar yet otherworldly land in which the game takes place is mesmerizing and infuses the game with a unique and compelling atmosphere.

Sekiro: Shadows Die Twice is an enjoyable, yet deeply challenging game. It's not really a Dark Souls with samurais game, but whether or not you enjoyed the difficulty level of the battles in Dark Souls will be a good benchmark in gauging how much you'll like Sekiro. If you're persistent, up for a challenge, and don't become frustrated easily, then Sekiro: Shadows Die Twice is an easy game to recommend.

Final Rating: 90% - Shadows may only die twice, but you will die a thousand deaths.