Dark Devotion is a dark and dreary action rpg that plays much like a 2D Dark Souls. You take on the role of a female templar that forsakes her companions to take on a mysterious temple in order to prove the strength of her faith. This game is incredibly dark when it comes to the overall mood of the game. The game is literally oozing with atmosphere throughout its dark corridors littered with enemies and traps. The game has some great sound and you truly feel alone while on your journey.

Dark Devotion is hard and very unforgiving. You have two dodge buttons (forward and backward) and can arm a main weapon and a subweapon. The subweapon can either be a bow or a shield. Your character starts with a certain amount of faith and gains faith through defeating enemies. You must use your faith at prayer alters in order to unlock temporary blessings, new items and new paths. 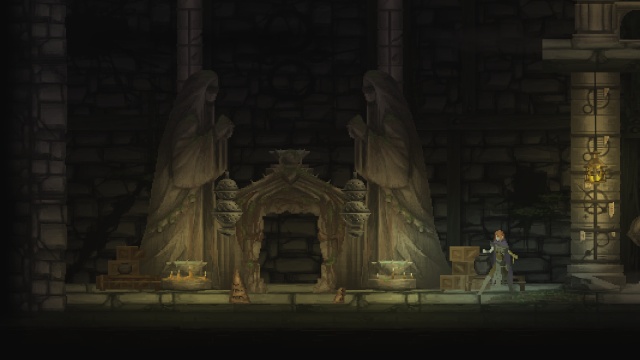 The game is hard and very unforgiving at times. Whenever you die, you lose all your faith and any consumables and weapons that you had on you. You are sent back to a sanctuary (starting point) where you must basically start all the way over. The game does provide fast travel paths that you can unlock while exploring however - once you're back at the sanctuary, you can find the fast travel back to warp closer to where you were. While at the sanctuary, you can use your experience points to purchase upgrades. Upgrades become available to buy as you journey further into the temple - you'll have to beat certain bosses in order to unlock higher tiers of upgrades.

Combat is very slow and takes patience. You can't simply run up to an enemy and hit the enemy without the fear of it attacking you. Enemies most often have a type of super armor that will keep them from getting stunned during your attacks. Attacks can be blocked with a shield and some attacks must be dodged with either the forward or backward dodge buttons. Boss battles really shine in Dark Devotion with this setup, but normal enemy battles can get frustrating when you have more than one enemy. Normal enemies can rush you and pin you against a corner easily when they team up in areas. It's hard to avoid enemies, so once you die, you'll have to face all the enemies that respawn once again.

You can equip a good variety of weapons, such as swords, greatswords, small sickles, scythes and all of these add some good variety to combat. Just like a Dark Souls, every enemy has their own unique attack patterns that you'll have to learn. Some attacks can be guarded and some must be dodged. Some attacks set you up for a slight stun when guarded. You'll have to learn each enemy and boss and how to best them. The bosses have at least two phases to prepare for when fighting them. For instance one boss starts out chained to a wall and this limits his attacks greatly - you have to get close to him in order to hit him and then avoid his retaliation attacks. Halfway through the battle, the boss becomes unchained and can move toward you while he attacks. 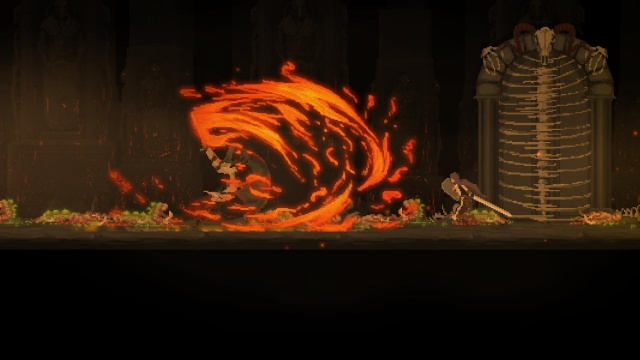 The game allows you to interact with many NPCs to engage in text dialogue. Sometimes the game is not clear in what you are actually doing or where you are going. For instance, the game never does truly explain what praying at alters really does. Quests that you get from NPCs are often vague as well. The opening cutscenes sets the game up for a promising story, but the in-game text isn't all that interesting. I really feel that voice acting would have helped out the story to this game a lot. Dark Devotion is good, but its just not as exciting as other games like Dead Cells and Dark Souls. The game has many little flaws that add up to ruin the overall experience. Die hard fans of rouge-like element games might enjoy Dark Devotion for its difficulty and overall atmosphere, but I think many players will find their time better spent with other rouge-like games.

The Bad:
- Lack of knowing what to do and explanations for some gameplay elements
- The overall game is not all that exciting

Final Rating: 65% - While it has a great atmosphere to match its title, Dark Devotion is brought down too much by its flaws.