Runbow is a peculiar mix of platforming, racing, and brawling. In the main mode, 'Run,' you have to race to the end of a level while overcoming various obstacles, as well as fending off up to eight rival players. This is a summary of the game's greatest strength - multiplayer. Alas, it seems like finding servers nowadays is equivalent to chasing rainbows, since this is yet another title that has inherited the dreaded indie curse - a desolate player base. However, if you have a lot of gamers in your household and some spare controllers, this is a powerhouse party game worth the couch competition. 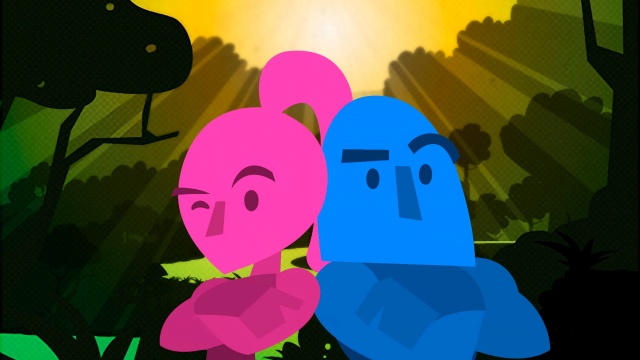 The story department is pretty much nonexistent, but I will try to explain what is going on in the 'Adventure.' A film crew is just going about their business until an evil woman named Satura, out of jealousy, pulls them into a portal of sorts. You will then have to navigate a tiled map consisting of levels set in forests, tropics, and spooky manors. A real plot would have made for some great motivation to trudge through the frustrating and dull levels. The difficulty spikes are too standoffish, and the hostile 'Blots' are some of the plainest baddies you could ever face, besides some decent boss battles. While there is an effort to vary the tasks and give you the choice of level, this whole mode is way too repetitive. Unless you are a hardcore platformer, you will get both bored and lonesome quickly. If there is no one to play this locally with, you should stop reading this review, as I really would not recommend the game based on this single-player component. These thoughts similarly apply to the 'Bowhemoth' challenge, which is basically the 'Adventure,' but instead, one dragged out level for speedrunning.

Runbow boasts an eye-catching gameplay mechanic. In each level, the background shifts through a color palette. As a new color fills the screen, certain obstacles/platforms will appear or disappear depending on their respective corresponding colors. Consequently, it is pivotal to watch the cycle in which the colors appear. The Guacamelee! series took a very similar approach - but this is still a wise implementation. And anyway, 13AM Games repaid this inspiration by including the protagonist from that Metroidvania franchise as a playable character. 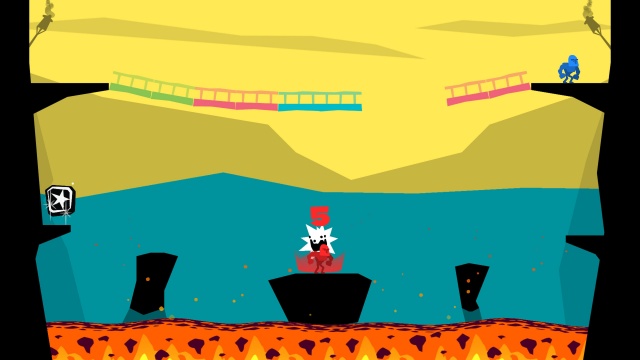 The roster on show here is a force to be reckoned with. Some of the most iconic protagonists from indie titles are unlockable and playable. There are guys like Shovel Knight, the Drifter from Hyper Light Drifter, Rusty from SteamWorld Dig, and my personal favorite - the half-genie heroine Shantae from the Shantae series. They may all pretty much play the same, but to see these underground mascots duke it out is something to behold.

Now we get to the most significant parts of Runbow - the three competitive modes. As mentioned earlier, 'Run' is a race to the trophy at the end of a track, complete with two kinds of spikes - literal spikes and spikes given by other players (punching.) Fisticuffs play an even more prominent part in the latter two modes. 'King of the Hill' is a traditional take on the titular match type with fantastic results. It is intense to try and stay in the hill spot without perishing in rising lava or getting barged off by another player. And finally, 'Arena' is like a miniature Super Smash Bros. Whoever falls to their doom or dies by environmental hazard loses a point. Whatever you play, rounds can be set to a custom number in fives, with each stage being unique and randomized. Similarly, mutual throughout the suite is an assortment of whacky power-ups that can swap player positions, slow down time, or grant 'super punches' that send opponents flying. This all amounts to a stupendous playground for matchmaking- but the online park (server activity) is unfortunately now empty. 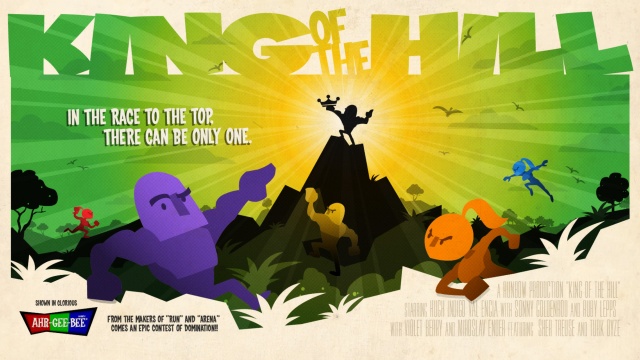 Despite some weak single-player filler, Runbow's player base deserves a new lease of life. With its delightfully flamboyant art style and randomized maps, the game can provide a firm package with its local multiplayer mayhem. Picking your favorite indie hero and fighting for victory in 4-player local tournaments is a genuinely good time. Overall, Runbow is a quirky amalgamation of brawling, platforming, and racing that should aid your search for quality couch competition.

Final Rating: 74% - At the end of the rainbow is an online session you can join in Runbow, a solid but flawed synthesis of brawling, racing, and platforming.