SoulCalibur VI is the sixth installment (not counting Soul Blade) in the long standing 3D weapon-based fighting game series developed and published by Bandai Namco. Unlike the other parts of the series, SC6 is actually a reboot and retells the story of the first SC. Alongside the original story, the game adds in many extra story elements and introduces some new characters and new side stories that were unexplored in the original game. SC6 feels more like a return to form for SC with a much greater emphasis on single player and bringing back much of the original cast from the first SC.

SC6 gives us a 21 character roster with many returning characters from the usual main cast along with three new characters. The full roster is Astaroth, Azwel, Cervantes, Geralt, Groh, Inferno, Ivy, Kilik, Maxi, Mitsurugi, Nightmare, Raphael, Seong Mi-na, Siegfried, Sophitia, Taki, Talim, Voldo, Xianghua, Yoshimitsu and Zasalamel. Thankfully, this list has no substitute characters in place of the original and all of the characters that were once similar are drastically different now. For instance, Seong Mi-na and Kilik now only share their series of forward pokes. Strangely, the game has no mimic characters. Groh and Azwel are two original new characters that fit very nicely into the story. Groh fights with two swords that he can combine into a double-bladed spear and Azwel fights with gloves that he can use to summon weapons with the use of the fragments of Soul Calibur and Soul Edge that are fused to his gloves. Inferno is no longer a mimic - he plays similar to Nightmare, but has enough of his own moves to make him unique. Geralt from The Witcher series joins the cast of SC6 as the usual guest character. Geralt is armed with a short sword and has some magic attacks. 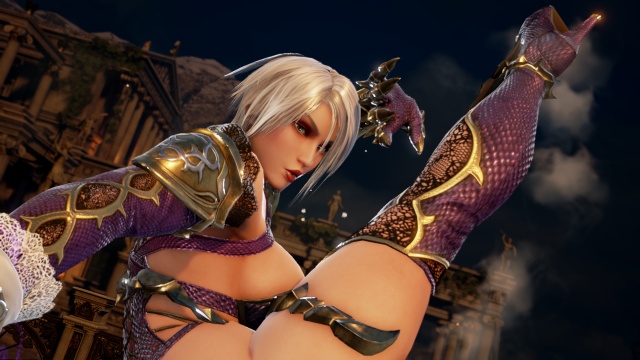 The overall fighting in the game hasn't changed all that much from the previous game. The game still has the same button setup with guard, vertical attack, horizontal attack, and kick. Just like previous game, SC is easy to pick up and play, but it takes commitment to get truly good with a character making it a fantastic game for both casual and hardcore fighting game fans. Ring outs are still a factor during matches and they are still just as easy to pull off when your opponent is near an edge. All fighters have the ability to deflect attacks and they all still have their own unique critical edges (much like a super attacks). Throws are now all mapped to the A + G buttons and allow players to switch up the throw by holding a direction during the grab animation. B + G now does a new Reversal Edge move.

The Reversal Edge starts out as a glowing guard stance and will absorb all attacks that are delivered to the stance as long the player holds down the two buttons. When the buttons are released, the player performs a slash that will send both players into a clash. Both players must press one of any of the buttons during the clash (or perform a type of retreat or sidestep) to attempt to attack, counter, clash or avoid the other player. It's similar to an Injustice clash except the Reversal Edge can be done over and over. Some attacks counter others, some attacks take off more damage depending on the characters used and some attacks will yield different results (such as a stun that can lead into a combo) depending on the character. The Reversal Edge brings the potential for some great mind games. Similar to the wager during clashes in Injustice, you never truly know what button or movement the other player will input - will they attempt to guard the attack, will they go for a low damage kick attack, will they go for the most damaging attack for that character or will they try to avoid the attack?

SC6 dramatically increases the single player value of the game when compared to its predecessor. The main story mode is called Soul Chronicle. Soul Chronicle has a path that follows the main story of the game where we get to play as Kilik, Xiangua, and Maxi. Every character (including the three from the main story) also has their own storyline involving only the chosen character. You'll fight through several opponents on your way through the various story modes. Much of the story is presented with character portraits and text along with voice acting and there are a few cutscenes in the main story. The overall story to the game is WAY more fleshed out than SC1's story and adds much more depth and new plotlines to what is already known - it adds a good amount of depth to all characters no matter what character you choose to play as. This is really the type of story mode that SC5 should have had. If you watch all the interactions along with playing through the battles this mode will last for many hours. 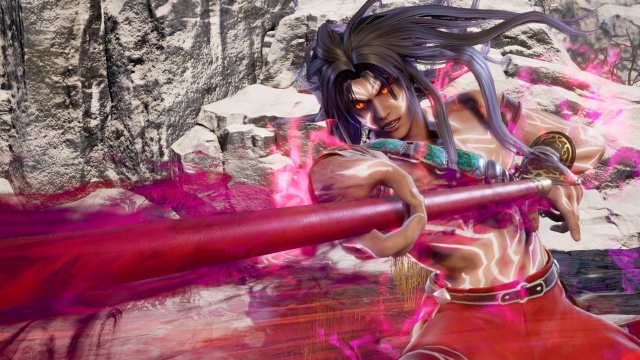 The other story mode is called Libra of Souls. In this mode players get to create their own character and go through a side story. The main story and Libra of Souls intersect at some points. Libra of Souls isn't all that exciting from a story point of view from the beginning, but after giving it a few hours, the plot gets much better. Libra of Souls plays out much like an rpg with battles taking the form of SC matches with varying objectives depending on the mission. You get to choose a main cast fighter that your created character will mimic the style of and get to choose from different levels of weapons with different attributes. You'll gain levels through XP and gold to buy new weapons and items for completing battles. Items can be equipped to characters before matches for attribute enhancements.

There is MUCH exploring to do in Libra of Souls. You can choose to follow the main story, or go off and do side missions. Libra of Souls has tons of side missions that constantly pop up as other missions are completed. Side missions can become very addicting. I would often spend hours doing surrounding side missions before going to the next story missions. Side missions require you to spend gold to travel to the location of the side mission from whatever area you are currently stationed at on the map. While traveling to areas, you can get halted by a random encounter which will result in an extra battle. All missions have a level displayed by them that represents the level of the opponents you will face. The story to Libra of Souls is told through non-voiced text dialogue between characters. There are some points where a voice is used to tell the story, but they are rare. It's understandable that much of the dialogue is unvoiced with the sheer amount of text that you'll go through however. Libra of Souls has light and dark side choices at certain points during its story so it does have a reason to replay it once finished. There are several character save slots, so you can have multiple games going at one time if you want.

For those wondering, the game still has your standard Arcade and Training mode. Arcade is more like a time attack mode where you play for the best time and get graded after beating all 8 opponents - you can wait on Ranked matches as you play Arcade mode and while playing Training mode. The network mode has casual and ranked matches. Casual matches can only be played in lobbies of up to 8 players. Ranked matches are non-lobby matches. Created characters can be used in all online modes. It seems strange to allow created characters into ranked matches since they can change up the overall hit boxes of a character weapon style - such as fighting a very small Astaroth character or a very big Talim character. 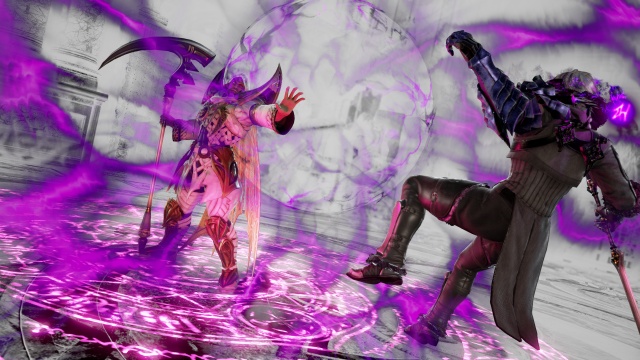 SoulCalibur always impresses when it comes to high quality content and SC6 is no exception. The fighters look great and the game runs at a silky smooth 60fps at all times. Weapon clashes lead to sparks flying and critical edges lead to some explosive and ridiculous actions when they connect. The arenas look beautiful, especially the backgrounds! Sound has always been a strong point in SC and SC6 still carries that torch as well. The voice acting is noticeably high quality for each character. Soul Chronicle mode is really brought to life with the impressive voice acting between characters.

My only real complaint with SC6 is the smaller roster compared to the game's predecessor. SC has such a large cast of characters and I would have liked to have seen at least four more characters make the cut to even out the starting roster before DLC characters. Just about every weapon style is represented but some of the weapon styles and style variations from previous games are nowhere to be found at the moment. Tira's circular blade style will be brought back in the form of a DLC character (Tira) and I'm assuming many of the other styles will be brought back as DLC characters as well.

If you're an SC fan, you will most likely enjoy SoulCalibur VI even if SC5 left a bad taste in your mouth. A series reboot is probably the safest way to keep the storyline fresh in the series while giving us new plotlines to enjoy in the existing story. SC6's single player portion has been improved greatly from its predecessor, so that alone is a major plus. The single player content will last you tons of hours since playing Libra of Souls is much like playing an rpg. SC6 is definitely a great fighter to pick up for both hardcore and casual fighting game fans - it's easily got both groups covered extremely well!

The Good:
+ Really good single player content in Libra of Souls
+ Usual SoulCalibur positives (graphics, gameplay, sound are all fantastic)
+ Still so easy to pick up and play but still takes much commitment to master

The Bad:
- Starting roster could have included a few more characters
- Created characters in ranked matches...? This doesn't good...