At only 13 episodes, Season 2 of Attack of Titan was only half the length of the first season but it was quite sweet. I was curious how the next game would fill in the void for such a short anime - would it only go with the anime story or would it actually venture off into the manga? Well, it stuck exclusively with the anime and Attack on Titan 2 retreads through the first season of the anime before we get to experience the second season content. Thankfully, the gameplay has improved greatly since the first game so there is still much to enjoy in the game. Just like the first game, Attack on Titan 2 is developed by Omega Force and publish by Tecmo Koei.

In story mode, players will get to create a custom (male or female) character and basically start from the beginning of the story that was explored in the first game. Some of the stages and cutscenes from the first game are the exact same, which is disappointing, but the game does include many new cutscenes and once you pass the first chapter of the game, you get new season 1 gameplay stages. It's quite nice how the developers work the created character into the story. You'll get cutscenes that are in a first-person view where your character is joined with the other Attack on Titan characters during the action. Your character's name (whatever you name the character) is included in dialogue during conversations and you have your own story as well.

As the game progresses into the second chapter, you'll start to run across new gameplay elements such as the ability to capture titans. Players can immediately capture small titans or wound then capture bigger titans in order to take them back to your camp to gain extra experience and other rewards for being able to research on them. Capturing adds a nice alternative to constantly killing the titans. You can also stun a titan by calling on other hunters to fly around the titan to distract it and there are also cocktails that can be tossed at titans to damage them as well. 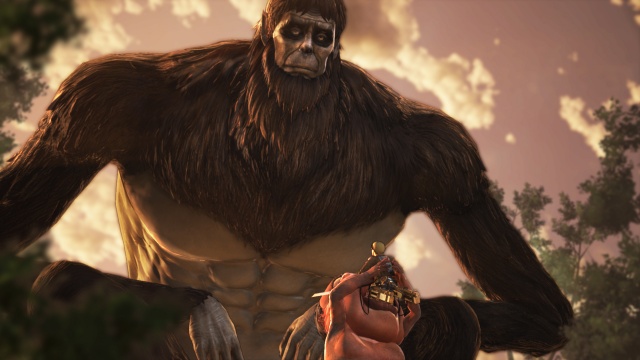 Besides the gameplay being noticeably more fluid, you now have the ability to perform stealth kills on titans. Players must spot a titan from a distance with binoculars and allow a meter to build up then initiate the stealth kill. You'll have to tap the attack button as your character flies toward the nape of the titan's neck in order to complete the stealth kill. Stealth kills might not seem like much of a deal but they are a lot of fun to try for and help eliminate the constant need to engage in direct combat. Titans seems more aggressive in Attack on Titan 2 and even gaining a stealth kill can sometimes be difficult. If a titan sees your character when eyeing one out for a stealth kill, the titan will usually aggro and you'll be targeted by a super aggressive titan for around a minute. There are some instances where you can counter a titan and instantly kill the titan by pressing a button during a certain moment when dodging a titan's attack as well.

The overall gameplay for the sequel is still around the same as the first game. You still target titans then fly around them with your Omni Directional Mobility (ODM) gear. While moving around the titans, you can target their arms, legs and nape. Certain body parts can be destroyed for extra items and body parts can be chopped off to lower the difficulty of a titan. Abnormal titans (more unpredictable) and armored titans are still encountered later on in the game.

In between titan hunting stages, you'll be able to explore a town area that branches out into other areas. The town areas are a bit bigger than the simple areas of the first game and there are more options to interact with other characters this time. Each main and side character has a friendship gauge that can built up by speaking with them during certain times and by choosing the "correct" choice when given the option to respond. Building up friendships to certain levels will unlock new skills. Gifts can also be purchased from the shop and given to characters in order to boost friendship as well. Just like in the first game, you have to wander around the town segments and engage in certain conversations in order to get to the next hunting stage. Players can also upgrade equipment during town segments as well. There are scouting missions that players can engage in to gain extra items. Characters from the main story can accompany you on the missions. 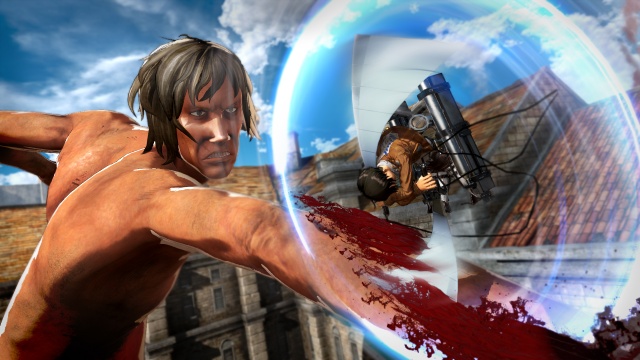 The focus on gameplay seems to be strictly centered around titan hunting this time. I did not run across any shooter minigames or titan gameplay during the story mode, but they may still be present in other modes. Thankfully, they are not forced this time, which is for the best since the hunting stages were far more exciting in the first game. Attack on Titan 2 is quite long. The game is around 15 hours long. It takes players through a great deal of the first game and then goes right into the new season 2 content once players complete the season 1 content. The only real flaw with the game is the fact that you have to go through some familiar season 1 content to get to the season 2 content, but game does mix up the gameplay and cutscenes eventually during season 1, so it doesn't feel like a total retread. If you weren't a fan of the first Attack on Titan game, then there is nothing that will change your mind with this sequel but those that did like the first game will like the second game even more from a gameplay perspective.

The Good:
+ Improved gameplay
+ Overall more gameplay options during hunts and town segments
+ Focus on titan hunting instead of other types of gameplay

The Bad:
- Season 1 content has many familiar areas
- Buildings and other objects still get in the way during titan battles
- Slowdown when too much action is on the screen

Final Rating: 80% - Fans of the original Attack on Titan will find much to enjoy with the sequel.