Dynasty Warriors 9 (DW9) is basically my first true introduction to a DW game. I have played an extremely small amount of DW8 and I have also played many of the spinoffs and copycats (Devil Kings, Dynasty Warriors Gundam, etc) but DW9 is my first game in the main series to spend a great deal of time with. The DW hack and slash formula is addicting yet it can get repetitive and that feeling seems to carry over with every DW-inspired game that I play. Dynasty Warriors 9 is the first DW with an open world map to explore and it does help out a good bit in giving players more to do while still retaining the same basic type of DW gameplay.

If you've played a DW before, you'll know that they are all loosely based on true Chinese historical events. The game's only mode is a story mode and you'll start out by choosing a lord (Cao Cao, Sun Jian, or Liu Bei) from one of the three starting clans (Wei, Wu, and Shu). You'll get to journey through an open map of China and either follow the game's main story or mess around with side missions or just regular exploration. There is a ton of things to do in the open world of China. The story mode is split up into several chapters and each chapter will last you around an hour or two even if you just play the main objective missions. The story mode is super long!

It was a bit overwhelming the first time I opened my map screen and gazed over the many icons representing places to go and things to do. Horses have never been so useful in a DW game as they are in DW9 since they serve as your only vehicle for extra speed throughout the map. Each chapter has its own unique side missions to engage in. Side missions are often fetch and retrieve missions, tutorial missions or "go here and defeat these enemies" type of missions. The side missions are your basic open world side missions but they do serve as a good break from the usual DW hack and slash gameplay. The game also allows you to engage in hunting and fishing. You'll gain extra items and experience for engaging in extra tasks and engaging in side missions will also lower the difficulty of your main objective. Thankfully, the majority of main objective missions and side missions give you the option to fast travel to those locations. You can also fast travel to other landmark areas that you have conquered. 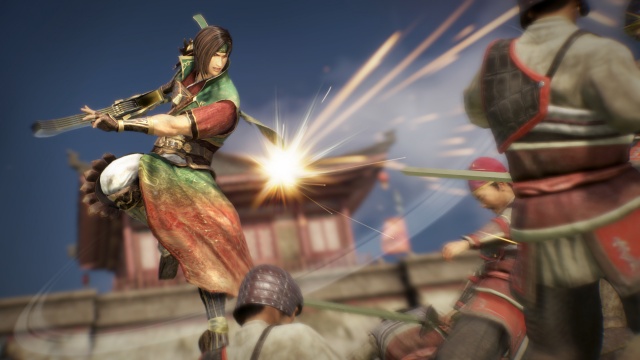 For control setup, you have two attack buttons, a musou button (super attack) and a jump button mapped to your face buttons. By holding the R1 button, you can change up your attacks by using one of the four face buttons to launch a different type of attack, such as a launcher, ground attack, knockback attack or a unique special attack. Along with this variety, the game allows you to tap the normal attack button when an enemy is in the air or on the ground, to perform unique follow up attacks. For instance, you can launch an enemy then tap the attack button to follow the enemy into the air for an air combo or you can perform normal attacks against a grounded foe for unique ground combos. Weapons can be equipped with gems that will allow for upgraded attributes or elemental attributes on most of the special attacks that can be performed. The game also has a guard break, charge attack and finisher attack. Whenever an enemy is low in health, you can tap the triangle button when the icon appears to instantly finish off that enemy. All of the latter attacks that I mentioned can be upgraded with gems as well. Along with all the normal attacks, each character also has their own musou (super) attack that can be performed in the air or on the ground for a different type of attack once the musou gauge completely fills.

As with many other DW games that I have seen, the game has tons of unlockable characters. Character designs in DW games have always been rather extreme in design and DW9 is definitely no exception. The characters bleed with personality and an extreme sense of style which helps to make them all the more interesting. From what I remember DW games usually had a rather boring story, but DW9 actually has an engaging story. At the beginning of each chapter, players will be treated to a voiced video that describes the current situation of the clans and then you'll go through several in-game cutscenes as you progress through main story missions. The game has both the original Chinese language (with English subtitles) and an English dialogue track. Naturally, the Chinese voices match the lip movement, but the English voices are decent. Normally, I gawk at the idea of using English voices over the original language for any type of game or anime that I play/watch, but the English voices in DW9 are decent. Some lines are delivered like they are being read off a script and some lines are done fairly well. Basically, the English dialogue is neither good nor bad, but somewhere in between, which makes it acceptable when playing the game.

The overall environmental graphics are composed of the type of textures that you'd see on a PS3 game. The environments are not very detailed, but they "do the job". Trees and buildings pop in suddenly while traversing the world and the flora and fauna have tons of jagged edges. The palaces that you'll visit look decent, but many of them look just about the same and don't have much of a feeling of uniqueness. All of this is kind of excusable when you see just how big the map is in DW9 however. The entire map is super huge and has a bunch of different areas to explore. You can spend hours of time simply riding around on horseback and conquering new lands that you come to. There are also many types of materials to collect that you'll find out in the world or receive as rewards from side missions. Materials can be taken to merchants to create new weapons or items. As your character levels up with experience, you'll gain points that can be assigned to various attributes. 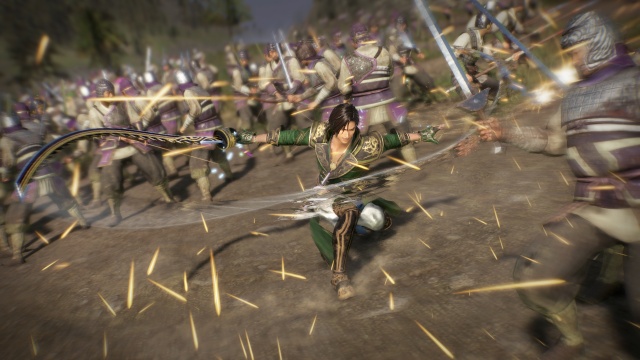 You have a choice of either "movie" or "action" settings when it comes to the game's framerate. Movie mode has more detailed textures but the framerate looks to be around 20+ fps. Action mode seems to be at around 30+ fps (much smoother) but the textures are a bit more low res. Just so you know, I played the game on the original PS4. While starting out, the game ran only at around 20+ fps with no option to change it but with the latest update (version 1.03) the game allows original PS4 owners to choose a steadier framerate, which moves a lot better! I also have to give the game some props for its loading times. The loading times are often short after the opening load time. Fast traveling around the map is done within seconds with basically no loading at all, which I found rather surprising.

If you're a fan of the DW hack and slash formula, like I consider myself to be, then you'll get the most out of DW9. The game's open world and extra tasks (side missions, material gathering, hunting) offer a good distraction from the usual gameplay. The gameplay has been given more depth, so there is more variety this time around, but it still gets repetitive after several hours. Players that aren't that interested in the DW formula might find something to enjoy with DW9 but even with all the extra additions, they feel like only a minor distraction from the base hack and slash gameplay that you'll ultimately be thrown into. Overall, the game is a good step forward for the DW series, but it still needs work in making its open world more attractive and fun to explore.

The Good:
+ Open world map to explore
+ More distractions from the DW action
+ Loads of content for story mode

Final Rating: 75% - Dynasty Warriors 9 introduces open world environments to the series and it helps out the overall gameplay a bit.