Again, this review is a bit late. Let's chalk it up to being busy with playing the game ad nauseum, getting sick of it, going back to it and finally getting to the point where I could write the review. Now, as a Monster Hunter fan since the PS2 original, I've spent - no joke - thousands of hours with the series. From buying, and initially hating the original game, to coming around to it to buying a PSP for the latest entries and learning the infamous "claw" (a weird way to hold the system for moving the camera and your character simultaneously) to the Wii and 3DS entries, I've played every game in the series for long enough that whenever my wife hears me utter the words "Monster Hunter" she groans... the true definition of a video game widow. I feel like that needed to be explained because this is going to ruffle some feathers - Monster Hunter World on PS4 is, without a single doubt in my mind, the absolute worst sequel to a great series I've ever had the displeasure of playing, putting Devil May Cry 2, Mass Effect: Andromeda and Resident Evil 6 to shame with its unbelievable awfulness and outright betrayal of everything that makes the series great. As a gamer who has loved Monster Hunter from day one, World is a game even my most horrifying nightmares could never could have produced, and the fact that it exists makes me think the series is as dead as a Guitar Hero, Tony Hawk or Golden Sun.

Author's Note: Since this review is so late, Monster Hunter Generations Ultimate has just been announced for the Nintendo Switch. There may be hope for the series yet.

In the interest of fairness, let's talk about what World gets right before we go into what it gets so, so wrong. Anyone who even passively glances at the game will notice one thing immediately - the graphics. World is among the most beautiful games I've ever played, and this doesn't just go for the characters. The environments are alive to a point that I'm not sure I've ever seen in any other video game. You get the feeling that these lush, realistic environments are characters in and of themselves, with insects, plant life, creatures and everything else you'd find in an ecosystem just being that - a living, breathing world. And on top of that, there are the monsters themselves. They look and behave just like the absolute beasts they are, and monsters like Rathalos are just a wonder to see on-screen. Monster Hunter World's graphics transport you to a world that just feels real, and with the processing power of the PS4, the whole endeavor is a visual feast one needs to see to believe.

And speaking of that processing power, another positive is that the locales in which you are hunting are no longer divided into zones; it is all one big open area. This makes the fights seem more organic and real, but at the same time removes the necessity for actually tracking a monster before you bring it down. If you've played another previous game in the series, you know that paintballs - items you toss at the monster to help track them on your map - are essential, and the thrill of having one wear off, leaving you to blindly search for your prey is both exhilarating and frustrating, and to me anyway, is an integral part of the Monster Hunter experience. So when you don't need to hop from zone to zone, actually hunting your prey, this "improvement" kills much of the suspense for old school players like myself. Instead, players have a Scoutfly, a little bug that automatically picks up traces of the monsters as you move through the environment, essentially leading you right to it in most cases. It's a good think the game was called Monster Tracker, because that part of the hunt is all but on autopilot in World. 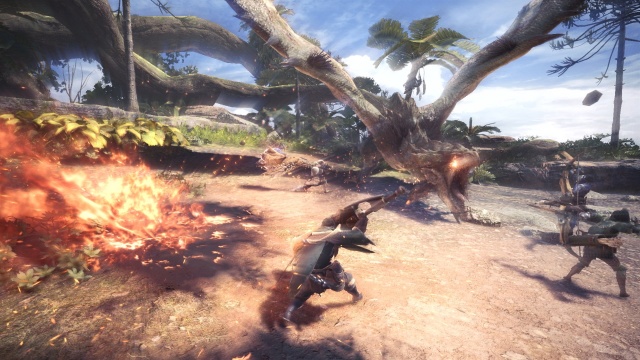 It kills me to say it, but that really is where my positive impressions end. Savaging a series so close to my heart is no easy task, and this review is one of the toughest I've ever had to write (and I've been at this for almost 13 years). The best way to sum it up, before we get into the nitty gritty, is that Monster Hunter World is Baz Luhrmann's "Romeo and Juliet". It was envisioned as something a modern, sophisticated audience would love, but the end result is a sloppy, disgusting mess that destroys nearly everything that made the original such a timeless piece of history. With that said... let's get to the unpleasantness.

My first complaint is that the monsters themselves, including the ones who usually hamstring players into quitting entirely, have become mere mewling kittens when it comes to bringing them down. Let's look back at the previous game in the series for this, shall we? A Tigrex or Gore Megala, especially solo, was a video game boss to rival Mike Tyson (or Mr. Dream... ugh) in terms of difficulty, requiring skill and timing, especially on higher ranks. Here? In Monster Hunter World? These once fearsome beasts - and ones like them - pose almost no threat to a skilled solo player. Even the famous wall, (a wall being a monster you simply can't best) Kirin is barely a threat, like beating a kitten to death with a pillowcase full of doorknobs. It is beyond shameful that Capcom had to dumb down the challenge to keep western players engaged, and longtime fans of the series should be outraged. But guess what? They aren't.

Another huge strike against the game is that solo play is basically a sin. Besting the tougher monsters (or which there are woefully few) all but requires multiplayer squads. In previous games, killed hunters could and would blast through single player quests alone, and tackle multiplayer quests in a similar fashion. Not so much with Monster Hunter World. If you plan to make it through all the hunts solo, you have made a gravely stupid decision. For single player enthusiasts, Monster Hunter World is basically a game that should be passed over in favor of something more in line with your preferences. Completing some of the quests without the help of others is a complete impossibility, and the game more than suffers for it.

Thankfully, the loop of fighting, carving and crafting is still intact, though somehow feels simplified, if I had to guess, to help bring in a new crop of fans. And guess what? The less complex systems seem to work in favor of making newbies have a easier time getting their feet wet. That theme runs through more of the game's systems than I'd care to go into. Perhaps most damning of all is the lack of a G-Rank, a set of end game quests tailored for only he most hardcore of players. Not every Monster Hunter game includes these, but if the aim was to bring in new fans, why hamstring the content, especially when so many of the monsters seem easier to bring down than ever before? 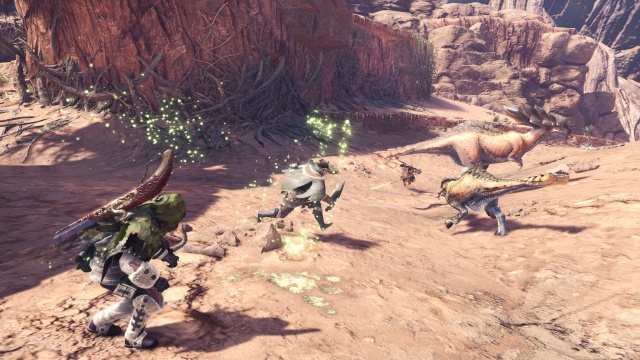 Ok, so if you are still with me - and I imagine many of you've labeled me a crackpot and moved on - I'm going to wrap things up with my main complaint with Monster Hunter World. The Monster Hunter series, despite its beginnings, is a portable series. Period. It belongs on portable consoles. I don't care if it is the Vita, the 3DS, the Switch or hell, even the Game Gear, this is a series that needs to be played on a console you can take with you. Why? Ask Japan, where dozens of people meet up every day, 3DS systems in hand, to battle monsters in groups. Ask the people last March, in the long lines outside GameStop, waiting to buy the Switch and hunting as a team. Ask the kids in the college cafeteria, huddled around a single table, all attempting to take down the roughest of foes. With World, all of that is dead in the water. Sure, you can play online with your friends and even randos. But without the face-to-face interaction, the magic is dead. More than any of the other "improvements" made for Monster Hunter World, this is by far the worst, and makes the game feel like a pale imitation of the great games that preceded it. If you ever enjoyed a Monster Hunter multiplayer session with a gathering of friends, Monster Hunter World is NOT for you.

I won't rehash the problems I had with World simply because they make me profoundly sad. I wanted to like the game, I hoped the new direction would bring the series to a new level, but instead, the whole thing blew up in my face like a Marshmallow Peep left in the microwave too long. The game has thousands of fans - for reasons that are completely beyond me - and I'm sure this review with catch me some serious online flack. But what would you rather read? A dishonest reviewer towing the line of what is popular or one who you may disagree with, but you know you are getting an honest point of view from? I'd ALWAYS choose the latter, so there you have it. Let's hope the next entry in the series undoes some of what World ruined, makes a return to a portable console and therefore a return to what made the series a worldwide smash in the first place.

Final Rating: 55% - A beautiful new Monster Hunter, but devoid of the soul of the series.