So it is finally here. Since seeing the very first trailer and gameplay footage of Dragon Ball FighterZ, the gaming world has kept up a steady drumbeat of excitement for the game, with new trailers, character introductions and constant debate keeping things going. Any consistent reader of this site knows that I'm debatably the world's biggest Dragon Ball fan, and said reader would have to (correctly) assume I'd be the one reviewing this hotly-anticipated title. Eagle-eyed or longtime readers might also remember that I'm not the biggest fighting game fan in the world, having been turned off by games that require too-complicated inputs, enough rules to fill a telephone book-sized manual and reflexes that border on the superhuman to be successful. With that strange pedigree, you know where I'm coming from with my review of perhaps the biggest, most important fighting game this generation (sorry Marvel and Capcom). Hint: I've got (almost) nothing but good things to report, so Dragon Ball fans and fighting games rest assured, Dragon Ball FighterZ is the game you were hoping it would be.

Before we get to talking about the game itself, I think we should get the "Dragon Ball fan" business out of the way. Dragon Ball FighterZ is quite simply the best looking, most faithful recreation of the classic anime/manga ever produced in video game form. Previous games have attempted to take Dragon Ball into the 3D realm, and while this does work in its own way, 2D is frankly the only solution for so faithfully representing the source material. Dragon Ball FighterZ looks like the developers colorized the manga, animated it beautifully and gave us, the players, full control over the action on-screen. I've previously gone ga-ga over new hand-drawn 2D opening segments in otherwise 3D Dragon Ball games, but FighterZ eliminates that parity by making the entire game a skillfully, wonderfully handled 2D action sequence. The quick cutscenes highlighting specific attacks, the fighter intros... all of it is ripped straight from the pages of the manga, right down to specific camera angles and facial expressions. FighterZ is without question the best looking Dragon Ball game to date, and with literally dozens of them being released over the last 30 years or so, that is high, high praise. 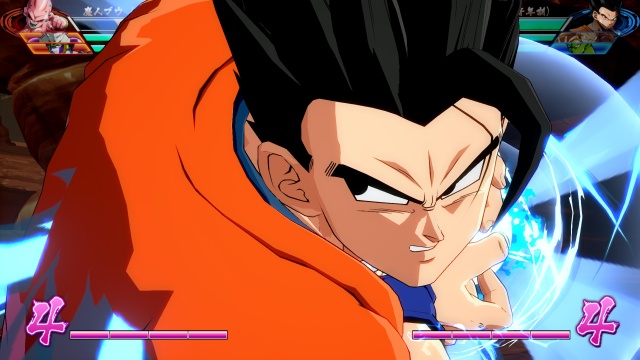 Ok, for those who aren't mega Dragon Ball fans, or they are simply more interested in the game itself, you can tune back in now. The genius of FighterZ is that, like most other fighting games I've found myself falling in love with, it is extremely easy to learn, but deceptively tough to really nail down. The controls are pretty easy; you've got three attack buttons, light, medium and hard, and the fourth attack button is usually a projectile or energy blast, depending on the character. FighterZ's combos and specials are usually pulled off with combos of these four buttons; those who never managed to grasp the "quarter circle back, up, down, left, right" nonsense so popular in fighting games for a while will be just fine. The most FighterZ ever expects is simple controller movements paired with the right combination of attacks and you'll be pulling off the coolest moves and combos in no time. With this simplicity, of course, comes the ability to button mash your way to victory, but the genius part is that it only takes a little practice to get good enough to counter the more damaging combos produced by squishing light and medium attack over and over. Losses to button mashers will happen, yes, but countering those tactics and learning the ins and outs of how to do so is what makes the fighting so addicting, fun and easy to jump back into, even after 20 or 30 rounds.

Learning the characters' individual moves and combos is just as important, and fun, as learning the overall battle system, and seeing as you are generally playing as three characters at once, you're going to need to get a grasp on more than one or two favorites to really succeed. FighterZ really clicks into place when you discover a team that feels good to you, and lets you play each members' strengths to your advantage. At first, I found myself drawn to Captain Ginyu because of his attacks summoning in other members of the Ginyu Force, which is definitely fun to watch, but eventually I settled on my team of Android 18, Freeza and Vegeta, a trio I think was a decent mix of liking the characters themselves and being able to utilize each in effective ways. The game's roster is big enough that you can make just experimenting with different teams a meta game in and of itself, and promised DLC will only add to that down the road. It's worth noting that while the original Dragon Ball is not well represented except by characters who eventually found their way into Dragon Ball Z, Dragon Ball GT and the Dragon Ball movies are mercifully not represented, and the current anime, Dragon Ball Super, is present and accounted for. The Super Saiyan Blue forms are here, as is Golden Freeza, as well as newer characters Beerus, Whis, Goku Black and Hit. I suppose that DLC may one day add Broly (ugh), Bardock (yay) and others, but seeing GT left on the outskirts was a big plus for this fan. 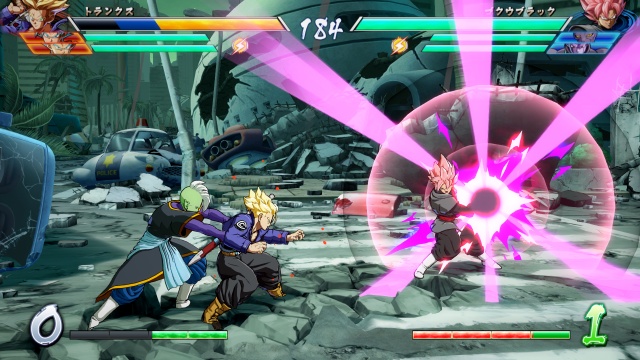 Aside from my obvious love of the property, the thing about FighterZ that really spoke to me was the inclusion of a lengthy, and actually interesting, story mode. It took about 10 or so hours to make it through the whole thing, and the introduction of a new character, Android 21, was just the added ingredient to make the game feel like a fresh new story, rather than a simple retelling of the events of the series. The story mode is dragged down a bit by somewhat pointless fights with clones and the like to pad out the experience, but overall it comes off as a very "DBZ" type tale that fits with all the series' trappings. For fighting game traditionalists, there is also the standard arcade mode, where you just battle your way up the ranks, and this offers its own kind of fun, seeing which characters you have a decent enough handle on to make it through to the end. Weirdly, though, the difficulty between matches seems a bit all over the place, with one match feeling super easy only to have the next clobber you relentlessly. Remember Street Fighter II? Everyone does. The difficulty between matches can go from Vega to M.Bison, the back to E.Honda and back to M.Bison again. It's not really a negative, it just feels weird not to have the difficulty of your opponents scale naturally harder as you move up.

As with most fighting games these days, the part most potential players are interested in is the online segment of the game. While the PS4 and Xbox One versions are generally identical, this is the one area I found them to be slightly different, though I'll get to that in the next paragraph. I'm not much for online games myself, but FighterZ was one where I generally enjoyed the entire experience. The lobby between fights is a big reason for that. Players are represented by mini (chibi) version of their chosen characters, and can communicate with other waiting players with all kinds of unlockable emotes, stickers and even stills from the actual show. I'm not ashamed to admit I had more fun here than I did with the actual online fights, and unlocking more of the cutesy stuff for use in the lobbies was a big drive to keep playing, online and off.

Ok, now the difference between the two versions of the game. Everything offline, in both the Xbox One and PS4 versions, was absolutely identical, as far as I could see. Neither game suffered any noticeable slowdown or frameskips, and it looked about equal across both versions. The differences came through in the online mode, though. The Xbox One version suffered a bit of lag that I didn't notice with the PS4 version, and I had several disconnects that Sony's machine didn't seem to suffer from even once. Patches may make the difference eventually, but right now, though, it seems the PS4 version is the clear winner, at least when it comes to smooth online play. Now if we could just get a version out on the Nintendo Switch... well, that would be the cat's pajamas (and EASILY my preferred method of play, as is the case with every game these days). 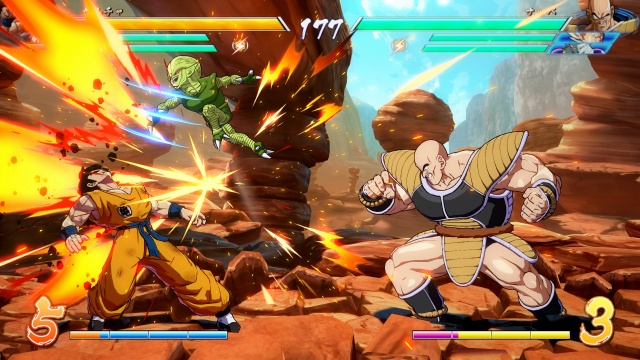 The last thing I wanted to mention, and I saved it for last as it won't make much difference to a lot of people, is game's Easter eggs. These usual come in the form of special animations triggered by pitting certain fighters against each other, or by placing certain fighters on the same team. These include famous scenes like Krillin's death at Freeza's hands followed by Goku's Super Saiyan transformation, or Gohan's Super Saiyan 2 explosion after Cell kills Android 16. These are taken straight from the anime/manga, and further solidify the game's quality in the eyes of super fans. Even better, though, are some the "what if" interactions, like Super Saiyan 3 Gotenks taunting a furious Nappa over his inability to go Super Saiyan. In the series, these characters were never alive at the same time - not even close - so seeing these cute little interactions was the cherry on top of an already amazing game.

For a game as anticipated as Dragon Ball FighterZ, it would be extremely easy to have the final product be a let-down in some way. It isn't. Everything you hoped FighterZ would be, it is. It's a dream game for Dragon Ball die-hards, a great new way to test your skills for fighting game nuts and an all-around great experience for everyone else in between. The visuals are as uniquely "Dragon Ball" as any other game ever made, and shame most of the older DBZ games that have aged well (a lot of them haven't). The story and arcade modes present plenty of challenge and things to keep you occupied, and the roster is large enough to make no two battles feel the same. And, refreshingly, the online modes appeal to not just those who have immersed themselves in online battles for years, but newcomers and even just the mildly interested as well. At present time, the PS4 version looks to be the one to get due to a few issues with the Xbox One's online capabilities, but both versions perform even better than you might have hoped. For a game with nearly a full year of hype behind it, Dragon Ball FighterZ delivers in ways that will exceed even the most lofty of expectations. This is a fighting game for the ages.