Assassin's Creed Origins represents both a new beginning and a departure for the series, and not just because it begins at a time in history before there were any Assassins or their rivals the Templars. Origins blows up the scale of the series to a level never seen before - even Black Flag is small in comparison and that game's map was mostly open ocean. Origins adds a new fight system for the series that requires more tactics than rhythmic button tapping timing, and adds more RPG style depth than ever before with multiple deep skill trees, an enormous variety of weapons, and crafting elements. In some ways it's almost like Abstergo got a little sloppy and contaminated one of its Animus machines with some DNA from Far Cry and The Witcher. Does it all work? For the most part, yes, although I wonder how some Assassin's Creed purists will feel about leaving the crowded confines of cities behind to cross an ocean of sand dunes on camelback with someone who isn't even an Assassin.

Assassin's Creed Origins is set in Ancient Egypt around 50 BCE, a time when Ancient Egypt was already ancient. This time period gives the game the opportunity to create both a living, breathing recreation of one of the world's greatest ancient civilizations and a world filled with long forgotten tombs and temples to explore and, well, raid. Ptolemy is pharaoh, but he is not well-liked by the people and must contend with Cleopatra and the Romans and their competing schemes for power. The real power behind the scenes, though, is The Order of Ancients, a secret society with a fascination with the occult. The protagonist that you'll play in this world is Bayek, a warrior protector of the Pharaoh and the people of Egypt known as a Medjay. The Order of the Ancients is responsible for the death of Bayek's son, and so he embarks on a personal vendetta to take down their leaders one by one. His quest for revenge will sweep him up in the far greater currents that are running through Egypt's politics, and his personal mission will have a profound effect on the future of Egypt and the world beyond.

Egypt in Origins is vast, encompassing all of the land area occupied by the Egyptian civilization, from Alexandria and the Mediterranean in the north to the vast desert in the south. The game's map is divided into almost 30 provinces, each of which will take a few hours to explore and complete all of the missions, activities, and challenges contained within. While you can ride from one end of Egypt to the other, it's not advisable to do so. To keep you focused on pursuing the game's story on its desired timeline, each region is tuned to a level range and if you wander into a high level zone before you're ready you'll need to avoid contact with the local enemies and animals or you'll quickly be quickly dispatched. There is a certain thrill, though, in doing things like entering Giza early in the game and racing past hyenas that can kill you in one bite so that you can scale the Great Pyramid and then go sliding down its other side. In fact, climbing many of the game's synchronization points leads to some impressive sweeping vistas of the surrounding area and landmarks. After you soak it all in for a few moments you can use the game's photo feature to snap an image to enjoy anytime later. The game's recreation of Ancient Egypt is also impressive on a much closer scale. The people in the game don't feel like props, walking back and forth to give the impression that you're not really alone in the world. Rather they're actors in a living world, going about their daily lives, farming, trading, talking, eating, and living. I was surprised to find that I wasn't just moving through Egypt to complete missions, but was connecting to the population as well. 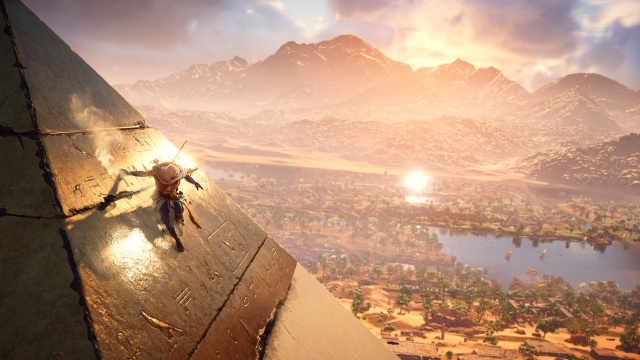 In effect the level ranges on the provinces don't make the game quite as open as it first appears to be, but they do help to keep you on the right path to follow the story missions. Because the story missions each have a recommended level for taking them on there can be some time between them which can at times make the story feel a bit disjoint. However, there's a lot to do between those story missions so it doesn't really feel like you're spending the time between them grinding your way to a high enough level to take them on. Since you can also earn experience by discovering new locations, finding treasure, and completing the abundant number of side quests available, the grind is never really a grind in the traditional sense.

With such an open world, there are few urban areas and dense clusters of buildings, so in Origins there is less of an emphasis on running along the rooftops of a city using athletic parkour moves to swing, jump, and climb your way from one structure to another. You still have these abilities in Origins, but you just won't have the opportunity to use them as often. This does have the benefit that it has led to the elimination of rooftop chase and evade missions which I had a tendency to fail at a frustratingly too high of a rate due to prior game's enthusiasm for latching you onto the wrong thing when trying to move between buildings. Ironically, Origins has the best implementation of the series' parkour feature, yet, being smoother, more natural, and less prone to error than ever before. 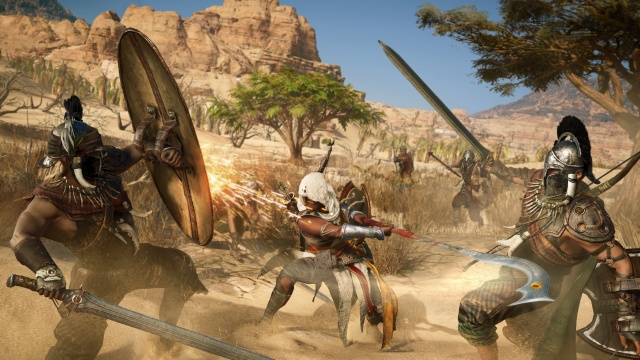 Your tour of Egypt isn't a vacation, though, and you'll find yourself in plenty of fights with soldiers, bandits, and the local fauna, and if you've played Assassin's Creed games before you'll find that these fights are decidedly different than before. Stealth kills are still a big part of the game, and sneaking around into position to kill unsuspecting enemies from behind, above, or below is an important way to even the odds before a battle begins (or to end the battle before it even begins). If you'll be trading blows the game uses a lock-on system, click R3 to lock and flick the stick to switch to a new enemy. There are both light and heavy attack buttons tied to R1 and R2, with the expected function that one hits light but fast and the other hard but slow. The combat system is now more tactical, emphasizing dodging or blocking attacks while looking for openings to strike. It makes the fights more engaging than they were in prior games, and works well when you're facing one or a couple of opponents. If things turn into a mob scene, it becomes pretty difficult to manage, but I suppose that's how things would go in a real-life melee. I could usually get through those situations in previous Assassin's Creed games, but I found it difficult to do so in Origins. There are a lot of weapon types in the game, from small swords to massive scepters, and you'll need to adjust your tactics to the weapons that you're using because they will have an effect on your speed and timing in battle.

Bows are also an important weapon and come in four classes. Light bows are good for rapid fire shots, so are useful at close range. Predator bows are perfect for sniping enemies while trying to remain hidden. Warrior bows fire multiple arrows at once, so are good for thinning out a group of enemies coming towards you. Finally, hunter bows are used to bring down animals or enemies with a single, powerful shot. Your bow is tied to L1 while the attack buttons are on the right triggers, so you can switch between your bow and your melee weapon quickly on the fly.

Attacking a camp or fort to assassinate a high-value target located within follows a process that will be more familiar to players of Far Cry than Assassin's Creed games. The best thing to do first is to scout the enemy encampment to locate the positions of its garrisoning soldiers and your target. This is done with the ancient world equivalent of a UAV, your trained eagle Senu. Release Senu and you can control him in flight, literally getting a bird's eye view of the area so that you can mark the locations of enemies and other items of interest. What you do next is up to you. You can sneak around to thin the enemy ranks with some stealth kills, snipe a few with your bow, release their caged animals and let a lion do the work for you, or come galloping in on a camel and make a charge right for your target. You have a lot of freedom as to how you approach things in the game, and that extends beyond the encampment battles. More than in any Assassin's Creed game I've played, I felt that completing the missions' goals were more important than how they were accomplished. 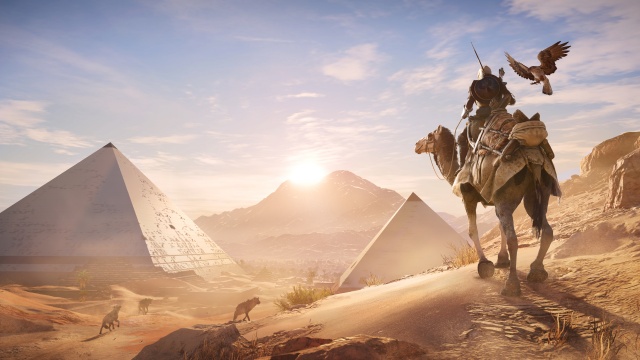 Assassin's Creed Origins delivers at least 30 hours of gameplay if you stick to the story and enough of the side quests to help you level up along the way. There's plenty in the game to keep you occupied well beyond that mark, and it's a testament to the game's design that the game world provides a legitimate and tempting distraction to what's an intriguing and exciting story in its own right. Hopefully Origins is the origin of a new renaissance in the Assassin's Creed franchise.