Along with the announcement of Marvel vs Capcom Infinite at the PlayStation Experience 2016 event, Capcom also announced a PS4 version of Ultimate Marvel vs Capcom 3 (UMvC3), which is now out on the PlayStation Store. UMvC3 is a 3v3 tag team fighting game with a mixture of 51 characters taken from Marvel comics and Capcom games. The "Ultimate" version is an upgrade to MvC3 that added 12 new characters and adjusted some of the character balancing from the original MvC3 release. The MvC series has gotten super popular for its eye-catching visuals and overall insanity that can be displayed on the screen during matches over the years and it still draws in the crowds at tournaments. MvC is like the ultimate party game for fighting game fans.

The PS4 version of UMvC3 collects all the previously released DLC for the game into one bundle. You get the original DLC characters, Shuma-Gorath and Jill, already on the character select screen and all additional characters outfits are included as well. For those wondering, Magneto still does not have an extra outfit. The only true new addition to the game is a digital copy of the "Perfect Works" artbook for the MvC series. The book is around 250+ pages and you can pull it up and look through it on the bonus content menu. If we want to get picky, the ending credits screen has an updated look as well. 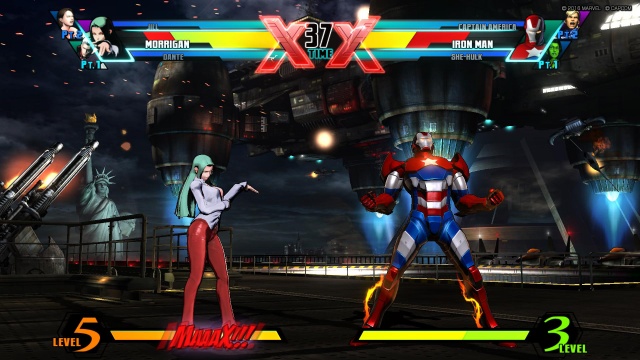 Besides the digital book and updated credits, the game remains entirely the same. The game already ran at a fairly smooth 60fps on PS3 and Xbox 360 and that still remains the same for the PS4 release. All animation is smooth and so are the overall controls. The game has local play for 2 players and it still has online play. If you liked the game "as is" on PS3 and Xbox 360, you will enjoy this release all the same since it doesn't really change much at all.

Online play is one of the major problems with the game however. The game still uses the exact same netcode as the original release, so even with the most perfect connections, you'll still have input lag. Back when UMvC3 was first released, this kind of online play was acceptable since all fighters had it, but with the use of the more recent rollback netcode (SFV and MKXL) that makes input lag basically nonexistent, it's really sad to see that Capcom kept the old netcode with the release of UMvC3. This would have been such a great chance to fix the online play and make this the true ultimate version of the game. But yeah, if you play online, get used to the input lag delay with all connections and you'll have to get adjusted to some very heavy input lag with some of the worst connections. The game still has ranked and player matches that you can search for or you can create or enter a lobby (and yes, it still has spectator mode that was first included in the Ultimate release).

If you've been keeping up with tournaments or just checking online for all the different techniques and combos that have been found for each character, you're likely to notice that this game has some major trouble with character balance. Characters like Morrigan, Vergil, Doom, Zero and many other characters are way overbalanced compared to some of the other characters and this all still exists in this rerelease. There were no balance changes whatsoever even though some characters are obviously way too powerful. In all honestly, this was expected with the way Capcom and Marvel work together, but I simply can't deny that it's still a missed opportunity to finally fix the game that has only been updated once or twice in the two months after its release. 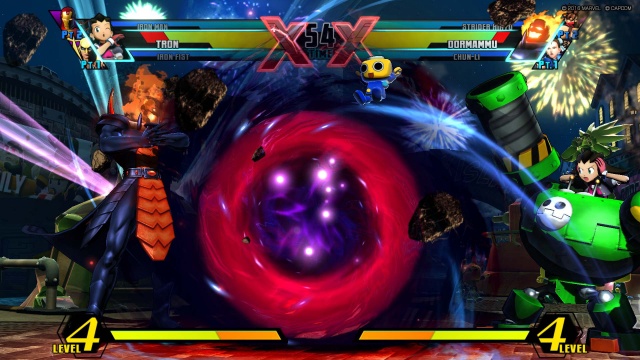 Either way, this is as "Ultimate" of a version of Ultimate Marvel vs Capcom 3 as we will probably see since Capcom is hard at work on Marvel vs Capcom Infinite by now. It's really nice to see that UMvC3 actually got a rerelease with how rare it has been getting over the past few years since Capcom pulled the digital versions and all DLC off the respective online stores so just the fact that it even exist is a major plus and the fact that we are getting a sequel is even better. If you don't already have UMvC3 then I'd highly recommend this release since it's still a fantastic fighter. Even with the unbalanced characters, it's still loads of fun to mess around with. The single player and local play works great but if you plan on going online, you need to go to training and practice the game with input lag (it's actually an option to practice with a simulated lag) since you can't play without input lag online with its current netcode.

The Good:
+ The ultimate version of the game with all DLC
+ The fact that this rerelease exists and we will get a confirmed sequel

The Bad:
- Nothing truly new besides the digital artbook
- The game is in major need of a balance update
- Online play feels very dated with its constant input lag

Final Rating: 75% - UMvC3 is now up on the PS4 store, but if you already have another version don't even bother since it's very much a last gen port for the most part.