Capcom has recently released Dead Rising, Dead Rising 2 and Dead Rising 2: Off the Record with upgraded content for current systems. Dead Rising 2 continued the same sandbox zombie action gameplay that made the first game so addicting. This time you take on the role of Chuck Greene in the middle of a zombie outbreak in Fortune City. Chuck goes to Fortune City to compete in the Terror is Reality event to raise money so he afford Zombrex to keep his little girl, Katey, from turning into a zombie. Before long, a zombie outbreak occurs and Chuck is stuck in the middle of the incident and must help out in saving survivors around the casino.

If you've played Dead Rising 2 (DR2) on PS3 or Xbox 360 then you no doubt remember the slowdown/choppy gameplay and the long load times in them. The recently released version of DR2 improves upon all of this. The games runs at a very smooth 60fps during gameplay and cutscenes (for the most part) and the load times have been improved considerably. DR2 load times on last gen systems took around a minute per loading screen and the load times on the latest version take around 10 seconds at the most. There is still just a bit of choppiness or slowdown when too much is on the screen during gameplay or a cutscene at times but it has been GREATLY toned down from the past console releases. The overall gameplay stays the exact same since DR2 modernized the control scheme and improved upon its successor a great deal.

DR2 takes place in a casino that has a few malls inside of it. The game has a slightly bigger area to explore compared to the original Dead Rising. DR2 still has a huge assortment of weapons to use throughout its malls and casinos and the main character can now make combo weapons. Through the use of maintenance rooms, you can grab two weapons that have a wrench icon above them and combine them (using duct tape) into a more powerful weapon. Weapons that are combined are given a scratch card in your inventory and that scratch card can be replaced with a combo weapon card once you level up enough to unlock the card or find the combo card in the environment. Finding the combo weapon card will give you access to each combo weapon's full list of attacks. DR2's leveling system is the exact same as DR1's leveling system. By saving survivors and performing other feats you'll gain experience that will allow Chuck to level up and gain an increase in stats, unlock new moves and gain access to more combo cards. 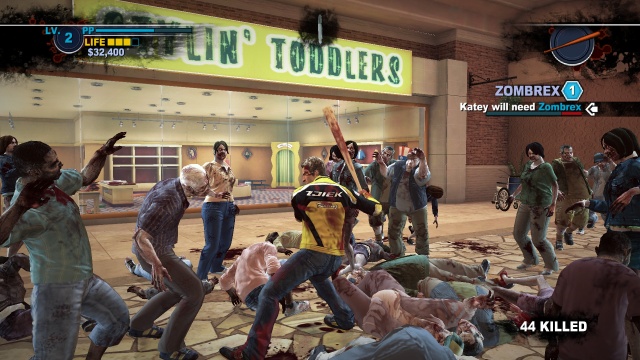 The camera system from the first game is now gone. The focus on combo weapons and need for money basically replaces it. You'll have to gain money through a variety of different methods in order to afford items in the game at times. Chuck can play roulette, slot machines or perform a variety of other methods to gain money. Chuck must help out survivors and fight off psychopath bosses during extra missions. The main story is still told through case files (story missions) just like in the first game. You'll have to pay attention to the current time and make sure that you can perform the objectives required in each case file in order to keep the story going. Along with case files, Chuck must give Katey zombrex every day between certain time periods and failing that is like failing the main story.

After replaying the remastered DR1, DR2 is such a joy to come back to. The game fixes every flaw that I found in the original and it greatly enhances the overall gameplay. The controls in DR2 are modernized and you no longer have survivor AI that gets stuck behind objects while following your main character or gets killed stupid easily by zombies. One might say that the DR2 survivor AI is too good but you still have to look out for them as you lead them back to safe zones. The addition of combo weapons in DR2 is a genius feature and one that has stayed with the series ever since DR2 so that just goes to show how great of a feature it still is.

Besides the main game there is also a competitive multiplayer game in the Terror is Reality (TIR) game show mode where 4 players can compete against each other in a total of 9 different zombie splattering events. DR2's opening event is basically a tutorial for one of the events and you'll find that event and 8 others waiting for you in the multiplayer mode. TIR offers ranked and private matches and is a very addicting way to earn money for your main save file. All money that is earned through the mode can be transferred to any save file of your choosing. The player that gains the most points through 4 events is allowed a head start for the final event and all points earned goes toward a final score of cash at the end of the TIR event. TIR seems to play just as smooth at it did on past consoles, depending on the host's connection. If you're a fan of Dead Rising 2 then you should definitely pick up this remastered version of the game if you play on consoles. The game improves upon the original game a great deal and still has that same addicting factor of leveling up and time management that made the original DR so fun to play.

The Good:
+ Improved fps makes for smoother gameplay and cutscenes
+ Load times have improved considerably over the past console versions
+ DR2 is still a great improvement over the original

The Bad:
- Slight choppiness/slowdown at times

Final Rating: 90% - Dead Rising 2 still feels like such a great improvement over the original and with this remastered version, most of the technical issues from the past console versions have been fixed.