Frank goes to the mall at Willamete and helps other survivors while he tries to find the source of the zombie outbreak in the area. Nearly anything that you can find in the stores around the mall can be used as a weapon. From toy swords, to mannequin parts, to chainsaws the creativity in your attacks against zombies is quite high. Aside from killing zombies, you must engage in main story quests and side quests which are all timed. Unlike Dead Rising 3, the previous Dead Rising games required a good bit of time management in order to solve all side quests and keep up with the main story of the game. You have to literally memorize the original Dead Rising games in order to see everything that they have to offer since you have to know exactly where to be at what time. That is partially the fun of the old-school Dead Rising games since you have to plan out what you do carefully and make sure you have enough time to do it.

The original Dead Rising had major difficulty curves in some areas and they are all still here. The convicts psychopath bosses that eventually appear in the park are still there and just as hard as ever if you don't know how to deal with them - they also still respawn at 12:00am every night to make them even more frustrating. One of the major flaws of the original Dead Rising was the survivor AI and that is still present in this release. Once you rescue a survivor, you must lead them back to the safehouse in the mall and you must protect them from zombies while leading them back. Survivors have super bad AI in the original Dead Rising up to the point where they will stay running against objects that get in their way or stop to try to fight a single zombie that keeps hitting and grabbing them up until they get surrounded by zombies. I suppose that Capcom wanted to keep the original feel of the game for fans that loved the challenge of going out of your way to help each survivor which is why we didn't get an upgrade to their AI. Either way, if you've played the game before then you know what to expect with the survivors and if you haven't played it before then just know that you have to give your all to get some of the survivors back to safety. 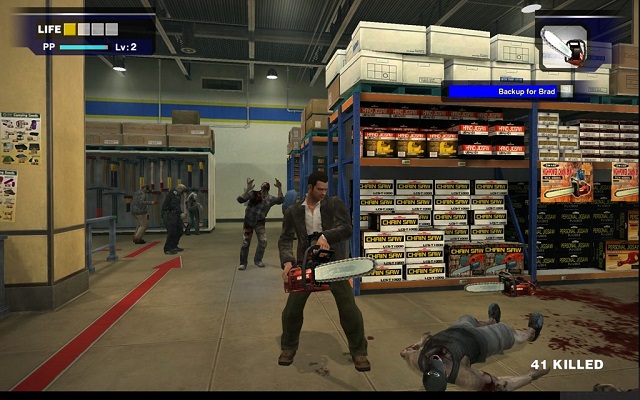 Along with the survivor AI problem, the original Dead Rising also had an issue where you could only save on one save file. On Xbox 360 the only way to save on multiple save files was to have a memory card in the system so you could switch between your HDD save and the memory card save file. Thankfully, Capcom allows you to save on up to three save files this time, which is extremely helpful in a game where it is easy to get stuck in. If you fail to solve a case file (story mission), you will fail the main story and have to stick around in the mall and perform side quests until your 72 hours of the game are up, so having separate save files can really help out for continuing the story if you accidentally fail a story mission from lack of time.

Capcom has also slightly updated the controls for the game. In the original, you had to move the camera with the left thumbstick while aiming, but now you can switch it over to an "arcade" control setup to where you can use the right thumbstick to move the camera while aiming. This makes shooting a lot more pleasant. The shooting controls in Dead Rising are well known for being clunky, but they are easier to manage with a more modern way of aiming. The aim mode is still activated with an RE4 control setup where you have to press the R2/RT button to aim and press the Square/X button to fire since the L2/LT button is used for aiming Frank's camera.

Other than the control and save update, the game now runs at a very smooth 60fps. The graphics still look just about the same as they did in the original Xbox 360 release. The original game already moved really smooth so the increase in fps only feels like a slight improvement over the original. The music in the game is still fantastic. Dead Rising always uses licensed tracks for psychopath bosses and the original game has some of the best tracks for certain bosses such as the Convicts theme and the theme for the supermarket psychopath boss fight. If you're a fan of Dead Rising or a newcomer to the series, this rerelease of Dead Rising is a definite game to pick up with its cheap price. The fact that it is now finally on a Sony system and on PC is reason enough to pick it up for fans outside of Xbox systems.

The Good:
+ Improved fps makes for smoother gameplay
+ We finally get more than one save slot!
+ Controls have been modernized slightly for weapon aiming
+ The game is still just as addicting as it was back when it was first released

The Bad:
- The survivor AI is still just as bad as ever

Final Rating: 80% - The original Dead Rising is a fantastic start for this zombie beat'em sandbox series and this new release is now the ultimate version and a good reason to pick it up.