Nioh is an action role-playing game developed by Tecmo exclusively for PS4. Dark Souls fans and Ninja Gaiden fans will want to check this out since it's an overall good blend of both games. At its core, the game borrows many aspects of Dark Souls, but you can easily tell that it's made by Team Ninja with all the fast action swordplay and use of other weapons. It's like playing a ground-based Ninja Gaiden with a much deeper combat system and with rpg aspects that you'll find in Dark Souls. Nioh has loads of things to do and loot to find and the character customization could lead to many different builds for future playthroughs.

Nioh takes place during the 1600s in the Sengoku period of ancient feudal Japan. You take on the role of William Adams, an English sailor who arrives in Japan while following his nemesis, Edward Kelly, who is gathering Dark Amrita for his own agenda. Before long, William is enlisted by Hattori Masanari to help defeat the Yokai (demons) that are surfacing from the chaos of war. If you're a fan of Samurai Warriors, you'll probably find a lot to like in Nioh's usage of Japanese historical figures. The game blends Japanese history with fictional supernatural elements. Most of the story is told through cutscenes and text with voice acting in between stages much like Samurai Warriors or Ninja Gaiden. 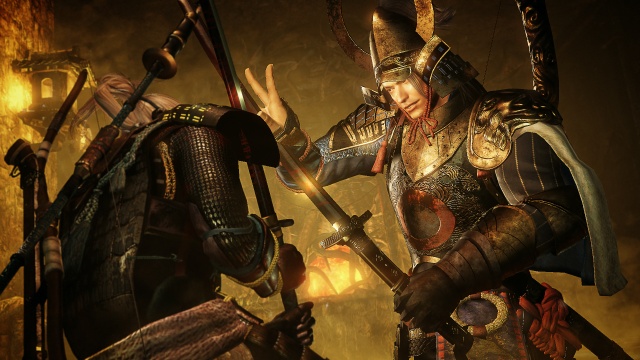 The game is composed of main missions and sub missions. The main missions play out just like an area of Dark Souls. You get to explore a vast area and fight enemies and pick up tons of loot along the way and eventually you'll fight a unique boss shortly before ending the mission. You'll unlock several sub missions as you progress through the main missions. The sub missions usually take you through an area that you have already been through only with different enemy setups and a powerful normal enemy that serves as the boss of that stage. Some sub missions change it up a bit by offering a single powerful boss however. Tutorials will unlock as you progress through the game and you'll mainly want to play these to get unique items or skills that are exclusive to that tutorial mission. The game does a great job with teaching players all the basic aspects of the game.

Nioh has a lot to offer through its loot that you'll find in enemy item pickups and treasure chests. You'll likely be equipping a new weapon and new gear multiple times per stage so you'll be grabbing SO much extra loot along the way. Players will be getting so much loot that it becomes overwhelming on the inventory screen, but you can sell the loot that you don't need for Amrita or Gold. One cool part about the game's weapons and armor is that you can take a high powered armor/weapon then combine it with a lower level armor/weapon and switch their appearance while upgrading the armor. So if you find a helmet or piece of armor that is high powered but ugly, you can switch it to look like a lower-level armor that looks more appealing while you keep the higher stats. This is a great way to keep your favorite armor style, but eventually, you'll probably get tired of all the item swapping and just start to equip whatever equipment offers the best stats at the rate you'll be receiving new equipment. All equipment has a certain rarity rating shown by the color of the name of the equipment.

Now let's dive into the best part of Nioh - the combat. The game seems to be set to a smooth 60fps at all times so all the combat is usually super smooth. You can actually adjust the game to where it will run at a smoother framerate or have higher visuals. Nioh has a good overall selection of weapons, such as dual swords, swords, kusarigamas, axes and a few other weapons. Each weapon has two button attacks that can lead to combinations and all weapon types have unique skills associated with them that can be unlocked for extra attacks. You also have the option of a low, medium or high stance that can be switched between during gameplay. Low stance is more of defensive stance with quick attacks and more maneuverability, medium stance is a good balance between defense and attack power and high stance is the most offensive stance that will give you some of the highest damage per attack. Each stance will give a weapon new attacks and it changes the way you will dodge. There is also a weaponless stance that allows you to recover ki energy faster. 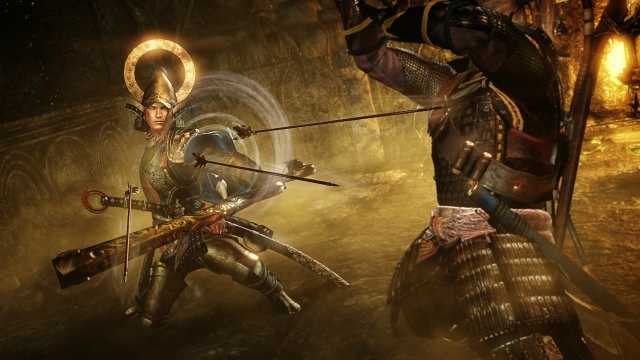 You can guard attacks with all weapons and you can also perform a different type of dodge depending on the stance chosen. High stance offers a roll and the other two have a quick sidestep. By completing certain tutorial missions, you unlock ninja skills and magic skills. Ninja skills offer the ability to throw shurikens and perform other ninja abilities such as a stealth attack. Magic skills allow you to use elemental magic for projectiles and to empower your weapons with elements. The ki gauge is the stamina gauge in Nioh and this is used up whenever you dash, attack, dodge, get hit or guard attacks. Ki recharges when not in use and if you use up all your ki, your character will have to stand still and catch his breath for a few seconds, allowing the enemy to get in a free attack. You can also perform a ki pulse move with the press of the R1 button that will instantly recharge some of your ki after an attack - it's similar to DMC4's exceed system with rev and instant revs. If you perform a ki pulse at just the right time, you can recover even more stamina and also get rid of any ki dampening puddles that yokia enemies put down.

Much like the way Dark Souls uses souls to level up a player, Nioh allows you level up with Amrita collected by defeating enemies. Stop at a shrine to save your game and level up your stats with Amrita. Leveling up stats will offer you skill points in certain weapon categories or other categories. You must stop at a shrine to equip different skills. Skills can be unlocked through the menus during normal gameplay. You can also change your guardian spirit at a shrine. As you progress through the game, you'll earn different guardian spirits to equip. Once the guardian spirit gauge in the top-left portion of the screen fills, you can tap two buttons to enter a sort of powered-up mode where you have much greater ki energy that allows you perform more attacks in a row - this can be used on bosses to completely go ham on them for a certain amount of time.

All enemies and bosses in the game have a ki gauge displayed along with their life gauges while fighting them. You can allow enemies to use up all of their ki and get stunned so you can perform attacks against them or you can wait until they are nearly out of ki then attack them so that they get stunned from a guard break as you deplete their remaining ki. The ki gauge really changes up boss fights and gives the advantage to the player. One unique part about Nioh is that you feel the enemies (including bosses) and player feel equal since both you and your enemies have life and ki gauges. You never feel like a boss has infinite stamina like some bosses in Dark Souls games. 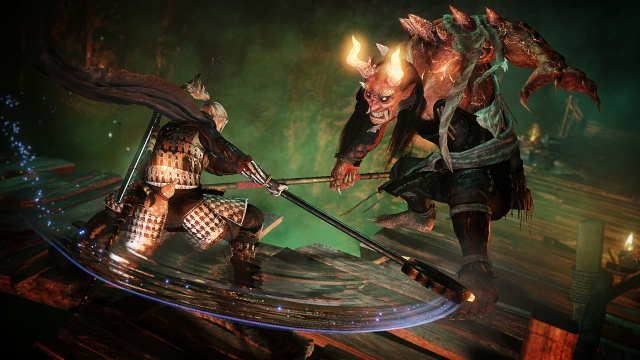 Nioh looks absolutely beautiful and runs really smooth. Some of the environments that you'll go through on missions have some great environmental effects such as rainfall and there is one stage where you go through a battefield where soldiers are fighting. Enemy designs are mainly made up of yokia (demons) and other human-like enemies. Nioh seems to repeat enemies a bit too much as the game progresses. The game really needs a few more normal enemy designs since I got tired of fighting the usual yokia with sword, cyclops and a few other overused enemies per mission. The bosses are all unique at the end of each mission and they provide a good challenge but they all have weaknesses that can be exploited. Even though I respect Nioh approach for using Japanese historical figures in its story, the overall story does get boring. I started to feel as if I would enjoy the game more if I started skipping the cutscene since they became too lengthy and just plain boring.

Much like Dark Souls, Nioh is an overall hard game. I did eventually get used to the difficulty of the game however that's not to say that it ever got easy. Nioh has a LOT of content to offer with its numerous missions and unlockable sub-missions. The game offers a good bit of exploration in stages such as secret areas with treasures and collectible frog spirits that can be lead back to shrines. You'll constantly be unlocking shortcuts as you progress through a stage much like a Dark Souls game. All enemies return once you save at a shrine much like a Dark Souls game as well. The game borrows highly from Dark Souls, but you can really feel the Team Ninja presence when it comes to the combat since it feels a lot like a ground-based Ninja Gaiden overall. If you're a fan of Dark Souls, Ninja Gaiden, or difficult action games in general, it's worth giving Nioh a try. It's definitely one of the better action game exclusives on the PS4 console.

The Good:
+ Fantastic combat system with a lot of attack variety
+ Tons of exploration and things to do
+ Tons of loot and the ability to change up the look of your armor/weapons
+ Overall addicting game

The Bad:
- The story is very average and gets boring
- Environmental objects sometimes block the camera (only a slight problem)
- Normal enemies start to repeat too much as you progress

Final Rating: 87% - Nioh has a lot to offer with its deep combat system, and it's an overall addicting action game for fans of Ninja Gaiden and Dark Souls.