When I was playing Assassin's Creed: Black Flag right around this time last year, I couldn't believe how much I was enjoying the game. I still had issues with the believability of the "memories in DNA" Abstergo Corporation nonsense, but I put my blinders to that aspect of the game and it was indeed a pirate's life for me. One of the best things about Black Flag, I thought, was that it didn't feel much like an Assassin's Creed game; it was an open world pirate adventure first, and an Assassin's Creed sequel second. It's been a year or so and now we have Assassin's Creed Rogue on PS3 and Xbox 360, whereas the PS4 and Xbox One got the larger profile release in Assassin's Creed Unity. As I watched Rogue's credits roll, I realized that unlike Black Flag, this game never really pulled me into its world. Even with a different protagonist and take on the Assassin's Creed formula, this game felt like the so-so sequel I expected Black Flag to be before it blew me out of the water. Assassin's Creed obsessives will want Rogue to flesh out some of the standing mythology, but casual series fans may want to save their cash.

Rogue promises two things right off the bat - it fills in the holes in the Assassin's Creed III American saga and it allows you to side with the Templars, the Assassin's sworn enemies across generations, for the first time. The first promise is nebulous at best. The story, following newcomer Shay Patrick Cormack, happens before Assassin's Creed III and references characters you met in that game, most notably Haytham Kenway, a Templar and father to Assassin's Creed III star, Connor. I played AC3 back when it first came out and hadn't thought much about it since, so I needed some Wikihelp in figuring out how Rogue's characters connected to those I'd already met. I suppose if I were a volume of knowledge on the series and its timeline, these allusions would have meant more, but as it was I was a passive participant in the references, often wondering if characters were new or simply reintroductions of people I was assumed to already be familiar with. Thankfully, the story is easy enough to follow on its own so even if you aren't getting the references, you a still getting a decent plot to work through. 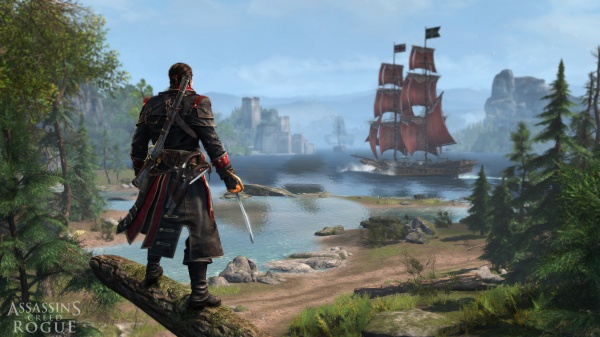 Playing as the enemy, the Templars, is set up well but doesn't end up being as exciting as it should have been. Shay starts the game as an assassin but switches sides after a deadly and traumatic event. The issue is that even though you are a Templar and the usual roles are reversed, the gameplay is identical to playing as an assassin. You still use fancy walkin' to travel colonial New York City's rooftops and buildings, you still use Eagle Vision to roll out the map and find extra objectives and you still have an obscene amount of collectables to hunt down and pick up. In a pleasant carryover from Black Flag, you also can build your ship and its crew for some naval action, though it isn't as focused here as it was in that game. Since the basic gameplay is the same, you would think the story would emphasize the Templar angle, but it never paints you as the evil character we've all been taught he must be. Moral ambiguity makes playing as the bad guy less exciting, and the identical gameplay doesn't let the title set itself apart from the rest of the series.

Ugh... there is, as always, an Abstergo story tying this all together, but it is as abbreviated here (thankfully) as I've seen it yet. It plays up the conspiracy angle again, reversing course from the lighter tone of Black Flag, and it is as unbelievable and absurd as ever. I really wish the series would drop the Abstergo nonsense but until it does, I can just ignore it and try to forget as I write my reviews. The short answer is that the Abstergo segments are unbearable, as they have been since the franchise's debut.

Being that Rogue is probably the last AC game the 360/PS3 generation will see, they definitely went out with a bang on the visual side of things. New York City and the surrounding beaches and wilderness are a sight to behold, and look better than any AC game I've seen played (note I've not yet played Unity on the current gen systems). The characters look and sound great and the environment does have a very "alive" feel thanks to lots of NPCs and plenty going on. There are some weird clipping issues and load times seem longer than they maybe should have been, but Rogue is a new high from a presentation standpoint. As a side note, the game doesn't suffer from any game-breaking bugs that I could find, which has been a huge complaint with Unity.

The one aspect that felt oddly clunky and out of place was the hand-to-hand combat. It has been a year since I played an AC game so maybe 2014 has been especially good for fisticuffs and spoiled me, but the fighting here feels slow and too deliberate. Everything seems the same as past games on the surface, but there isn't a free flow to the fighting that I feel was present before. You pretty much have to play by the AI's rules, waiting for highly telegraphed attacks to come in before parrying and counterattacking, and this just looks weird. Standing in a mob of pissed off enemies and just... standing there, sword drawn, makes the combat feel reactionary and less than exciting. I'll have to go back and play some Black Flag to see if Rogue dropped the ball or my tastes have changed, but I suspect the combat wasn't the focus this time. 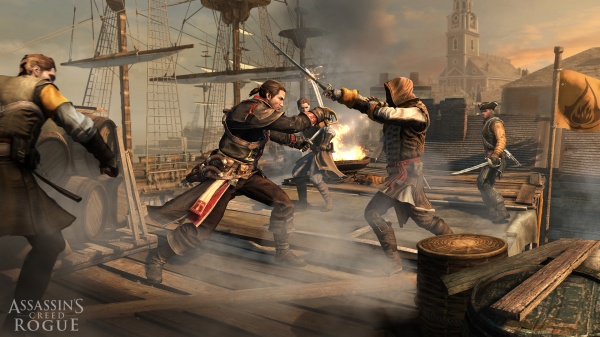 Rogue probably won't win any new AC fans and even existing fans may want to wait on this game. It doesn't deliver on the exciting promise of playing as the enemy and the story it fills in felt almost totally foreign in the intervening two years since AC3. It's as nice to see the naval battles carry over as it is annoying to see more from Abstergo, and for whatever reason the combat doesn't do it for me like it once did. Still, the game is solid and offers the player plenty to do if they can overlook some of the pacing flaws and same old, same old gameplay. But hey, at least all the NPCs keep their faces on, which is something Unity can't really brag about (Have you seen those screenshots? They. Are. Horrifying.). If you don't have a "next gen" system and need another AC adventure, Rogue will fit the bill. It just doesn't impress the way Black Flag did.

Final Rating: 68%. Being a Templar is not nearly as interesting as being a pirate.