It seems like ages ago, but I reviewed the first Assassin's Creed game when it came out on Xbox 360. I remember really liking the game, but the "memories stored in DNA" metaplot that Ubisoft expected us to swallow was easily the most outrageous and flat-out stupid idea I'd seen in any video game up to that point. Well, skip forward a handful of years, more than a handful of Assassin's Creed games and spin-offs and a whole new console generation and Ubisoft is still sticking with the Abstergo Corporation and the dumbest plot idea since St. Elsewhere was just an autistic kid's snowglobe. Luckily, the parts of the game that aren't dealing with that nonsense have evolved over time and this Assassin's Creed is not just the best in the series, it is also one of the most fully-featured and fun open world games I've ever played.

Because I clearly value your intelligence more than Ubisoft does, this will be the first and last time I mention the Abstergo bits in this review. This time around, you play as an employee who wants to take the extracted memories and make them into a video game or interactive movie on the side... you know what? It is too stupid to go on. Let's jump to Edward Kenway, the game's real main character, and pretend that other stuff isn't there. Edward is probably the most likable and real protagonist the series ever had (yes, including Ezio), and the game does a great job of getting you invested in his story. In wanting to make a better life for himself and his lady friend, Edward decides to travel to the Caribbean and seek his fortune. That's right - you start the game as neither a pirate nor an assassin, making Kenway feel more like a character you can connect with. It is only after he bests an assassin and assumes his role in quest for fame and fortune does Edward become both an assassin and a pirate, and the journey is instantly an easier emotional investment than just assuming the role of some guy in a white hood. I liked what Ubisoft did with Conner in Assassin's Creed III, but Edward is frankly just a more likable and sympathetic hero. Apparently Edward is Conner's grandfather or something along those lines, but that kind of talk steers us back toward Abstergo and we can't have that. Just know this is the best storyline and best protagonist the Assassin's Creed series has seen yet and leave it at that. 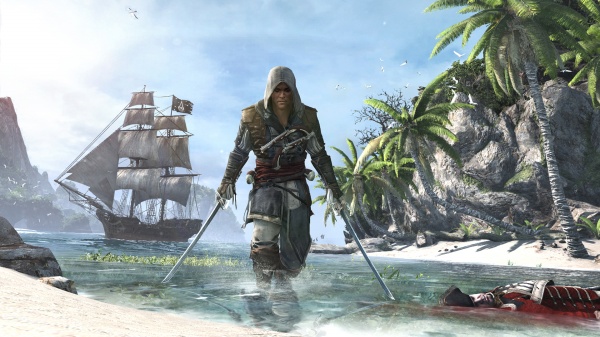 Giving us a great story and character gives the drive to get through the game, but even without either of those things Assassin's Creed IV is one I wouldn't have been able to put down. This feels like a game that was made especially for my tastes - a huge open world to explore, with TONS to do on every island and in every town and a fun and competent way of getting from locale to locale. Edward's pirate ship, the Jackdaw, isn't just a means of conveyance; it is a full-featured pirate sim masquerading as transportation. Sure, you take the ship all over the Caribbean during your adventure, but you've also got to keep it in good shape. You'll have to buy all kinds of upgrades and enhancements to stay competitive as you get further into the game, and you'll also have the job of hiring and managing the ship's crew. And no pirate ship worth its salt isn't going to shy away from some serious naval ship-to-ship battles, and these are surprisingly easy to deal with and fun. You are able to start battles with other ships if you choose, or simply respond to aggression by others with your ships cannons. It is appropriately tough to get those perfect shots lined up when dealing with two (or more) moving ships, waves and even weather, and it perfectly replicates that slow intensity of ship-to-ship battles you've seen in movies and on TV for years. You can even board a weakened opponent's ship and make off with their treasure! There is even a GTA-style notoriety scale, so if you plunder and fight too often, you'll have to deal with warships and bounty hunters in increased numbers. I can't put it any other way - I loved everything about the seafaring in Assassin's Creed IV, and it is the kind of thing I could see myself returning to, even years down the road, for a few hours of pure fun.

If sea combat was all there was to do in Assassin's Creed IV, I could have easily given the game a B or B+. Of course, the seafaring is only 20-30 percent of the total game; most of it is spent on foot, exploring the many islands in the Caribbean. As Edward, you'll sail from port to port, exploring towns, churches and uninhabited islands, finding buried treasure and taking on side missions in a world that seems real and never-ending. Playing through the main assassin and pirate missions can almost seem like an afterthought with so much to explore and do. It is funny to think back to the first Assassin's Creed and compare it to this one. The first game had three modestly-sized cities and a few activities (pickpocketing, races, etc.) to be done outside the main storyline. Black Flag has a map that dwarfs the original, 60-80 hours of content, and you never really feel like you are doing the same thing twice. This is the kind of game that people get lost in, obsessively searching out new areas and secrets for days and days on end, and like the sea combat, I loved every single second of it. 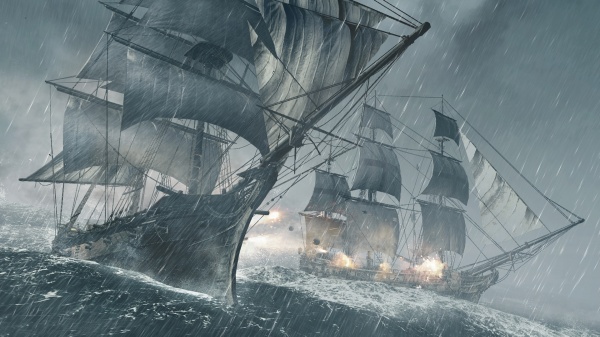 The last thing I wanted to mention was the game's on-foot movement and combat. Both these systems have been fine tuned over the years and feel as close to perfection now as they will probably ever get. Running and jumping across rooftops and through cities is as effortless as ever, and even the areas with more natural landscapes feel easier to navigate than they did in Assassin's Creed III. Even though Edward starts the game as just a normal guy, he moves and jumps with the best of any of the assassins, and being in control of him is effortless and awesome. The combat feels more refined here than it did in previous games as well. It relies on a reaction system that feels like a healthy mix of past Assassin's Creed games and the Batman: Arkham titles. Like in III, you have access to firearms, but being that the game takes place in the 1700's, don't expect to mow down enemies from afar. You'll sneak in one good shot - if you are lucky - per fight, and I found that swords were almost always the better way to battle. The guns are there if you want them, just don't expect to get too terribly much out of them.

If you can't tell, I absolutely loved Assassin's Creed IV: Black Flag. It has a great main character, a compelling story, fantastic combat on land and on sea, a huge open world with tons to do and see - it really feels like the perfect open world action game, and is certainly the best pirate video game ever created (sorry, Sid Meier). If only Ubisoft would have dropped the "how dumb do you think gamers are" Abstergo/DNA metastory and quit insulting our intelligence, this could have been my top game for the 2013 holiday season. Unfortunately, because Ubisoft continues to punish us with that nonsense, the top honor stays with Super Mario 3D World. Either way, Black Flag should be (almost) at the top of your list for games to play before the year ends.

Final Rating: 95%. Drop the Abstergo nonsense and you have a just about perfect open-world pirate game.