Skylanders SWAP Force is the third iteration in the game series that turns real-world toy figures into in-game characters, but there's more to this game than a whole new set of figures to buy. The first thing that's new will be obvious the first time that you fire up the game. SWAP Force is built on a new graphics engine, so it's the first Skylanders game on the PS3 that actually looks like a PS3 game and not a Wii port. The difference is impressive - the colors are significantly brighter, the game world is more alive with motion, and the Skylanders (and their enemies) look sharper and move more smoothly than ever before. The Skylanders world has always been a very imaginative one, and now it finally has the look that it deserves.

The next thing you'll find, and this is the bad news side of the good news/bad news coin, is that the portals (the stand which is used to make the toy figures appear in the game) from the previous Skylanders games don't work with SWAP Force. This means that even those who have been playing Skylanders from the beginning are going to have to buy a starter set with a new portal. Also disappointing is the fact that the new portal is wired, although this is not at all obvious from the product packaging. However, the portal itself looks a bit better than the original as now the changing colors that react to the Skylanders placed on the portal pulse from its sides now as well as the top surface. The new portal still supports two figures at once, so Skylanders SWAP Force can be played cooperatively by two players (or competitively in the game's Battle Arena).

When you pop your first Skylanders SWAP Force figures out of the box you may find yourself gripped by a sudden panic when one of the figures breaks in two. Don't worry; this is what it's supposed to do. Each SWAP Force Skylander has a top and a bottom piece that are held together by a pair of small magnets. Here's where the "SWAP" in "SWAP Force" comes into play - the top half and bottom half of each SWAP Force character are completely interchangeable (don't worry, the starter set comes with two SWAP Force figures, giving you a reasonable starting set of four possible combinations). The tops and bottoms fit nicely together and the magnets are strong enough to make a good seal between the halves, so you can move them on and off the portal easily without the figures falling apart on you. 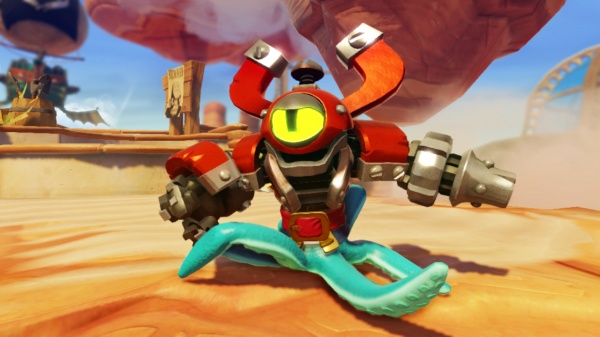 As in previous Skylanders games, the more you play with a particular figure the more experience it earns. As it levels-up you'll gain access to new attacks and powers for the figure, allowing you to customize the figure to your liking and make it more your own - and since these customizations are stored on the figure itself, you can take your figures to a friend's house and have them appear in their game exactly as they do in yours. The SWAP Force figures take this all step further by providing a different set of upgrades for both the top and bottom halves, and each half will keep its unique upgrades as they are swapped with those of different figures. The two attack buttons each Skylander gets are divided between the top and bottom halves with a SWAP Force figure, so swapping parts also creates new combinations of attack powers. And while each Skylander figure has its own generally clever name you're free to change their names yourself. With SWAP Force figures you can name both the bottom and top halves, leading to some potentially funny combined names when you're swapping them around.

The introduction of the SWAP Force characters adds another dimension to the game that may cause some chagrin for the person responsible for financing the Skylander figure purchases in the household. The first Skylanders game featured bonus areas in the levels that were locked behind gates that required a Skylander aligned with the same element to open. Skylanders Giants added gates and chests that could only be opened with Giants figures. SWAP Force includes both of these types of restricted areas, plus two more for good measure. There are now gates that are restricted to a combination of two elements, requiring a SWAP Force figure with a top and bottom half combination representing both elements. In addition, there are challenge zones tied to the type of bottom half of a SWAP Force figure. For example, a zone may require a "climbing" bottom half while the next requires a "teleporting" one (and as of this writing, there are some areas that can only be unlocked by SWAP Force figures that haven't even been released yet). In short, if you want to unlock all of the game's content and get 100% completion, it's going to take you more figures to do so than it did in prior games. If you already have figures from the two previous games you're already part of the way there, but you're still going to need to pick up several SWAP Force figures regardless. Also, if a Skylander gets knocked out during a level it's out for the count - run out of figures and you need to start over. Having a larger stable of figures gives you more leeway in grinding out a level. To be fair, you can make your way through all of the levels and complete the game's storyline with the figures included in the starter set, but just be aware of the fact that you'll either be tempted to buy more figures or will be facing impassioned pleas to do so.

Even if you never make your way into all of the locked zones you'll find plenty to explore in the latest Skylanders game. The new jump ability that has (finally) been granted to the Skylanders not only adds platform challenges to the game that were completely absent in the prior two games, but also allows players to look around a bit for hidden spots and treasures. Skylanders SWAP Force is by no means an open world game, but at least you now have the opportunity to stray from the path a bit and to be rewarded for doing so. 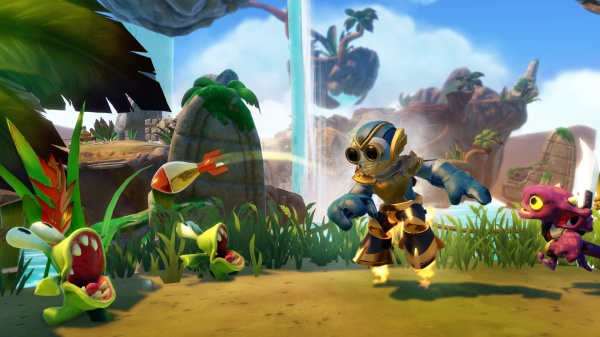 The game has an extensive menagerie of enemies with a variety of attack styles, and it often will mix up the attacks with different combinations of foes. This not only adds variety to the game, it forces you to adjust your tactics for each situation or to make the decision to swap in a different Skylander more suited to the battle at hand. A game like this could have easily just gone down the button-mashing route, but thankfully Skylanders SWAP Force never feels like a button-masher. Older players will appreciate the game's multiple difficulty levels that let you ratchet up the challenge, while younger ones will appreciate the fact that you can lower the difficulty level at will so that a particularly challenging encounter doesn't put an end to any further progress in the game.

If you like the battles, you can have fun testing your Skylanders in combat outside of the storyline in the Battle Arena. The Survival modes pit you against waves of enemies and can be played solo, cooperatively, or competitively. Ring Out mode lets you just go against each other. You can have some fun with these modes - once you unlock them, that is. Unfortunately, you'll have to put a few hours into the game before you can even play these modes.

From a presentation perspective the game is fantastic. There's a lot of variety in the game's levels and each special zone is themed to the element required to unlock the gate - a zone for fire Skylanders may feature volcanoes and pools of lava. Zones that require a mix of SWAP Force elements combine the themes, so an undead/water zone will have you slogging through a flooded graveyard. The voice acting is well done, and even though the dialog is definitely geared towards a younger audience the actors turn in a performance worthy of an animated feature.

As for the game's downsides, the biggest one is the obvious budget related one. To see everything the game has to offer you're going to have to put up two to three times the money you invested in the starter set. And those who have been playing Skylanders since the beginning are still going to have to buy a starter set to play SWAP Force. Game-wise, I wish it was easier to tell when the game has auto-saved your progress. The levels are long, which is great, but there were times when I kept playing less because I had the time or desire to and more because I was worried that if I quit I would lose a chunk of progress. Lastly, I would have been nice if the game was freer with its camera. Sometimes the camera angle can make it hard to see an enemy or to notice a side path. These last few complaints weren't enough to sour my experience with the game, though, and it can easily be recommended based on the gameplay. The budget question is another matter, though, and I leave that one up to you.

Final Rating: 90%. Skylanders keeps getting better, and your budget for figures has to keep getting bigger.