Have you felt that today's "stealth" games, or even games that have limited stealth sequences, are a little lacking? I loved the new Tomb Raider as much as the next guy, but sneaking around was, in a word, lame. Shadows made no difference in whether or not an enemy ended up spotting you. Huh? The Last Of Us did things a little more smoothly, but the lack of a true non-lethal option, which would have made zero sense in the game, left stealth fans wanting. Even the great Splinter Cell series seemed to give up on stealth with the last entry, Conviction, a game that all but forgot about sneaking and taking enemies out without a sound. Stealth fans rejoice at the news; the new Splinter Cell, Blacklist, reinvigorates what made the series great and provides the best game of hide-and-kill I've seen in quite some time.

The story this time around isn't quite as involved or, as some would say, stifling, as it was in Conviction. Sam Fisher is back in the good graces of the United States and running a new spy program called the 4th Echelon. Sam and his team report directly to the President and have a "Blacklist" (Ah! He said it!) of terrorist leaders and organizations to take down. The looser plot fits nicely with the mission structure of the game and gives a gentler push forward than the too-story driven Conviction, and it works well. In-between mission sequences allow Sam to wander the 4th Echelon flying fortress, and talking to various team members not only fleshes out the story in little ways, it serves as the game's menu and stat tracking systems. It's a brilliant way to deliver both plot and needed info, and makes the player feel in control of how much or how little of the game's extra info they really want. The best thing about Blacklist's story, though, is that it once again FEELS like a Splinter Cell game, not just a third-person shooter starring Sam Fisher. 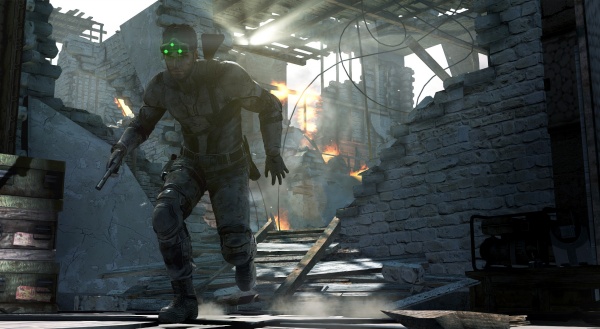 Blacklist, in going back to the series' stealth roots, also plays like the Splinter Cell you grew to love, and all the little ins and outs of true stealth gameplay make this one feel like the next gen has arrived a little early. In making your way through as either a lethal or non-lethal stealth killer - your choice, and feel free to mix it up and throw in a dash or run-and-gun if you like - your options seem limited only by your imagination. Sneak up onto a building's roof, silently stunning guards or tossing them from balconies as you go. Well-placed, silenced headshots work just as nicely. Or simply kick in the front door with guns and grenades blazing. Any approach you choose will get you through the game, and it smartly grades you at each mission's end based on your approach. Meeting certain goals also earns you money with which to customize Sam's gear between missions, meaning the game not only lets you play as you wish, it also makes available all the tools you'll need to enjoy the game, no matter which play style you choose. It means that Blacklist can be any kind of game you want it to be, free of consequence. If anything encourages multiple campaign playthroughs, it is this kind of setup; I'm on my third, by the way.

If Blacklist does have one fault, it's the visuals. The voice acting and music is up to the series' high standards, but the graphics can be downright ugly in some areas. Sam himself always looks amazing, but the others in 4th Echelon and the enemies are all a few years behind visually. It is most noticeable in the 4th Echelon base when talking to other NPCs, where every face looks blocky and poorly animated. It isn't quite as bad when in the missions themselves, but enemy A tends to look and move exactly as enemy Z, and neither is all that great. There was some noticeable slowdown during a few frantic encounters, and screen tearing is an ever present issue. Its always a bit strange to complain about this stuff, especially in a game with some outstanding environments and Sam himself, but its there and it needs to be addressed. I've read that the Wii U version looks significantly better than the PS3 and 360 versions, so maybe that is the way to go if you have Nintendo's system in your living room.

Don't get me wrong, though; Blacklist is a great game and probably my favorite Splinter Cell title to date. The reinvigoration of the stealth element feels familiar and fresh simultaneously, and the option to play as you wish without any story or bonus consequences is a big draw. The graphics aren't the best I've seen, but if you agree that stealth hasn't had the best showing in 2013, then Blacklist is right up your alley.

Final Rating: 87%. The stealth genre gets some much needed reinvigoration.