When I covered the WWE '13 hands-on preview earlier this month, I hadn't been paying much attention to the wrestling world around me. In fact I think the last time I had seen any sort of wrestling before that was on accident during the summer Olympics. Before that it was somewhere in the neighborhood of 15-20 years ago when WWE used to come on after Saturday morning cartoons and I'd get sucked in for a few minutes before heading back outside to play. Needless to say my knowledge of the sport's history had some gaps and I was a bit overwhelmed by the amount of catching up I had to do.

Luckily for me and my outdated wrestling knowledge, the WWE developers decided to take everyone on a trip down memory lane this year and relive one of the more memorable eras in franchise history, which happens to line up nicely with the last time I had a working knowledge of the sport. Attitude Era, as it's come to be known, was not only one of more popular times but also the name of this year's headlining campaign mode where you'll play through a number of historic matches as one of eight WWE superstars from the past. While this mode is a lot of fun, most of the experience would be lost without the new WWE Live collections that bring in authentic visuals like star entrances, ring breaks, barricade crashes, as well as some revamped audio assets that I'll discuss a little later. WWE Universe makes a return visit with some pretty hefty expansions to its lineup. Marketing will tell you things like it has 200 new story lines, new cutscenes, complete control over schedules, events, matches, etc., as well as in-depth statistics for pretty much anything you could hope to track. What I will tell you is that they're not lying, and unless you're a fan who's been asking for this level of detail, it can get a little overwhelming if you try to toy with everything at your disposal.

WWE '13 introduces the 2nd generation of the Predator control system, which I've read is a decent improvement over their previous attempt, and to a certain extend I can agree with those claims. Targeting for your everyday punches and more involved rope slams does appear to work as intended, however I was never able to quite nail down the reversal maneuvers in a consistent manner no matter how many times I tried. I guess it could be an indication of how character response times change over time as they get beaten up, but comparing that to everything else left me scratching my head as to what I was doing wrong. Outside of that little timing quirk, I was pretty happy with the controls, and I definitely underestimated the complexity that hides beneath the forward facing simplicity. 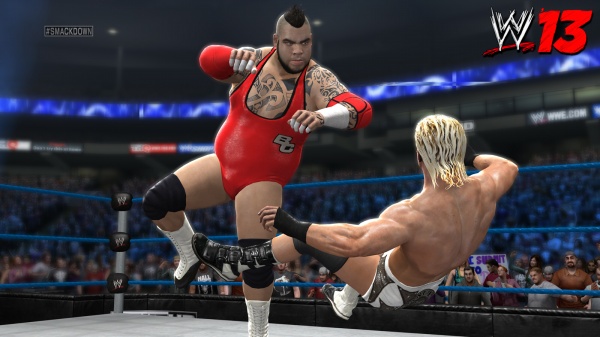 There's no doubt that a majority of this game's graphics are some of the most beautiful you will find in a fighting game today. I have to admit that I'm impressed every time I watch an entrance animation or get a close up of sweat dripping off a wrestler in the middle of a match. The likenesses of both the (oily, big muscled with veins popping out) Superstars and the arenas they battle in (with fully rendered crowds) are clearly something the developers set out to make a statement with. It's not without a few setbacks though; a lot of the video content taken from actual WWE events could use a little bit more love in the touchup department, and a fair amount of the accessory type items (championship belts, outfits, etc) I came across were otherwise bland compared to the amount of detail you get in other areas of the game. These are arguably small blemishes to an otherwise gorgeous looking package, but still confusing when you consider that they appeared in the headlining game modes of this year's release.

Moving on to an area where I couldn't really find any type of flaw, the new WWE Live elements included in this year's installment brings with it a ton of audio content that sounds really, really good. Because of the relationship that THQ has with the WWE, they are able to pull audio directly from the archives and stitch them into the game in various ways. The audience you hear getting dynamically louder and softer as a match progresses was very likely pulled and mixed from a live event, giving it a neat sense of realism. The developers were also able to bring in a decent amount of voice talent for the game, and as we learned at our hands-on preview event, the talent they couldn't get to sit down in an audio booth was also pulled and touched up from these archived recordings, and I honestly can't tell you which method was used for each. Rounding out the category is a refreshed musical track list and a bevy of heavy hitting effects to bring you even closer to the action.

With so much content packed into the single player experience it's easy to recommend WWE '13 to the fans. The online modes didn't see a ton of change, but still offer up enough variations to keep me happy, and while I was bummed I didn't have the ability to play in someone else's created WWE Universe, the ability to share creations from one library to another should still keep you and your friends busy for a long time. My last count of unlockable content was up in the neighborhood of 100 items, and I don't believe that's counting the three planned DLC packs over the next few months. The roster is a staggering 105 wrestlers, the extras and customizations are everywhere, and gameplay mechanics are relatively solid. Diehards of the series will love it, and anyone else who's been looking for a little nostalgia won't be disappointed either.

Final Rating: 88%. WWE delivers a fresh set of upgrades, an impressive campaign mode, and doubles down on shareable customizations.