Yeah, Ok, I know that Rainbow Moon, the PS3 exclusive tactical RPG, has been out for a little while now, and yet here is the review at the top of the recent articles list. What took me so long? I could sit here, blaming Tony Hawk Pro Skater HD, Kingdom Hearts: Dream Drop Distance and Darksiders II for monopolizing my gaming time as of late, but that is only half the story. Rainbow Moon itself shares some of the blame. See, this extremely old-school fantasy is as plodding and grind-heavy as RPGs come, with not just a somewhat shallow story unfolding at the speed grass tends to grow, but nearly every last aspect of the game matching that near-comatose pace. But guess what? I've enjoyed it, and I'm still playing even as the three previously mentioned timesinks have found their way to the shelf.

If you are looking for flash, Rainbow Moon is not the game for you. The isometric view of each battlefield is pretty standard in games like these, but previous SRPGs like Tactics Ogre: Let Us Cling Together and Final Fantasy Tactics: War of the Lions (both PSP games) have done a whole lot more visually with a whole lot less processing power. The in-game visuals, though usually bright and colorful, look doable on the original Nintendo DS and rarely impress. The (few) cutscenes don't fare much better, and neither do the limited animations and often boring battle effects. Nothing is ever downright ugly, mind you, but it's tough to imagine that you're playing this game on the same system that is home to graphical powerhouses such as Uncharted, Killzone and Metal Gear. 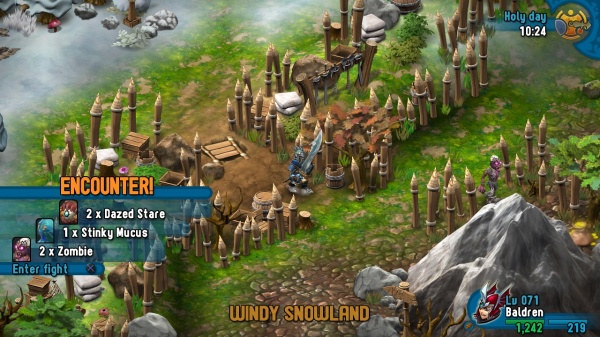 The undisputed king of the grind-heavy SRPG world is the Disgaea series from Nippon Ichi. Playing any one of those titles can result in hundreds upon hundreds of hours of lost living, and Rainbow Moon is no different. The problem is that the Disgaea series keeps players pushing forward with fun characters, a solid story and witty dialogue. Not so with Rainbow Moon. Not only is the story impossibly dull, you'll have to put in dozens of hours to see the slightest progression. Things start off with Baldren, the main character, being banished to some other planet with a bunch of monsters. His rival, Namoris, is at fault, so things come down to seeking him out awhile also taking care of the beasties. That's pretty much it. Of course there are new characters to meet and recruit, as well as boss enemies to wear down and destroy, but if you are in the market for a deeply layered plot, sorry; I've pretty much told you everything you need to know.

If you are the right type of gamer, though, none of that really matters. The main reason Rainbow Moon will garner somewhat of a following is the gameplay. There is a TON of stuff to do and accomplish throughout the adventure, and the plodding pace means that you'll need to seriously commit if you have any hopes of seeing Baldren's story through. As much as the grind will appeal to that certain type of gamer, there quickly arise two major annoyances that will further limit the game's supporters.

The first is that nearly every single thing you do is a fetch quest. Go here, get this, bring it back for a reward. Even grind-adoring players will come to the painful realization that Baldren and crew are little more than errand boys/girls and that no one is capable of doing anything for themselves. What makes this worse is how slowly things progress in-game; it isn't uncommon to put hours into a single quest. And when that quest's only goal is to find someone's suitcase so they'll join up with you, it is nearly impossible to feel as though your time was well spent. Yes, you'll have more experience and levels at the end, but that simply doesn't feel like enough to justify the commitment. And the forced resource management mechanics (characters must be fed, watered constantly) make the process not only time-consuming, but expensive as well. 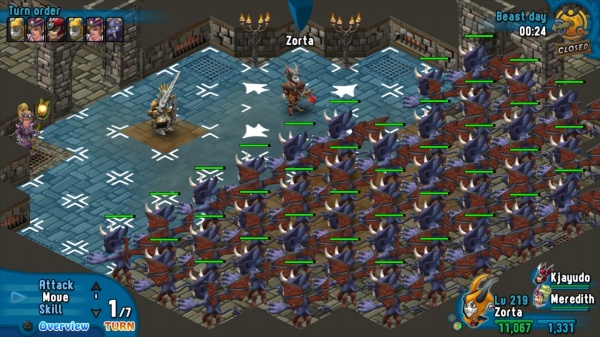 The other complaint, which matters to some a great deal and others not at all, is that Rainbow Moon supports in-app purchases. I mentioned that resource management comes into play at almost every turn, and every single item, action, perk, everything costs in-game Rainbow Coins. Even equipping items can come at a hefty price; you'll need to buy the ability to use the item before having to turn around and purchase the item itself. Huh? Every last thing in the game is available without resorting to using your real world cash for experience/Rainbow Coins/items, etc., but it is going to take you A LOT longer than someone who has more disposable income than you do. With the PSN Store purchases taunting you, Rainbow Moon can either be played where every penny counts and resource management becomes even more frustrating, or with a full bank account in-game and an empty one in real life. It feels like an unfair choice to make us consider, especially when you take into account the time and commitment the game demands.

This review has a more negative tone than I would have liked. As I said before, I generally enjoyed (and continue to enjoy) my time with Rainbow Moon. That doesn't mean, however, that this game is one for everybody. With no real story to speak of, not to mention the pace and the in-app purchases, I imagine that even the small number of folks who would generally enjoy this type of adventure will have some issues with the overall title. I'd like to see a sequel clean up some of the missteps and remove the resource management stuff, but so few will make it to the end of this one that I'm not sure a sequel would be necessary, or even wanted.

Final Rating: 68%. Yes, Rainbow Moon is a flawed SRPG, but I know that a number a serious genre fans will absolutely fall in love.