If you want your games to, well, make sense, then you should probably stay as far away from Datura as possible. The game begins with you in the back of an ambulance, ripping the EKG wires from your chest before moments later transporting you to an empty forest. This forest serves as the game's hub of sorts, a home to a small spattering of puzzles and interactive objects that trigger further surreal interludes like the one that opens the game. None of these scenes really seem to connect with one another, leaving it to the player to decide what, if anything, it all means. The game is described by Sony as "taking inspiration from the world of film narrative", but it's more like a short student art film than anything else, which doesn't work very well for a game. I'm all for nontraditional storytelling, but this all came across to me as being strange for the sake of being strange rather than as something insightful or brilliant.

The game's designed for Move controls, but just trying to get through the game with a Move is a surreal experience. The game wants so badly to use the Move to immerse you in the experience, but the controls work so poorly that the effect is just the opposite. Trying to get the disembodied hand that is used to manipulate objects in the game to do the simplest of tasks is difficult and simple interactions such as turning a door handle become exercises in frustration. You can control the game using a regular controller which makes things somewhat less frustrating from a control standpoint, but nothing kills immersion more than the need to constantly think about the controls and their failure to respond. 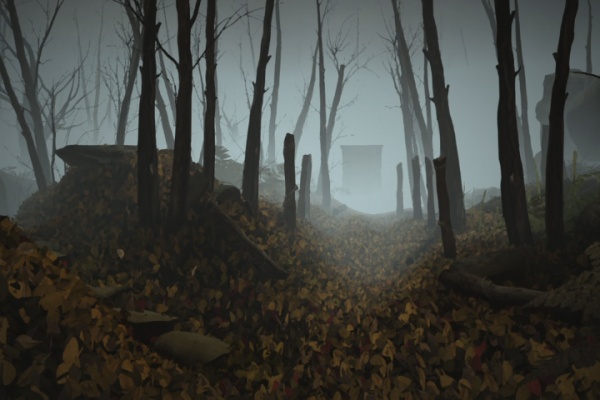 You'll spend most of the game lost in these woods.

Calling the game a puzzle game would be a stretch, as there's nothing here that's really a puzzle. The interactions are all just that, interactions; interactions that are all pretty straightforward, some of which trigger transitions to surreal interludes and others which don't do much of anything at all. For example, you may see an air rifle and some moving targets. What should you do? Not much of a puzzle, is it?

The whole experience - I hesitate to call it a game - will take you a little over an hour depending on how long you spend goofing around with the controls. I can appreciate games that try to create a different and unique experience, but the real trick is to make that experience enjoyable, and Datura fails in this important regard.

Final Rating: 55%. Datura demonstrates that the surreal can be just as frustrating as the real world.