A good part of this review will be familiar to those of you experienced with the first Skylanders game because, frankly, there's not much that's different in the game series' second iteration. Once again the game's core features are the Skylanders action figures and the Portal of Power that brings them to life in the game. If you already have a Portal of Power from the first game it will continue to work with Skylanders Giants, although the new Portal of Power uses a USB cable for power rather than batteries so depending on how quickly you eat through batteries it may pay for you in the long run to "upgrade" to a new Portal. As for your original Skylanders figures, they are also compatible with Skylanders Giants, and will retain their experience, gold, upgrades, and hats when used in Giants. The converse is not true, though, as the new series of figures will not work in the original game, and any hats your original Skylanders pick up in Giants will not be available when they return to the original game. However, any of your figures from the original game that reached the level cap will be able to start earning experience again in Giants, as the original level cap of ten has been raised to fifteen.

Now that we've got all of those cross-compatibility questions out of the way, let's take a look at the game itself. In the Skylanders series' fiction, the figures are powerful beings from Skylands who have been sent to Earth in a frozen state. Using the Portal of Power, the Portal Master (i.e. the player) can transport the Skylanders back to their world where they come to life and defend it against the evil Portal Master, Kaos. This time around, Kaos has managed to get his hands on an ancient Arkeyan Conquertron, which is basically a giant robot, and it's up to the Skylanders to stop him before he uses it to conquer all of Skylands.

Skylanders Giants' story mode plays as a series of distinct levels, with time between the levels spent on Captain Flynn's flying ship which serves as the game's central hub. The gameplay is essentially like an action-RPG in which you spend most of your time dispatching hordes of enemies, breaking objects looking for loot, and solving simple puzzles that occasionally impede your progress through a level. Place a Skylander figure on the portal and that Skylander appears in the game, and each one has a unique set of light and heavy attacks. While these attacks can vary between ranged, melee, and special skills, for the most part you can do just fine sticking to whichever Skylanders are your personal favorites. While a Skylander is active, it earns experience from the enemies you dispatch with it. As it levels-up from this experience new attacks become available which can be purchased with the gold collected by that Skylander. The game stores experience, gold, and any upgrades directly on a chip in each figure, so only the active Skylander earns experience and collects gold. 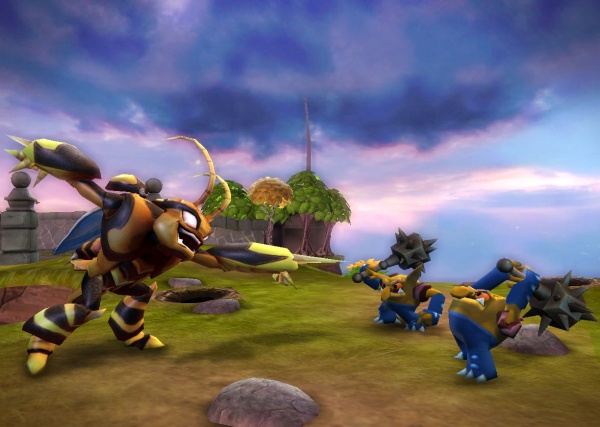 While you can finish the game with only the Skylanders that come with the starter kit, the game has ways of encouraging you to buy more figures. The figures are divided into eight elemental categories and there are areas of each level in which Skylanders of a designated element receive stats and experience boosts. While any Skylander can still be used in these areas, other areas are protected by gates that can only be opened by a Skylander of a certain element. When you complete a level you're given a rating on it up to three stars, and the only way to receive a three-star rating is to find all of the collectible objects in a level. If you can't get to certain areas, then you can't get 100% completion for a level. If you happen to break down and get a new figure or two after you've already made your way through several levels in the game, you can go back and replay any of the levels that you've already completed. Not only will this let you get to areas that were previously unavailable, it will give you a chance to level-up your new Skylanders.

Having a number of Skylanders on hand also makes it easier to complete a level. When a Skylander runs out of hit points it must "sleep" for the remainder of the level, but you can carry on with another figure. Once you run out of Skylanders, you have to restart the level from the beginning. And if you lose a Skylander of a certain element that you need to open a gate later in the level, you'll be faced with a restart anyway if you want to get a 100% completion for the level. Since the game's difficulty level is geared towards younger players, running out of Skylanders on a level will really only be a problem for kids with small figure collections.

Lastly, the game has a number of in-game achievements, a good number of which are tied to the number of figures you use with the game such as those awarded for playing three different Skylanders from the same element.

This is all pretty familiar territory to those who played the first Skylanders game, but there are some minor additions to the gameplay that come with Skylanders Giants. The first and foremost is the addition of the new Giants figures. These figures are about twice the size of the regular Skylanders figures, and when you place them next to those figures they do indeed look like giants. This increase in scale carries through to the screen as well. While most of the enemies in the game are roughly the same size as the Skylanders, the Giants tower over them and give you the feeling that they are significantly more powerful than your run of the mill Skylanders. The Giants also seem to fare better against larger more powerful enemies and bosses. The Giants' size also allows them to perform actions like lifting and tossing giant boulders, pushing down monoliths to make steps or bridges, bashing through walls, and pounding holes in the ground to open secret passageways. The Giants' bulk does make them lumber, though, so they're noticeably slower than the normal Skylanders. 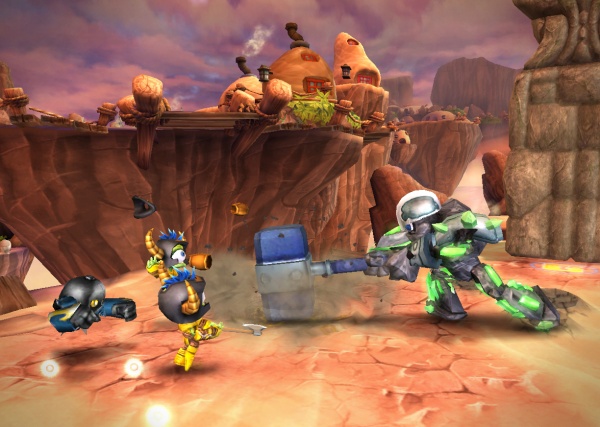 The new Giants figures make up eight (one for each element) of the forty-eight new figures available with the release of Skylanders Giants. Twenty-seven of the figures are re-issues of figures available with the original game, and although the figures feature the Skylanders in new poses, they are identical to the originals in-game. So of the new figures include "lightcore" features that cause parts of the figures to glow when placed on the portal, and frankly they look pretty cool while aglow which can make them hard to resist. The Giants figures also sport some glowing features.

Another new addition to the game is Skystones, a collectible card game played within Skylanders Giants - don't worry, all of the cards are obtained within the game and there's no need to buy anything. The game is a simple strategy game with the goal of capturing the majority of the squares on a three-by-three grid. The computer-controlled players you'll face in games of Skystones are programmed to give eight year olds a chance to win, so if you're older than that you're likely to find yourself a Skystones phenom.

The game's story mode can be played cooperatively by two players with a single portal, or those players can play competitively in the game's Battle Mode. Battle Mode provides a number of arenas in which players can battle their Skylanders against each other, making use of all of the attacks they've unlocked as well as special power-ups scattered around the arena. On the downside, there's no online play in the game so you can only compete against someone in the same room as you. However, since all of a Skylander's stats and attacks are stored with the figure, you can easily take your favorite champion to a friend's house and compete with them on their home turf. The figures are system-independent as well, so if you level up your Skylanders on a PS3 you can still use them if your friend has a Wii or Xbox 360. Battle Mode is probably where multi-gamer households will spend most of their time, since battling friends and relatives has an added degree of fun that can't be matched by replaying game levels over again to try and three star everything.

Like its predecessor, Skylander Giants' graphics have the look of a multi-platform game designed for its lowest common denominator system. This means that even on the PS3 it looks like you're playing a Wii game. This probably won't phase your average eight year old, but it would be nice to see high definition renderings of the Skylanders figures on screen and to see the Skylands world rendered with greater detail to really bring it to life.

Overall, the game does just enough to provide mildly addicting gameplay to back up its primary hook of bringing action figures to life within a video game. It's great fun for kids, as long as you can keep their figure lust in check or have several hundred dollars of disposable income available to spend on action figures. The game also holds a certain appeal to adult gamers who still hold a fondness for action figures or who feel gypped that this sort of thing wasn't available to them when they were kids. As a game reviewer, I'm more attuned to the game's shortcomings than your average eight year old, but even for me the game provided a lighthearted distraction that provided a change of pace between game sessions with Black Ops 2 and Far Cry 3. Add ten points to the final score below if you're a kid or just think action figures are awesome and subtract twenty if you're a cynic who thinks the whole thing is nothing more than a scam to sell more toys to kids.

Final Rating: 78%. It's more of the same Skylanders gameplay, which is probably just fine with Skylanders obsessed pre-teens.