Ni no Kuni: Wrath of the White Witch Review

What is the mark of a truly great video game? For me, it has always been the feeling of wishing I never played a particular game, just so I could experience it again for the first time. Few titles ever come close to stirring that feeling in me, so when those emotions start to well up I know a game is truly something special. Ni no Kuni: Wrath of the White Witch on PS3 is that kind of special. And while my goal in reviewing games, good and bad, is usually to let the reader objectively know what they need to before making a purchase, that doesn't apply here. Instead, my goal with this review is to convince you that, come hell or high water, you need to play this game. It really is that good.

Author's Note: I will be doing my absolute best to remain as spoiler-free as possible in this review. Ni no Kuni's story is so rich and magical that I'd hate to ruin it for anyone.

Ni no Kuni tells the story of Oliver, a likeable boy from the America-in-the-1950's-esque town of Motorville. After an accident uproots Oliver's entire world, he, through some magical circumstances, meets Drippy, a fairy with a Welsh accent and a possible way to set things right. The pair travel to a world that is best described as a mirror to our own, where Motorville's residents' "soul mates" populate a fantastic alternate reality. Oliver and Drippy's quest takes them to the furthest reaches of both worlds and pits the pair and their friends against a seriously evil presence that threatens everything and everyone they hold dear.

Ok, I know that is an extremely vague setup, but as I said earlier I don't want to ruin a single second of Ni no Kuni for anyone who may read this review. You'll have to take my word for it but this game tells one of the best stories I've seen an RPG tell in quite some time. It hits all the notes a good RPG story should, ranging from rip-your-heart-out sad to genuinely funny to stupid grin heartwarming. Perhaps most importantly, Oliver, Drippy and the rest feel like real people with real emotions and motivations, and you will miss them, like you would an old friend or family member, when the game is over.

Ni no Kuni's engrossing and brilliant story is made all the more enthralling by the game's presentation. Studio Ghibli, the Japanese animation studio behind films like Princess Mononoke, My Neighbor Totoro and Spirited Away, co-developed the game with Level 5, the people behind the Professor Layton games and the criminally underappreciated PSP SRPG Jeanne D'Arc, and both companies influence and style is evident even at first glance. The in-game graphics mirror that of any Studio Ghibli production down to the last pixel, and the hand-drawn, animated cutscenes that pop up every so often drive the Ghibli influence even further. From the excellent voice acting to the bright, colorful world, this is one of the most aesthetically pleasing PS3 games of all time. 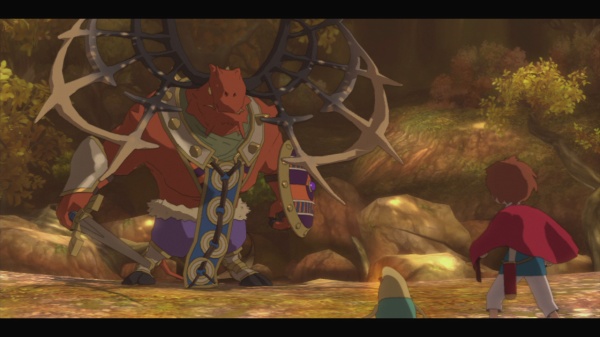 Level 5's fingerprints are more evident when it comes to the gameplay. These folks have crafted solid, even stunning RPGs for years, and Ni no Kuni is without a doubt their best effort yet. Ni no Kuni is best described as a mash-up of a traditional JRPG and a monster fight/collect/trade title like Pokemon. As Oliver, Drippy and crew make their way through this massive adventure, they'll be doing a lot of stuff you've seen done in just about every JRPG up to this point. They wander an extensive world map with towns and dungeons to explore. They fight a string of never ending battles all in the name of gaining levels and the new stuff that comes with them. Party management, equipable items, better and better weapons and armor, you know, the Final Fantasy school of game design. Even though we've all done this stuff countless times in the past, the light-hearted nature of things makes it feels fresh again. I'll also note that there are (thank god) no random battles in Ni no Kuni. All enemies are visible either in dungeons or the world map, and the outdated, annoying practice of random encounters gets another nail in its long-overdue coffin. Yay!

The Pokemon-esque monster battling works remarkably well within the JRPG framework here. Each character can command familiars in battle, much like trainers command Pokemon. These familiars can be equipped with weapons and armor, leveled up, evolved, captured, released, taught new moves, etc., and with nearly 350 total, the collection aspect of things threatens to take over the minds of the Pokemaniacs out there. Luckily, it isn't forced, so people who just want to play through without catching 'em all can do so with no obvious consequences. My only beef with this sophisticated imagining of the monster battling system is that familiars, when evolved, drop back to level 1, making them instantly useless later in the game. Sure, they level up quickly according the well-balanced experience point dispersion, but evolving a useful familiar takes them out of the game for a good few hours as they gain strength. It is annoying, but considering how much Ni no Kuni gets right, it is easy to overlook as too serious a flaw. 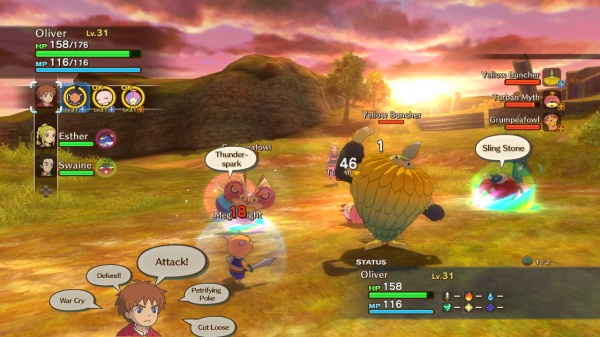 I feel like I could talk your ear off for days about why you need Ni no Kuni in your collection. I didn't touch on stuff like the intelligent and rewarding side quest and bounty systems or the amazing localization, but none of it really matters from a review standpoint. All of Ni no Kuni's positives, whether covered by reviews or not, only add value to what is already and amazing and timeless product.

Final Rating: 95%. Ni no Kuni gets so much right, and is an amazing and timeless game.