I'm not the world's biggest soccer fan; in fact I can barely be tricked into sitting down to watch an event as exciting as the World Cup without a considerable amount of booze involved. And I feel bad about that sometimes, because soccer players are tremendous athletes who probably deserve a little more respect than I can usually muster. What I am a fan of though, is a game that bridges a sport I would otherwise consider boring with over the top arcade style play and that's exactly where FIFA Street comes in.

While clicking around the developer blog, I was surprised to learn that this edition is meant to be a reboot of sorts for the franchise, so even though you'll see certain elements from the earlier versions, EA has gone through some pains to distance itself from some of the older generations. And it doesn't take more than a few minutes into the game to see that their work is paying off. Lots of the cartoon-ish looking animation styles and other really over the top aspects have made way for cleaner interfaces, smoother controls, and definitely much more realistic looking visuals. The new World Tour mode seems to be a well thought out addition and Street Ball Control (similar to any of EA's other skill stick features) will keep you busy trying to find different ways to maneuver around opponents for days.

Controls for FIFA Street are a treat 95% of the time. Everything from player movement to activating Street Ball Control and the fun that ensues has a really nice flow. The only issue I still have is when I actually want to shoot the ball, where aim seems to fly out the window. And even though I'm pretty sure a lot of my observation is user error (caused by shooting at a net in the NHL series where things are simply handled differently), I can't help but wonder if something is slightly off. During my testing it seemed much easier to shoot off the walls as part of a larger trick than it was to actually hit the net, and it got to a point where I would only try to score if I was practically standing in the goal. Everything else though is so fluid that I often struggled with caring about sinking another shot, because as long as I got to embarrass the dummy trying to defend against me (or even myself if I flubbed something) I was still having a good time.

Anyone who has played a game from the regular FIFA series will understand how far along the engine has evolved over the past generation of consoles, and since FIFA Street was built on that same code base it wasn't surprising to find some pretty stunning visuals throughout. EA has gone on record saying that streetball as a sport is already over the top as it is, so there's no real need to make it feel even crazier with arcade-style graphics, and based on the final product I have to agree that it looks incredibly better while still retaining a fair amount of that arcade feel. Mix in the internationally charged soundtrack, decent spectator feedback, and all the authentic soccer sounds you can handle, and you've got a nice little feast for the senses. 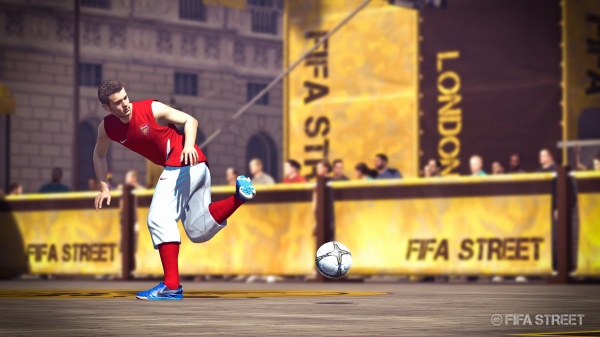 So yeah, FIFA Street has a few little things here and there that it could improve on. It's missing a tutorial section that would probably keep some from giving up early because of how deep the skill set goes, and a combination of the camera angles and shot system take some getting used to. But overall it's a really fun game with a diverse set of modes and unlockables that will keep you busy for many, many hours (and that's before you go online!). World Tour mode and Street Ball Control are by far the crowning achievements, but the game also has quite a few sleeper features like being able to customize a match in Hit the Streets mode to play just about any way you can imagine or the ability to play as one of your favorite stars from some of the world's top international clubs. When I originally sat down to hash this review out, I thought I would have some fun, but it turns out that I was ill-prepared for what EA had in store for me and now I'm going to have a hard time getting the disc out to make way for other games.

Final Rating: 92%. FIFA Street runs on to the court after four years with a shiny new look and enough moves to make your head spin.