Gamers, as a whole, are getting older. Those of us who remember trying to figure out the point of Haunted House or E.T. on the Atari 2600 are well into their third decade on this planet, and with that comes some of life's changes. More and more of us are becoming (or trying to become) spouses and/or parents and if recent games are to be believed, most will probably prefer a son over a daughter. Before you freak out and label me a misogynist, let me explain. Take the abysmal PS Vita game Resistance: Burning Skies for example. Firefighter Tom Riley spent the entirety of his bland adventure unemotionally searching for his wife and daughter. Now, a few weeks later, Inversion, the new gravity bending shooter from Namco, puts players in similar circumstances. In blasting away at the game's enemies, the main narrative focus is finding the main character's, you guessed it, daughter. When viewed in this light, it seems that producing female offspring will guarantee you the chance to be a protagonist in a lame, boring shooter. That isn't a future I'm willing to sign up for. Though not out-and-out bad, Inversion wastes a cool gravity mechanic by inserting it into a wholly underwhelming cover-based shooter while also unintentionally discouraging, by adding fuel to the fire, the gaming population from producing children of the fairer sex. Don't tell my wife, OK?

Players take on the role of Davis Russel, a stereotypical young cop with, again, a wife and daughter. After some doings transpire, Davis ends up in the middle of a conflict with an otherworldly race of conquerers known as the Lutadore. No, not like the Mexican wrestlers; these heavyset guys look like they stepped off the set of Gears of War before finding themselves in this game. The hook is that the Lutadore come packing some new tech, vests that can manipulate Earth's gravity. If you ever played Q-Zar at a birthday party, you already know what the vests look like. Anyhow, Davis and his equally stereotypical partner are captured by the enemy and, guess what, manage to escape with some vests of their own. The game doesn't really pick up until after this point; the first hour is forced cutscenes and tutorial. And it's boring. Really boring. Dead Head Fred on the PSP taught me never to judge a game by its first level, but unfortunately, things in Inversion don't really ever rise to any semblance of excitement. The only benefit of moving further into the game is the cutscenes become less frequent, something you'll definitely want after your first 60 minutes.

Inversion looks and sounds like an unfinished game. First off, the voice acting is out-and-out bad, and with so much of it peppered into the adventure, it becomes glaringly obvious as a major flaw. Davis' partner and the Lutadore are the worst (and often most unintentionally hilarious) of the bunch, though Davis himself is no prize either. Any emotional impact the story may have had is annihilated by silly voice-over, and the graphics don't help much. The game simply looks like it needed more time in the oven. Pop-in is terrible, textures glitch and flash in and out and the character models run the gamut from blah to ugh. The cutscenes aren't much better, often looking like they jumped right out of a late PS2 game. 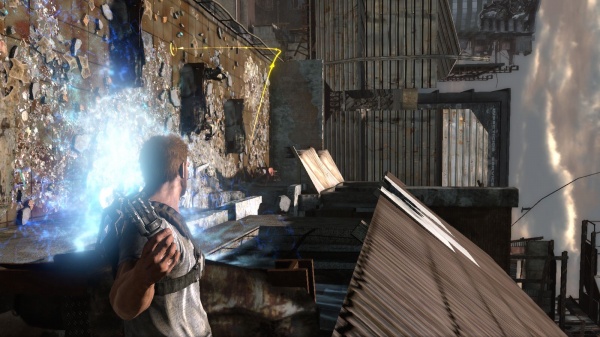 Darksiders proved that borrowing liberally from other games isn't always a bad thing, but only if it is done right. Inversion does it wrong. The game plays like a 50/50 mix of Gears of War and Psi-Ops, a great, though mostly forgotten, PS2 game. The cover-based shooting is taken right from Marcus Fenix's playbook, though something was obviously lost in translation. You'll often run into enemy encounters without any cover at all, and anyone who played Gears like a run-and-gun game knows how much more difficult the lack of cover makes things. This gets worse in boss fights. Many of them offer no cover, and since you'll be facing the same bosses over and over, the annoyance is not only present, Inversion rubs your face in it many, many times.

The gravity mechanic is where the Psi-Ops comparison comes in. You can pull enemies toward you, blast them or even bring structures down on top of them. The main difference between the two is that Psi-Ops was a pretty good game. The gravity stuff does work, mind you, it just never feels necessary in completing goals. The scripted parts of the adventure will of course use (underuse?) it, but in the larger firefights it will be the furthest thing from your mind. By the time you finish the last boss you will have only really used the gravity stuff a (good-sized) handful of times, making the mechanic feel like a tacked-on way to set the game apart from all the other shooters on the market. It could have been if it was fun to use or required to progress, but it really isn't.

As negative as all this sounds, Inversion isn't terrible. Its main obstacle is how many other games on the market handle this stuff much, much better. The gravity manipulation feels like an afterthought, and the bad voice acting and graphics pull the score down even further. And if your wife, daughter, girlfriend or even you are pregnant, steer clear of this; you'll be painting the nursery blue in hoping to avoid being trapped in a meh game like this or worse, Resistance: Burning Skies.

Final Rating: 40%. Inversion isn't terrible - its main obstacle is how many other games on the market handle this stuff much, much better.