It is 3:30 in the freaking morning. On a weeknight. I know damn well that my alarm will go off in just a few short hours, demanding I get up, get showered and get to work. I know that if I don't crawl into bed soon, I'm going to be a wreck tomorrow; with symptoms of exhaustion that will no doubt look like the flu or a serious hangover to my coworkers. And I just do. not. care. What has me hypnotized in front of my TV in a way that I haven't been in years? Developer Arkane Studios' new first-person stealth action masterpiece Dishonored is the party at fault. Seriously, if you have ever enjoyed any kind of video game from any genre on any platform, you need to experience (not play, experience) this amazing new title. Right now. I can only hope you have a sick day or two coming; you will need the time.

Dishonored starts off with Corvo Attano, a soldier/bodyguard returning to his native Dunwall a victor in some faraway battle. He is reunited with Dunwall's Empress Kaldwin and her daughter, Emily, but it isn't long before everything goes to hell. The Empress is murdered, her daughter kidnapped and Corvo is framed for the whole mess. The game really begins with Corvo's escape from prison, mere hours before his scheduled execution, and his forming an allegiance with the Empire Loyalists, a group seeking the still-missing Emily as rightful heir to the throne. What follows is a series of missions that see Corvo working his way up through the ranks of the usurpers, killing or otherwise dismissing them on his way to the top. Dishonored's plot isn't anywhere near as fresh and original as the gameplay it serves as a framework for, nor does it contain a single twist or unexpected development but plenty of NPC interaction and tons of lore keep things interesting until the final frames. 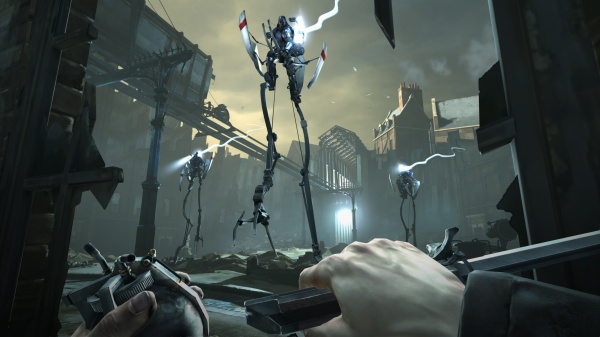 Choice. Every game these days claim to have it and few, if any, offer much beyond Scantron-style A, B or C decisions. Dishonored is the first game I've played in a while - maybe ever - in which I felt like I truly had control over my character, the environment and the ultimate outcome. The first-person perspective aids in the feeling of immersion in the city of Dunwall, but I'll get to that in a moment. First, let's talk objectives and outcomes. Each of the game's main missions drops Corvo into a segment of Dunwall with a singular goal - find this person, rescue so and so, etc. How you get to those ultimate tasks is where the brilliance in game design shines through.

To avoid major spoilers, I'll just talk about the first mission. Corvo must get rid of a government official, an Overseer. The option to charge right in, all guns, crossbows and swords, is certainly there, and it will most definitely work and serve to accomplish the goal. You can also go the stealth route, using short ranged teleports and sticking to the high ground to avoid being seen by a single enemy. Or, like I figure most players will, use a combination of both tactics. On top of the main goal and the options to achieving it, you are free to tackle other objectives at will, and decisions made directly affect subsequent missions. Will you help crazy old lady Granny Rags poison a gangs' elixir supply? Will you ignore her? Or kill her outright? If you poison the well, you won't have an unending elixir supply if you choose to take up with the gang in another mission, but they might continue to harass Granny Rags, they may even kill her. I, personally, didn't have the heart to kill her, even just to see how doing so would change the plot from that point. Each and every mission is overflowing with these little variations, and following them to fruition is just as exciting the first time as it is the final.

Sure, other titles offer this kind of "yes," "no" or "sorta" judgment calls, but Dishonored takes things a step further. You choice to kill or render unconscious the game's enemies has a major impact on the story as well. Kill everyone in your path and there will be more plague rats and "weepers (i.e. zombies)" in future missions, as well as a darker ending to the overall game. Going for the knock-outs over kills reduces the rat and weeper problems and promises a cheerier ending, but you'll often have to stick to the shadows to make this work. And as if that isn't cool enough, each of the game's main objectives offers a nonlethal option to those willing to work for it. Stabbing the first mission's Overseer gets the job done, but branding him a heretic and seeing him excommunicated is, to me anyway, far more satisfying. With each mission offering so much choice, Dishonored is a game you can play over and over and see things a bit differently each and every time.

Remember me mentioning the first-person view? Though it makes Corvo's adventure much more deeply personal to the player, it also gives rise to the one and only complaint I've got to level against Dishonored. Like the Metroid Prime series or BioShock, Dishonored's perspective is essential to the game and shouldn't be confused with first-person shooters like Call of Duty or Halo. But unlike Metroid and BioShock, the jumping in Corvo's adventure just isn't what it should have been. It can be tough to leap seemingly small distances, vertical or horizontal. Even the purchase of a double-jump ability does almost nothing to fix this, making hopping from platform to platform an exercise in mashing the jump button and hoping Corvo will scale the ledge. Abilities like Blink (that short range teleport I mentioned) help a little, but even with that in full effect jumping can be a smidgen too touchy. We all know by now, thanks to Metroid, that first-person games' jumping can be handled with skill so Dishonored's fumbling of this ball is pretty disappointing. 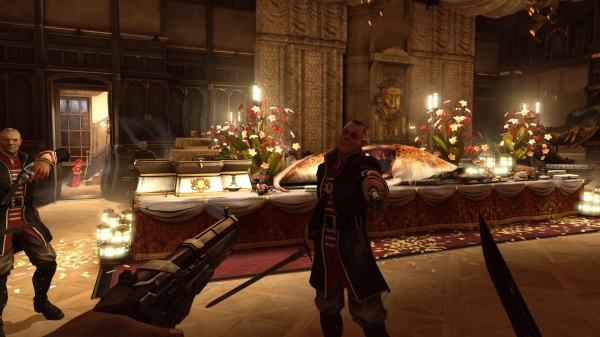 The last thing I will mention is that Dishonored features absolutely no multiplayer element at all. None. Zero. Like Vigil Games' did with Darksiders II, Arkane Studios wisely made the decision to focus on the breathtaking single player campaign, rather than waste time and resources on the pointless online deathmatch that so many can't seem to live without (to the detriment to many a game). Dishonored's choice to stick to its guns on this matter should be applauded and seeing the "one player only" mark on the packaging actually made me like the game more than I already did. Dishonored's campaign is poetry in motion and there are plenty of online shooters out there. If you're upset over the multiplayer omission, go play one of those other titles and shut up.

BioShock. Shadow of the Colossus. Journey. Braid. Okami. The "games as high art" list isn't a long one, but you can go ahead and tack Dishonored right on it. Giving the player the freedom to proceed in almost any way they can imagine, along with the substantial amount of backstory and visual mastery makes Dishonored a game for the ages, one you will likely continue to play and replay for some time to come. Corvo's adventure is, without a doubt, at the very top of the Game of the Year 2012 list and deservedly so. If you like video games, you will absolutely love Dishonored. Do not hesitate to dive in head-first.

Final Rating: 99%. If you like video games, you will absolutely love Dishonored.