Fair warning, everyone: Before I played through Scarygirl, the PSN's newest 2.5D platformer, I had not previously heard of the character. From what I understand, Scarygirl has been making the media rounds for a while now and I just somehow missed the boat on her. I guess I'm getting older. Anyway, Scarygirl has been around for a while now, so this game more or less comes with a built-in audience. But if you've lost touch with the youth, as I seem to have, then you may want to think twice before dropping the cash on this one.

Scarygirl's most striking feature is how it looks. We've all seen the 2.5D platformer thing done before, and it works just fine here. What I meant was that, depending on your taste, the style of Scarygirl will either be its greatest asset or its most show-stopping fault. Scarygirl looks, from top to bottom, like it was designed by a 19-year-old eyeliner-wearing drugstore assistant manager whose only goal in life is the endless pursuit of being alternative and collecting The Cure's concert bootlegs. Did I paint a good enough picture? I hope so. Like I said, this is a love it or hate it presentation. Unfortunately, whether or not you dig Scarygirl's aesthetics, the extremely dark color palette can often time get in the way of the game. For example, trees in the foreground can be solid black, obscuring your view of the already too dark action in the background. Even if you do love Scarygirl's design, there is no denying that stuff like shouldn't happen in well-designed, modern games. 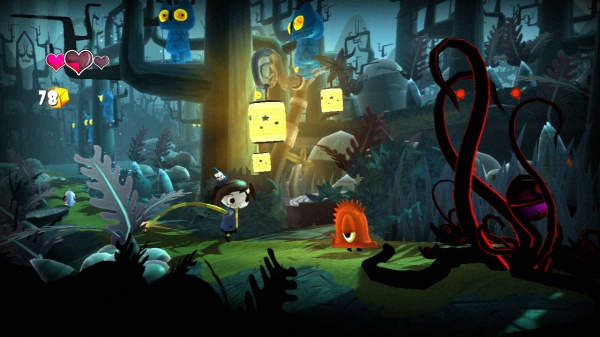 The way Scarygirl plays is a different story; this one hits the mark on all but one mechanic, a development that still has me thinking of what could have been. The game plays like any other Mario-style side-scroller; you run to the right, you punch out enemies to take them down, you get the picture. Scarygirl also has a Smash Bros. style energy shield and, more importantly, a whip-like device. With the whip, our hero can yank plants from the ground, enemies from the sky and everything in between; think Yoshi's tongue and you'll have a good idea of how Scarygirl's whip business is handled.

All this stuff works pretty well, but that brings us to the major weak point. Scarygirl expects you to be able to aim, with pinpoint accuracy, objects captured with the whip as projectiles. This can be very difficult. Controller-throwing difficult. It's a bad sign when an otherwise fun title grinds to a halt over one small issue, but its even worse when this happens in the game's tutorial. It's tough to learn the rules on a system that seems to have none, and it�s going to take a few tries to get lucky enough to pass. I won't even mention how much MORE difficult aiming becomes when enemies are attacking from all sides. I'm not sure if it�s the control scheme, the game or what, but a fix to the aiming would have gotten this game much higher marks.

If there is one last thing to say about Scarygirl, it's this: No matter how you feel about the style, the whip, anything, this game has one universal downfall. It just plain isn't very interesting. Though I did finish the game, I was bored with it right around the end of stage three. At the basest level, video games are entertainment. So when a game provides no entertainment, it becomes a chore. I wouldn't go so far as to say I'd rather clean the gutters than play this one again, but I'd have to see how dirty those gutters were first. So, in licensed game review tradition, I'll have to that Scarygirl is, wait for it, for the fans only. Cliche, yes, but tragically, all too true.

Final Rating: 45%. Perhaps 'Boringgirl' would have been a better title.