It's been awhile since we last saw the raccoon master thief Sly Cooper and his gang, but if you have any fond memories of the Sly Cooper games still bouncing around in your head after eight years it will be like he never left. Sly Cooper: Thieves in Time reunites Sly with his pals Bentley, a wheelchair-bound turtle with l33t hacking skills, and Murray, a hippo who's the gang's muscle, and sends them on a time-traveling adventure. Someone has been traveling through time and locking up Sly's master thief ancestors, preventing them from fulfilling their destinies and contributing to the family tome of thievery techniques, the Thievius Raccoonus. Luckily, Bentley is able to fabricate a time machine of his own and the gang is off to save the Cooper Clan before they're outtatime.

The story's setup makes for some fun level variety, with five game worlds to explore that take you to places like the Old West and Feudal Japan. The game stays true to the series' trademark cel-shaded, cartoon-like graphics, although they aren't as novel as they were when the series first debuted a decade ago. Exploring the worlds is enjoyable because it feels like you're inside a cartoon, and as in any classic platform game true to its form, exploration is strongly encouraged in the game. You can easily make your way through the game's story by making your way from one story trigger point to the next and sticking to the story levels, but for those who enjoy shooting for 100% completion on their games there are plenty of hidden items and treasures to uncover - and some of these will require you to revisit a world after you've picked up a new move in a subsequent world. 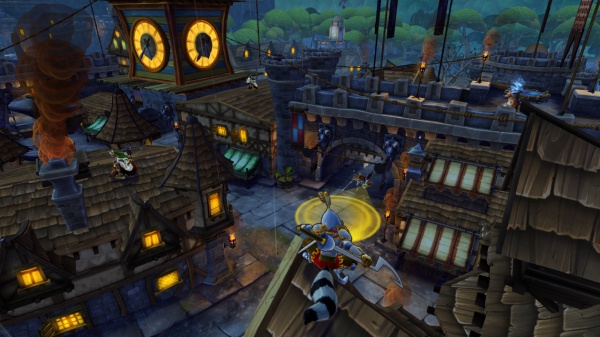 The game's levels put you inside a cartoon

The core gameplay itself is true to the original trilogy, with new developer Sanzaru Games taking an "if it ain't broke, don't fix it" approach to the game mechanics. Sly (and his relatives) is quite nimble and athletic, and you'll be using the environment to help him make it around the levels avoiding detection. Whether it's grinding along power lines or train tracks, balancing atop flagpoles, or shimmying along ledges, the game makes it pretty easy to get around. Aim for a spot glowing with blue sparks and as you're about to land hit the Circle button and you'll nail the landing every time. The game's emphasis on keeping things focused more on stealth than on mad platforming skills means that most gamers including the younger set should have no trouble making it through the game.

Taking a stealthy approach to getting around is important because as smooth as the platform and stealthy aspects of the game are, the fights are rather clunky. Whether you're playing as Sly, one of his ancestors, or Murray, it's always the same button-mashing frenzy. You can purchase new fight moves with the coins you collect from smashing everything in sight, but the more you purchase, the more things stay the same. Playing as Bentley is another matter entirely, and a rather frustrating one at that. Bentley's main attack is to toss little bombs at enemies that must be aimed with the left stick. The first issue is that the aiming arc doesn't indicate whether or not there's an obstacle in the way, so bombs will often go bouncing in some random direction when they hit an obstacle you didn't see. When you do hit your target, the bombs don't always stick to the enemies and even when they do they're not powerful enough to take out the enemy in one shot. This invariably brings that enemy charging right at you, and trying to hit a moving target with one of these bombs while moving yourself is an exercise in futility. Bentley's melee skills leave a lot to be desired, and the button mashing that serves the other characters well doesn't cut it with Bentley - getting stuck in a fight with Bentley pretty much means the turtle's toast. It got to the point where I would be disappointed to see that a Bentley mission was up next, although this was mitigated somewhat by the chance that one of his missions would be a hacking exercise. These missions play out like old-school arcade shooter games and are a fun change of pace from the platform gameplay. 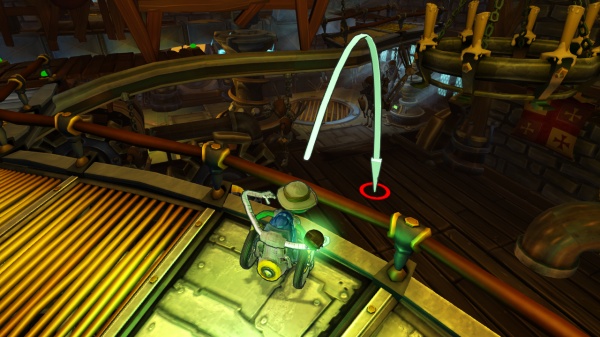 Boss fights are more enjoyable, and they're very much inspired by classic platformer boss fights. They're all multi-round affairs that are exercises in pattern recognition - you'll usually have to weather a storm of deadly, unblockable attacks before you can move in on the boss while he's catching his breath so that you can get a few licks in before the attacks begin anew. The boss battles are the game's most challenging aspect, as they should be, but nothing is unfairly difficult or anything that can't be overcome with a little persistence.

The game is pretty forgiving of failure, whether you're exploring, on a mission, or fighting a boss. Missed jumps result in a quick "flash-backward" that rewinds time to just before you made the ill-fated leap. Capture by enemies or the depletion of your health will put you back at the last checkpoint, and since the game is pretty liberal with these checkpoints you never have to replay too much of a level. 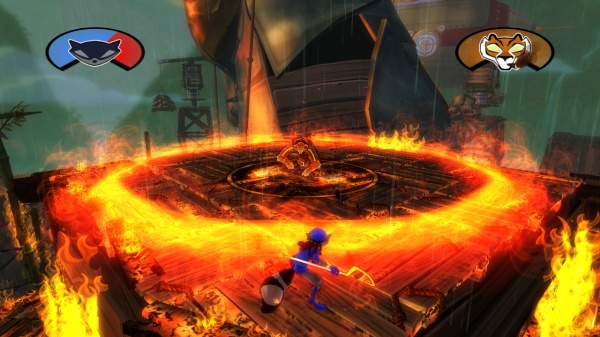 Raccoon versus Tiger, bet on the Raccoon

As if the game's low price point wasn't enough of a bonus for gamers who buy Thieves in Time, the PS3 version of the game includes a free download of the game on the Vita. The game also includes a "cross-save" feature that allows you to upload a saved game on one system to the PSN cloud and then download it on the other. Switching to the Vita after playing the game on PS3 requires a little adjustment because some of the controls are changed to compensate for the Vita's lack of buttons and addition of touch control support, and you will only get the in-game introduction to a new move's controls on the system you were playing on when you unlocked it. The Vita version's graphics are little less detailed than they are on the PS3, but overall the core experience is the same and cross-save is a great way to keep playing while you're away from your PS3. And as an added bonus, the trophies that you earn will transfer between the two systems, effectively giving you double trophies for each of your accomplishments in the game.

Playing Thieves in Time took me back to the time when the PS2 boasted a number of great platformers - games that are a lot fewer and farther between on the PS3. Whether or not you were a Sly Cooper fan back in the day, Thieves in Time's charming characters, goofy (in a good way) story, and colorful, enchanting environments will make you a Sly fan today.

Final Rating: 86%. It's been awhile since we've seen Sly Cooper, and Thieves in Time makes me wonder what took him so long.