If somehow you do not know, Call of Duty has become the biggest gaming franchise on the consoles, with a healthy number of computer gamers. Let's get it out of the way: there is nothing game-changing about Modern Warfare 3. The multiplayer is essentially the same, and the twists in the single-player are starting to lose their power. But as you know, in this current era of gaming it's more difficult to find something you've never seen before and even more difficult to find a game that doesn't have a number in the title. That being said, Modern Warfare 3 will meet the expectations of longtime fans and will do nothing to hurt its chances of gaining new fans.

The story picks up right where the previous game leaves off, and broadens the scope to fit the "World War 3" theme as you will bounce all over the world taking different points of interest for the events unfolding. If you haven't played the previous entries and Black Ops, you may be a bit taken by the �in your face� twists and turns of the story. The warning for graphic content at the start of the game returns, and there are plenty of disturbing scenes you can and will witness. The controversial level �No Russian� in MW2 was a gimmick, and the forced-shockers in this game won't surprise many. By this point it would be a surprise if the story was linear and didn't kill off half the people you interact with.

The gameplay has moved a lot closer to being a movie you can partially interact with. The amount of cinematic elements versus full player control is nowhere near 50%, but the cinematic qualities of this game don't really build atmosphere or tone; it's always rushing here and there, bombs exploding, bullets flying, people yelling at you, and you're always changing perspective. None of this makes the game worse, but none of it helps build connection to the story or characters because most players won't realize who they are playing or why they are playing that person. Make no mistake, the campaign is fun and enjoyable, but the Transformer movies didn't get better because they kept increasing the scope of the story. At this rate, one of these games will have you executing kittens on Mars during Intergalactic World War VII. 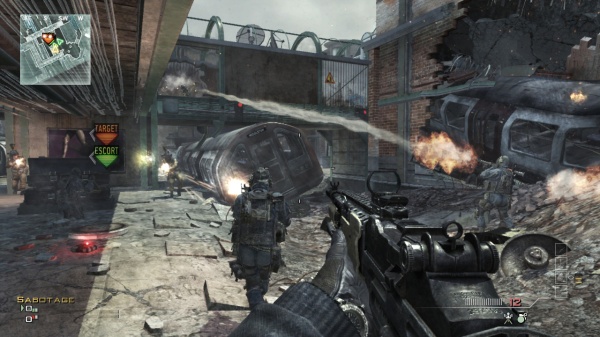 If you liked MW2's multiplayer then you will be at home because not a lot has changed. The multiplayer reflects the single-player; both are fast-paced and relentless. If you contrast it to Battlefield 3 the comparison is more like comparing an arcade racing game to a simulation racer. CoD multiplayer is characterized by players falling over and spawning on top of each other, where Battlefield gives you huge maps and too many choices of how to engage in combat. And I'm not sure if my wired connection is laggy or what but everyone seems two steps ahead of me, and I have no lag problems in other games. I will partially chalk it up to my dislike of CoD multiplayer, but those kill-cams sure don't seem to reflect what I see. I think the real crime is that once players get a kill streak they get to drop a bomb or call in a chopper on the other players. Combine that with weapons and perks that unlock over time and you have multiplayer that demands much dedication in order to be competitive. And beyond the multiplayer, there are plenty of challenges and a survival mode in the Special Ops tab, for both offline or online play.

CoD fans don't need anyone telling them whether or not to pick up this game; they already own it and it would take a complete meltdown of effort or over-saturating the market to drive them away. Everyone else just needs to know that MW3 is as good as MW2, which is to say both games are great and very much alike. The worst sign of the times is that you can get increase XP if you use the Mountain Dew codes. That's all well and good, but CoD has come too far from its roots of being a solid WWII shooter and is on a path to become the Madden of first person shooters (if it isn't already). The bottom line is no one can complain about the campaign, but the multiplayer is far from a thing of perfection. If only they could combine Battlefield 3's multiplayer with MW3's single-player, then you would have a perfect shooter.

Final Rating: 86%. It's all too familiar to MW2, and the multiplayer hasn't really changed either.