Transformers: Dark of the Moon Review

Since I started writing for gamerstemple.com about six years ago, I’ve taken on the role of the Transformers go-to guy. If a movie, DVD or game starring the robots in disguise came out during that time period, you can bet I was the one to review it. This didn’t always fare to well, as Transformers games that are actually good are few and far between. Last year’s Transformers: War for Cybertron (PS3, 360) easily earned the title of best Transformers game ever, and the people behind it have now been tasked with creating the movie tie-in game for the third Transformers film, Dark Side of the Moon. There is no way this could go wrong, right? Could a movie tie-in game, for once, not suck? 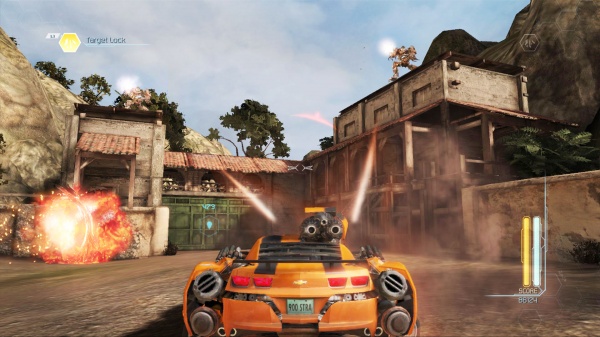 If you played War for Cybertron, Dark Side of the Moon will feel instantly familiar. The third-person shooting and ability to switch between vehicle and robot mode seems untouched in the translation to the movie tie-in, and in a lot of ways it is the same. But the game’s balance has been knocked right off kilter by some strange decisions and changes. For example, in War, you spent about an equal amount of time alternating between robot and vehicle mode. You’d speed (or fly or whatever) into battle and flip into robot mode, blasting enemies the entire time. It was, for lack of a better term, freaking awesome. In Dark Side of the Moon, the balance has been shifted and you’ll find spending most of the time in vehicle mode is the only way to survive. Why? Well, in robot mode, you have limited ammo, and what you do have must recharge after a bit of use. In a new augmented vehicle mode that has each Transformer spilling over with all kinds of flashy weaponry, you have unlimited ammo, much greater mobility and a much greater tactical advantage over both enemies and terrain. The shift makes robot mode feel almost useless, and it is not a step in the right direction. If I wanted strictly vehicle combat, I’d play Twisted Metal or the atrocious 3DS version of this very game (trust me, it’s that bad).

Another step backward was taken with Dark Side of the Moon’s level design. War for Cybertron’s packaging was virtually bursting at the seams with over the top battles and memorable set piece encounters, where Dark Side of the Moon has the Transformers charging into bland level after bland level, clearing out enemies and moving to the next area, where you can bet you’ll be doing the exact same thing. Over and over again. It’s lazy design, and War for Cybertron was indisputable proof that this team can do great things with the Robots in Disguise. That ability was obviously ignored in churning this one out. 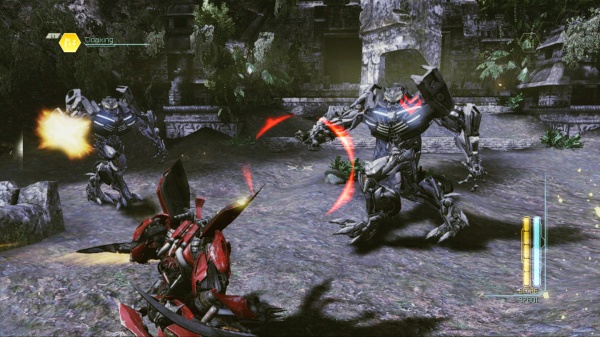 There are other problems as well, but I won’t spend too much time on them. I’d like the majority of this review to center on how a team that created an AAA title let their good name be soiled by rushing this one to market. The story is no epic quest, just another “before the movie” exercise that takes the heroes and villains to all the requisite video game locations: the desert, the ocean, lava world, pizza land… I just threw that last one in to make sure you were paying attention. The graphics, sound and controls are all serviceable and get the job done, it’s just a shame the job was so badly thought out.

Is Transformers: Dark Side of the Moon the worst Transformers game? The worst movie tie-in game? The worst game of all time? All three questions get a hearty “no” from someone who has been on the Transformers train for many more years than he’d care to remember. Dark Side of the Moon draws fire in the same way once great bands decline as they age. We all know they can be better, great even, and our hearts break as we see them spiral further and further into mediocrity. War for Cybertron was a landmark game, a Transformers title FINALLY done right. The capable hands who masterfully created that masterpiece were at work on Dark Side of the Moon, but I suspect a shorter development time, coupled with a tie to a summer film, are what ultimately sank this sophomore Transformers effort. Again, it’s not a terrible game; it is, however, one of the biggest letdowns of 2011.