The '3' in Uncharted 3: Drake's Deception could just as easily stand for the three major aspects of gameplay that work together to make it so much fun to play. The first of these is story. In many games story is used like cheap kindergarten glue as something to stick the levels together. In others it provides a certain amount of context and motivation for the gameplay. Rarely is a story so absorbing that you find yourself spending time with a game as much to find out how the story unfolds as to actually play it, but I found Uncharted 3 to be one of those games. While playing the game there were times that I found myself hoping that a new cutscene would follow an action sequence as much as I did that the gameplay would continue. Part of that is undoubtedly due to the fact that I am a sucker for Indiana Jones style movies, but most of the credit goes to the game's story writers and the developers who understand the narrative potential of games and how a compelling story can enhance the gameplay experience. As for the story, I don't want to spoil anything with a detailed plot synopsis so we'll just have to leave it at this: Drake must travel the world putting together clues left behind by Sir Francis Drake, the Knights Templar, Lawrence of Arabia, and other historical notables in an effort to determine the lost location of the fabled "Atlantis of the Sands".

The next aspect of Uncharted 3 is its puzzle based gameplay. Yes, I know that it's technically a third-person action game and a far cry from a game like Bejeweled, but it's a game that keeps your brain working as much as your reflexes during the whole experience. There are certainly plenty of puzzles in the traditional sense in the game - anyone who's watched the Indiana Jones, National Treasure, or The Da Vinci Code movies knows that relics from the past can only be located by following a series of clues and puzzles scattered all across the globe - but there is also a puzzle aspect to the game's action sequences as well. Like the games in the series before it, one of the core aspects of the game's action gameplay is Nathan Drake's (the series' protagonist) incredible talent at climbing and scaling everything from cliff sides to high rises. You'll be called upon to put this talent to use quite often, but Uncharted 3 is not an open world game in which you can scale everything that you see in any way that you want. There are predetermined paths that you can take to safely use your free-climbing skills to get past obstacles or dangers. That doesn't mean that the paths are always obvious, though, and that's where their puzzle aspect comes into play. You might find yourself scurrying up the side of a wall only to find that the path is no longer so obvious. Do you need to hop onto that high shelf next? But where would you go from there? Or maybe you can make the leap to the chandelier and try to swing it towards the opposite wall�?

The game encourages you to become a little creative in your explorations by hiding secret artifacts throughout the levels. If you see somewhere that you think you might just be able to reach, it's worth making the effort because there is probably something hidden up there. None of the puzzles, climbing or otherwise, are cheap or overly hard just for the sake of being hard, but they are just challenging enough that once you figure out the solution, and execute it successfully, you'll be left with a feeling of satisfaction at your accomplishment. 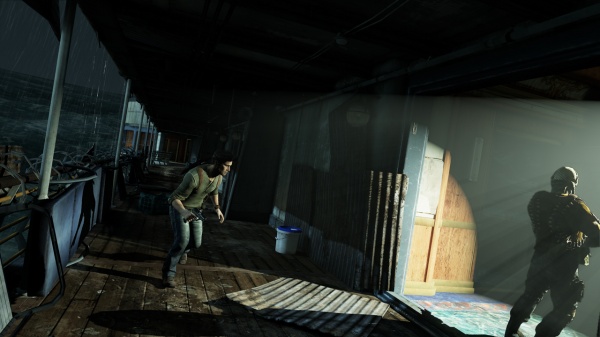 The last of the three aspects of play that work to make Uncharted 3 such an enjoyable experience is action. By "action" I don't necessarily mean the things that the term usually conjures to mind when you're talking about a game such as gun play. While there are plenty of gun battles and fistfights in the game, the action that stands out the most in mind after playing the game comes from the many imaginative and adrenaline-pumping action sequences you'll have to play through as the game progresses. The game is packed with memorable and exciting sequences such as an escape from a building being consumed by raging fire or a scramble for survival as a crippled plane falls from the sky. These sequences are exciting and enjoyable, and are the essence of what makes gaming so immersive and enjoyable.

As for the other aspect of �action', the game's gun battles are pretty enjoyable as well. The gunfights emphasize use of cover and smart tactics over a run-and-gun approach, which is certainly appropriate for a guy like Nathan Drake and prudent as well since you're usually heavily outnumbered. The game's shooter mechanics are well-implemented and there is a surprising variety of weapons available in the game. When everything clicks the gunfights are a lot of fun - using Drake's abilities to get the drop on opponents is particularly satisfying. Sometimes, though, the number of enemies made the battles feel overly long and the long odds led to some frustrating sequences that required several attempts to get past. The enemy AI is for the most part pretty good, but there are occasional boneheaded breakdowns. The enemies were certainly smarter than average as far as games go, so it was probably a matter of the glitches standing out more in this game because everything else about it is of such high quality.

I'm glad that not every fight in the game required guns to resolve. The game has a pretty good fist-fighting system that works on timing to perform strikes, counters, and dodges, both against single and multiple enemies. And the ability to use the environment as a weapon by doing things like breaking a chair over an opponent's head gives the game's brawls a classic cinematic feel to them, calling to mind some of the classic brawls from the Indiana Jones series and other classic movies. 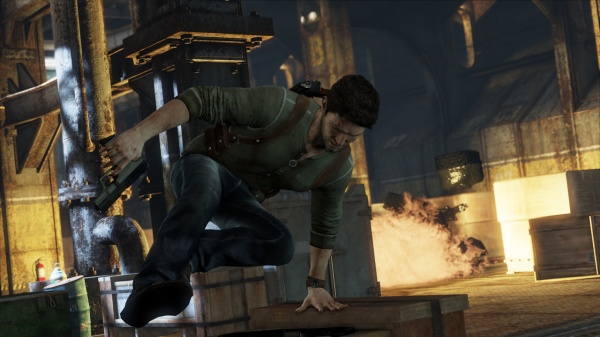 You'll get a lot of gaming mileage out of the campaign, although you'll have so much fun with it you'll wish it wasn't over so soon in spite of its length. Once it is over, if you're not the type who wants to go back and make sure that you've collected 100% of the hidden artifacts then you can try the game's multiplayer offerings. Before you jump into either the co-op or competitive online modes, though, you may want to put on some relaxing music, burn some incense, and repeat your favorite mantra a few dozen times because going online with Uncharted 3 is going to take a lot of patience. Getting into the lobby for either mode apparently requires several steps of various kinds of server synchs, and the game will often fail on one of these steps and kick you back to the menu screen. It's even worse the first time you go online because you'll have the extra steps of loading and accepting the online agreement first. Having to sit through ten or more slow failed attempts to launch the multiplayer game is pretty typical for Uncharted 3. Once you're in, you're in, but that may not be the end of your problems. In co-op mode you and your partner will often have to attempt to launch the next level several times and in competitive multiplayer you can expect regular bouts of lag and micro-disconnects that will leave you frozen and helpless long enough to be killed by another player. The multiplayer issues took some of the luster off of the game for me, and I would have been left with a better overall impression of the game if it only had a single player mode.

Once you get things going, the co-op mode is enjoyable. The co-op levels tell a different story than that in the game, but compared to the single player game the storytelling is de-emphasized and the spotlight is on the shooter action. Each level has a goal or short series of goals that are relatively simple things such as recovering an artifact or defending an NPC. While you're attempting to accomplish these goals you'll face an onslaught of enemies that will attack in waves and get progressively tougher, and will usually lead to a showdown with one or more boss enemies. The battles are challenging enough that they require good teamwork between the two players, but not so much so that they are frustrating.

Competitive multiplayer includes the deathmatch standbys as well as a couple of variants of other traditional multiplayer modes tweaked a bit to fit the Nathan Drake adventure motif.  For example, one mode has two teams competing to capture an idol and return it to a designated spot on the map to score.  The multiplayer game adds additional flair to the mode by incorporating aspects from the single player game such as scalable walls and treasure chests with bonus cash that players can use between games to improve their loadouts.  Overall the multiplayer modes are fun in their own way, but not so much so that you'll want to spend endless hours in it leveling your character - especially so since a number of those hours will come from the cumulative time that you'll waste trying to connect to a match...

Although I was disappointed in the multiplayer modes' connection issues, my overall experience with the game was a good one thanks to how intriguing and well-crafted the single player story is.  This mode alone is worth the price of admission and Uncharted 3 is a game that should be in the collection of every serious PS3 gamer.

Final Rating: 95%. Uncharted 3 delivers a compelling story and backs it with some great gameplay.