Whether you are a casual football fan or a college football fanatic, NCAA Football 2003 has got you covered.  It truly has something for everyone and not only stands at the top of its class, it easily outclasses most of its NFL competition as well.

NCAA Football 2003 does an excellent job of capturing a lot of the qualities that make college football unique.  The game is as much an homage to college football as it is a simulation.  You'll see this every time you start the game and are treated to a random clip of fans at schools across the country saying the EA Sports tagline.  Once the game is loaded, the menus are overlaid on a background which cycles through cheerleaders and mascots from random schools doing various routines.  Everywhere you turn, the game practically oozes collegiate atmosphere and enthusiasm.

The game features 144 Division 1-A and 1-AA teams, their playbooks, home stadiums, cheerleaders, cheers, and fight songs.  Many schools also have their mascots roaming the sidelines.  If you're a fan of a Division II or III school, the game includes a school creator that will allows you to add your school to the game.  You can create their uniforms, home stadiums, style of play, and select fight songs and a playbook.  You can even use the create-a-player feature to add yourself to the team.  The amount of control you have in creating your team is phenomenal.  I was able to resurrect my beloved Gauchos from their untimely death in the early 90s.  After spending a little time with the school creator, the Gauchos were able to take the field again at Harder Stadium and the resemblance of my newly created team to the real thing was uncanny and brought back many memories. 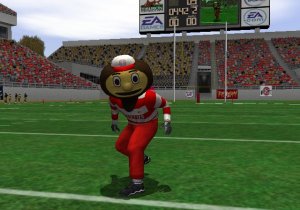 So the game does a great job of recreating the atmosphere of NCAA football, but what about the gameplay itself?  Well NCAA Football 2003 delivers some of the best football gameplay in a video game to date.  The AI is good on both sides of the ball - sensible play calling, playing to the strengths of its team, proper clock management ... you name it - gaffs by the computer are few and far between.  The AI also adjusts to your play calling.  Get blitz happy on D or fall in love with a certain play on offense, and the AI will make you pay for it.  The AI is not perfect, though.  If you're good at sports games and play with one of the better teams, you'll beat the AI more often than not.

If you're concerned that you'll be continually beaten by a superior AI, you needn't worry.  The sheer volume of teams available makes it easy to make the game as challenging as you'd like.  New to football games?  Play as Miami and fill your schedule with the Akrons and Alabama A&Ms of the country.  If you're looking for a challenge, though, try marching Columbia into Lincoln to take on Nebraska.

The playbooks are filled with traditional college plays and formations such as options and power I's.  On top of that, the plays are done right and play out like you'd expect them to.  For example, the option is great for some exciting plays and the chance to really break out for a long gain.  However, you also run a higher risk of putting the ball on the carpet and turning it over.  That's how it plays in college football and thats how it plays in the game.  In addition to the standard plays, each school also has unique plays based on the schools' actual playbooks.  Playing through a season as a different team often calls for different strategies and provides a different play experience.