There are a lot of platformers out there.  They seem to come on the scene in a steady stream and then quickly fade into obscurity, undone by their lack of originality or by a host of fatal flaws.  It's hard to be truly original in a genre that has been so done to death, but occasionally a game comes along that does a great job of doing things right, resulting in a fun gaming experience.  Ratchet & Clank is one of those games.

Ratchet & Clank is named for its two protagonists, a lombax (a fuzzy raccoon-cat creature) who loves to tinker with gadgets and a reject from a killer robot factory.  Clank was made way too tiny to be a good warrior, but the same glitch that made him diminutive also made him highly intelligent and gave him a pretty strong sense of decency.  It turns out that the evil robot factory has been working overtime to build an army for Chairman Drek, leader of the Blarg.  The Blarg have so polluted their world that they've decided to build a new one.  The problem is, they want to take all the good parts from everybody else's worlds.  Clank is determined to warn the galaxy and put an end to Drek's plan.  After crash-landing on Ratchet's backwater planet, he enlists Ratchet's help in his quest. 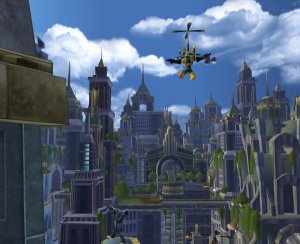 So begins your adventure.  For the most part you will control Ratchet as he goes from planet to planet with Clank strapped to his back.  Ratchet is never without his trusty wrench, which he can swing as a weapon, use to smash open crates, and turn bolts that act as switches.  In addition, Ratchet will come across more than 35 different weapons and gadgets.  Some of these are offensive and range from your usual blaster gun to some pretty imaginative means for dispatching enemies.  For example, there's a Glove of Doom which launches a bomb that explodes into little chomping robots with crazed eyes and a maniacal laugh that's great for taking out a group of enemies.  There's also a Suck Canon that sucks in smaller enemies so that you can fire them as missiles at others.

Other gadgets are useful for making your way around the various planets that serve as the game's levels.  There's a grappling hook which can be used to swing across chasms and another gadget that can be used to decode locks that play as mini-logic puzzles.  The gadgets help to increase Ratchet's number of moves to over 20 by the time you collect them all.  Clank can also receive upgrades that will give Ratchet some cool tricks, like the helicopter upgrade in the screenshot on this page.  Not to be outdone by Ratchet and all his toys, Clank will have the chance to shine on his own and you'll have the opportunity to control him solo in a few sequences.

Standing in our heroes' way is a multitude of alien creatures and killer robots with a variety of deadly attacks.  They come after Ratchet and Clank with guns, flamethrowers, buzz saws, big teeth ... you name it.  Most of them won't give you too much trouble, especially those early in the game, and you can usually take any given enemy out with several of the weapons at your disposal.  It would have made the game more challenging had the enemies been designed with only a weakness or two forcing you to pick the right weapon for the job, but as it stands you'll usually use the weapon for which you have the most ammo.

Destroying enemies rewards you with bolts, as does smashing the aforementioned crates.  Bolts are the currency of the game and can be used to purchase weapons and ammo, and to bribe or pay off certain key characters.  There are plenty of bolts in the game - you'll literally pick up tens of thousands of them.  Luckily Ratchet is a bit magnetic, so close counts when it comes to picking up bolts.