Star Wars Jedi Knight II takes place several years after the events of the Return of the Jedi movie.  The Rebel Alliance has formed the New Republic and the last of the former Empire's forces have been trying to regroup and are now known as The Remnant.  Players take on the role of Kyle Katarn, a mercenary on a mission for the New Republic.  Kyle will be a familiar character to those who played Jedi Knight II's two prequels: Dark Forces and Jedi Knight, and they will be happy to see that he is still the reluctant Jedi.  As the game opens, though, Kyle has shunned the Force and the ways of the Jedi.  He is on a mercenary mission for the New Republic with his partner Jan Ors when they are sent by Mon Mothma to investigate a mysterious distress call.  After landing, they soon discover that the Remnant is hatching a hideous plan and quickly get swept up in the effort to stop the Remnant at all costs.  This mission forms the game's storyline, and will take the player through 24 levels in eight locales.  Some of these, such as Yavin and the Cloud City of Bespin, will be very familiar to fans of the movies, but the game also takes the player to a host of new locations. 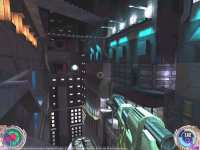 The game's storyline is engaging and is integrated nicely into the missions through the use of cutscenes and comments made by Kyle as he makes his way through the missions.  These cutscenes are all well done, and move the story along nicely without the need to bombard the player with excessive in-game movies.  The voice acting is top-notch, and the game even features Billy Dee Williams providing the voice for Lando Calrissian.

Jedi Knight II's single-player campaign almost feels like two different games.  The missions which take place in the game's first two locales occur before Kyle regains his Force powers and lightsaber, and play out like a standard shooter.  Despite some interesting moments which include manning laser canons and taking on AT-STs, the early missions can be pretty frustrating at times.  There are a bevy of jumping and switch puzzles, and players can sometimes get stuck retracing their steps over and over looking for a missed access tunnel or door.  To make things worse, the weapons available at this stage are not very good.  Kyle's personal weapon, the Bryar Blaster Pistol, has a slow fire rate and the E-11 Blaster Rifle carried by the hordes of stormtroopers encountered is amazingly inaccurate.  While this explains why the stormtroopers had such a bad time hitting any of the heroes and heroines in the Star Wars movies, it makes for some frustrating moments as the player can easily empty half of his/her ammunition in an attempt to hit a distant enemy.  The enemies themselves exhibit inconsistent behavior.  Some stormtroopers act intelligently, using obstacles to avoid fire and attempting to flank the player.  However, just as often the player will encounter stormtroopers that will run right up to the player and take a knee in front of Kyle before opening fire.

Once the early missions are completed, the player will need to solve a series of puzzles to gain use of some Force powers and gain a lightsaber.  At this point the game goes through a metamorphosis.  The enemies in the later levels, which include a host of aliens from the movies, become much more intelligent - they'll take cover when under fire and try to move to better firing positions.  There are still a fair amount of puzzles, but they don't dominate the game as much as they do in the early stages.  Best of all, the Force powers and lightsaber add a whole new dimension to the game.

The player gains Force powers while progressing through the game - a total of eight in all.  These include simple Force push and pulls, and the always fun Jedi Mind Trick and Force Grip.  Suddenly players can push enemies off of catwalks from a distance, pull weapons from their hands, or even slow time around themselves when facing a mass of enemies, leading to some Max Payne-like sequences.  Each of these Force powers also increases in power through three different ranks as the game progresses, making them more powerful and allowing them to affect more enemies.