The mafia has always held a strange grip on the public's imagination.  How could men who so value respect, honor, and family also be so violent and vindictive?  This strange duality has made gangsters interesting subject matter for countless books and films.  It would also seem a natural subject for computer games, but there have been surprisingly few games on the topic.  Mafia not only corrects this oversight, it does so in such a stylized and compelling manner that it may be remembered as one of the definitive games on the topic.

Mafia follows the story of Tommy Angelo, a cab driver trying to make a living in a fictional Depression-era city.  Tommy is not a thug or psychopath, but through a series of circumstances that place him in the wrong place at the wrong time, he is taken under the wing of one of the city's "families".  Tommy starts out as a footsoldier and glorified errand boy, but slowly and steadily gets sucked deeper and deeper until even he is surprised by the level of violence he is capable of carrying out.  It would have been easy to put you in the role of a thug and then send you out to commit violent acts.  Instead, the game's designers weave an excellent and compelling story that demonstrates that even nice guys can be seduced by the power and violence of the mob.  You are with Tommy every step of the way on his journey down the road of damnation, and his eventual attempt at salvation. 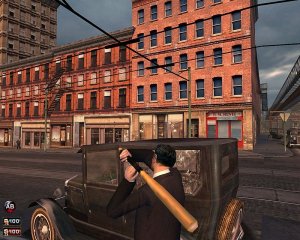 The game's story is made all the more immersive by the living, breathing city in which it takes place.  The city has a downtown, poor, rich, and ethnic neighborhoods, different districts - a full 12 square miles of city has been created for the game.  Navigating is easy thanks to a map which can be overlaid on the screen to let you know where you are and where you need to be.  When traveling through town, the streets are filled with traffic and the sidewalks with pedestrians.  There are streetcars that run regular routes through town and even an elevated rail system (yes, you can ride them).  The car drivers are just like those you'd find in any big city - some are safe and law-abiding, others turn right from the left lane or doze at stoplights.  These aren't just cars running on a rail like the Autotopia ride at Disneyland; negotiating traffic in the game is a very realistic experience.  The pedestrians also make the city feel alive, and they react to the actions that you take.  Pull a gun out on the sidewalk, and they run away in panic screaming for the police.

Speaking of the police, they are a regular fixture on the streets of the city, both as cops walking their beats and cruisers on patrol.  If you are caught speeding or running a red light, you will be chased down and forced to pay a fine.  That's assuming you decide to stop.  You can always try to drive away and instead risk arrest and the failure of your mission.

Weather and time of day are also used effectively to set mood and atmosphere during the game's campaign.  Although not cyclical or dynamic, when there is weather it is pretty impressive.  For example, one mission takes place on a farm just outside of town.  It's supposed to be a simple pick up and delivery, but something is not right.  The feeling of suspense and uncertainty is fed by a thunderstorm that really begins to let loose as you begin to search the farm.  Trees sway and creak in the wind as leaves are torn from their branches, the rain pounds on the roofs of tin shacks, and lightning strikes flash on the horizon.  Perhaps it's a little melodramatic, but it sure makes the level great to look at and even more fun to play.

Cars figure very prominently in Mafia.  Your missions begin at a small Italian restaurant that serves as your family's headquarters.  From there you must obtain a car and drive to the location of your mission.  Most missions require that you drive your way back to the restaurant as well, sometimes with the police or rival gangs in hot pursuit.  Cars are controlled by using the arrow keys to steer, brake, and accelerate, and can optionally be driven with anachronistic automatic transmissions.  The game's physics model is absolutely amazing, and different cars will all handle differently when driving.  You'll slow down on uphill slopes, and pick up speed on the downgrade.  You'll feel the tires slip on grass or sand, and can see the suspension at work as you drive over curbs or bumps.  Damage is also modeled realistically and has a definite effect on your car's handling - bumpers come loose after collisions, flat tires pull your car in one direction, and bullets put holes into the car's body and windows.

You can tell that the game's designers really liked the job they did on the cars, since you are forced to drive to the location of every mission.  The city is such an interesting place to drive through, but it can be a little tiresome to be forced to drive out and back every single time.  However, the game's designers went too far in one mission that is entirely car-based and feels out of place with the rest of the campaign.  You will be called on to drive a race car for the mob after the driver they bet the bank on suffers a broken arm on the day of the race.  You are then placed in a 1930s race car and required to win the race to succeed in the mission.  The trouble is that the track is quite long, has some nasty curves, and you need to complete five laps.  Adding to your woes is the fact that there are two cars that always drive the track fast and flawlessly, making it impossible for you to win should you make a mistake at any point in the race.  This sequence might have made a fun minigame, separate from the campaign, for those that enjoy auto racing sims.  Instead it is a frustrating and tedious trial that will make things difficult for many players - especially since action gamers are not necessarily familiar with the touchy controls and driving techniques of racing sims.