Superheroes would seem a natural subject for a computer game, but the industry has seen very little in the way of games based on the 'men in tights' world of comic books.  The long wait for a superhero-focused game naturally puts a high degree of expectations on the first big game to feature superheroes.  Freedom Force meets this challenge admirably, knocking down cynical naysayers with a resounding "Ka-Pow!". 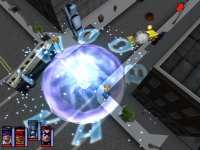 Freedom Force harkens back to the glory days of comic books, where superheroes in gaudy costumes unwaveringly fought the good fight while dispensing corny one-liners as they knocked out the forces of evil.  In today's world of brooding and self-loathing heroes, it is a welcome breath of nostalgic fresh air.  Freedom Force does an excellent job of catching the spirit of the comics 40 or more years ago, without falling into the trap of becoming a derisive parody.  Tongue planted firmly in cheek and with an occasional wink at the player, Freedom Force has fun with its subject matter without simply making fun of it.

The Freedom Force is a collection of superheroes akin to the Super Friends or Justice League of America.  It is 1962, and an intergalactic conflict has caused canisters of "Energy X" to be rained down on Earth in the vicinity of Patriot City, USA.  Those exposed to the mysterious Energy X become imbued with its radiation, gaining unique special powers and becoming superheroes and villains.  The player begins with a single superhero, eventual Freedom Force front man The Minuteman, but as the game's campaign progresses new heroes are introduced and added to the team's roster.

The game's missions are played out comic book style, generally opening with the Freedom Force relaxing at its secret base, then responding to some new crisis which leads to a series of cliffhangers and plot twists, and which concludes with a confrontation with a nefarious super villain.  As the campaign progresses, players come across new heroes with different powers who will join up with the Freedom Force.  Each of these missions begins with an opening cinematic that sets the story for the mission.  These are all well done using both a comic book style presentation with brightly colored and minimally animated panels and also with in-game style cutscenes.  You will then be able to select which members of Freedom Force to take into the mission.  Typically four heroes are selected, but some missions require a certain member be present or will make a hero unavailable.  Completing a mission involves the successful completion of a set of objectives, some of which might be added as the mission progresses.  A mission ends in failure if you fail to complete any of the objectives or all of your heroes are knocked unconscious - in true comic book fashion, no one dies in the game, they are merely KO'd.  Sometimes there will be secondary objectives at the beginning of the mission or added later as they are triggered by other events.  Completing the additional objectives results in prestige rewards for the team.