Dwarven Skykeep is a mash-up of tower defense and deck-building gameplay. Sometimes genre mash-ups lead to interesting results, and sometimes they don’t. This game falls into the latter category.

In Dwarven Skykeep, you play a wizard leading dwarfs in the construction of towers, or rather towers over mines since you can build down into the ground as well as up into the air, but we’ll just call them towers here for the sake of simplicity. Each room is a square cell with an opening on one or more of its four edges. You’ll draw new rooms from a deck, with two room cards chosen at random available for play at any given time. The catch is that you can only place one of these room cards if the openings align with one or more of your existing rooms, so your tower’s design is dictated by chance. You may be forced to go up when you’re trying to go down or to open up more entrances to your tower. Those entrances are problematic, because they provide enemies access to your tower, let in rain water that will flood your lowest levels, or create a crosswind that can spread fires from room to room. At least you won’t have to worry about structural integrity - these towers are unburdened by the laws of physics. There are ways to create new openings in a room, but to do so you’ll need the right card. 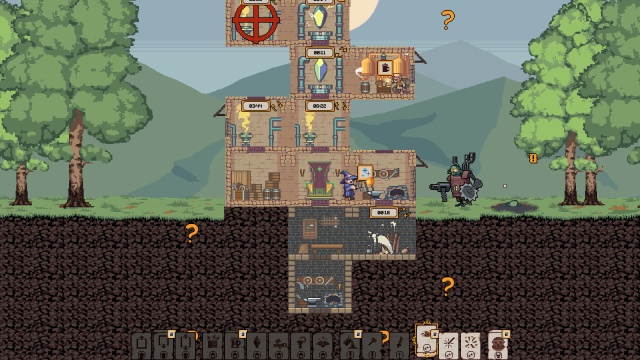 Each room can also be assigned a role, as long as you have the right card. These fall into two basic categories in that they are either used to produce physical or magical resources. The physical workshops gain bonusses the further underground you build them, and similarly the magical ones gain bonuses the higher in the air they are placed. There are also bonus squares in each level marked by question marks. If you build a room over one of these, you will unlock the mystery resource contained in the square.

When you place rooms or build workshops, they are not instantly created. This is where the dwarves come in. You begin each level with a dwarf, with the opportunity to add more should you be lucky enough to gain a dwarf card, or a card that lets you build a tavern – those seem to always come with a bonus dwarf. Dwarves will make their way to newly placed room or workshops and begin work, but if you play multiple cards the dwarves will decide for themselves which order they want to complete their tasks in. The dwarves are motivated by beer, which is provided through the tavern. However, I’m not really sure that it’s vital to have a tavern – I never had dwarves go on strike or walk off the job. 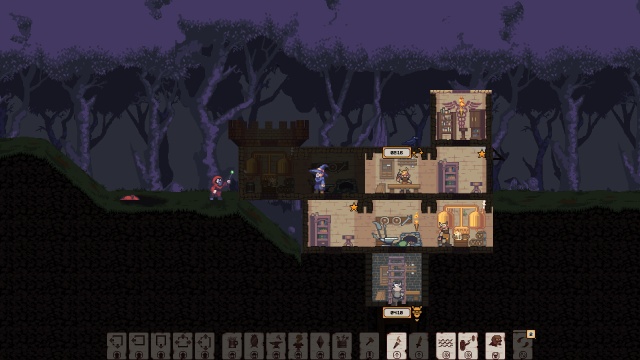 A lot of the balance in the game just feels off, too. Invaders come quickly and often, and there’s just no time to get your tower into a minimal defensible state. Even if you get lucky and have the cards to close off your tower, the game punishes you for this tactic by generating enemies from a moving warp portal within your tower. Your wizard is forced to collect items from the rooms that they are produced in, but you can’t give commands to your whole tower while you’re off the throne. It feels like these and other restrictions were added to compensate for issues with the gameplay, when what was needed instead was more time spent refining and balancing it. Perhaps one day a game can make these two genres work together, but Dwarven Skykeep isn’t that game.