Whateverland puts you into the sneakers of Vincent, cat burglar who picks the wrong person to rob. As he attempts to purloin some exotic jewelry he is caught in the act by its owner, Beatrice. Soon being caught is the least of Vincent’s worries, though. Beatrice is a witch, a witch who’s created an alternate dimension where she sends anyone and everyone who wrongs her. This dimension is known as Whateverland, and you soon find yourself waking up in its garbage dump.

Whateverland is an adventure game in the classic point-and-click mold. You traverse the 2D world of Whateverland one screen at time, clicking on the interactive objects to hear what Vincent thinks about them or to add them to your inventory. Items from your inventory can in turn be used with other interactive objects to solve puzzles and move the story along. You’ll also encounter other people who Beatrice has sent to Whateverland, and be able to engage in conversations with them. 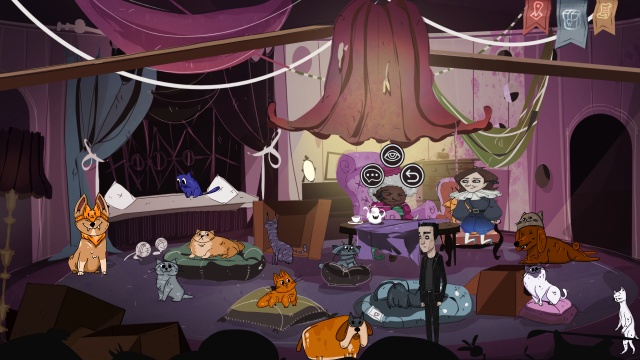 One of the first persons you’ll encounter is Nick, who will serve as your guide and companion in Whateverland. You’ll learn two important things from Nick early on. The first thing is that the longer you spend in Whateverland, the more you’ll be transformed into the worst version of yourself. Nick is well on his way to becoming a ghost, which explains why he floats a foot above the ground as he follows you around. The other thing you’ll learn from Nick is that there may be a way out of Whateverland. There is a spell that can be used to summon Beatrice, and if you can summon her you may be able to convince her to let you leave Whateverland. The catch is that the spell has been torn into seven pieces, and each piece is held by a different person, and none of them are just going to give it to you.

The game lets you pursue the pieces in any order you choose – Nick knows all of the people and will give you a bit of a briefing on each one. You’ll also have a choice as to how to obtain each piece. You can choose to do a favor in exchange for each piece or you can attempt to steal them – you’re a thief, after all. The path you choose will have consequences and also determine which of the game’s endings you’ll see. The game makes it easy to tell which path you’re choosing – choices that have consequences are marked with a symbol, a sun for the good path, a moon for the morally questionable option. No matter which you choose, expect to have to work your way through a different puzzle to obtain each piece. 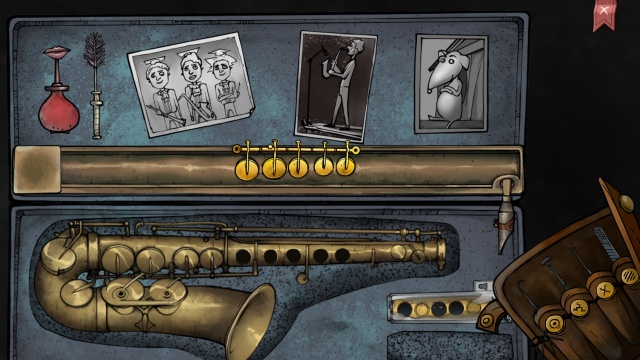 Unfortunately, to obtain information or critical items from some of the game’s characters you’ll need to beat them at Whateverland’s favorite board game, Bell and Bones. This is a turn-based strategy game in which each player has the same four game pieces, each with a special ability. The goal is to use your pieces to advance the bell into your opponent’s goal. It’s a poorly designed game that is tedious, somewhat confusing, and takes too long to play. Thankfully you can obtain tokens while playing the game that can be exchanged for an instant win. Why there’s a tedious turn-based strategy game crammed into an adventure game is a real head-scratcher. Whatverland would be better off without it. 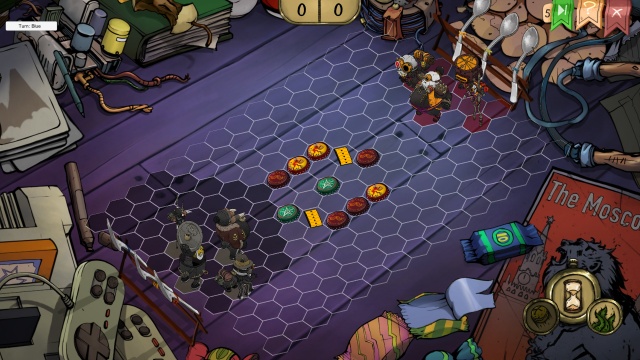 Despite Bell and Bones and the occasional bug, Whateverland does have its charms - the game’s setting is certainly unique. There are some interesting characters inhabiting Whateverland and some of the puzzles are fun to work through, but that’s not consistent throughout the game. The burglary path puzzles can be rather frustrating at times. Point-and-clickers will probably be more forgiving of the game’s rough patches given the dearth of games in this genre these days, but others may not find the motivation to press on through to the end.