Backroom Beyond is a puzzle platformer developed and published by White Vortex Games. The game is based off of “The Backrooms” urban legend and creepypasta. The Backrooms is a maze of randomly generated office rooms and other areas. It’s sort of like a liminal space type of atmosphere and so is the game. Backroom Beyond offers the same type of office rooms and it mixes up the background with other places later on.

Backroom Beyond has a total of 40 levels. For the most part, the objective is to find a black block with a red glow and push it onto a button that lies along the ground. The game will give you other blocks and a shovel to help add some variety. You may have to push a block against a high platform so that you can hop on top of the block to get on top of the platform. The shovel is used for moving blocks away from walls and flipping them. Once you push the black block on top of a button, that button will either open an exit door or another area in the level where you’ll have to repeat the same objective. 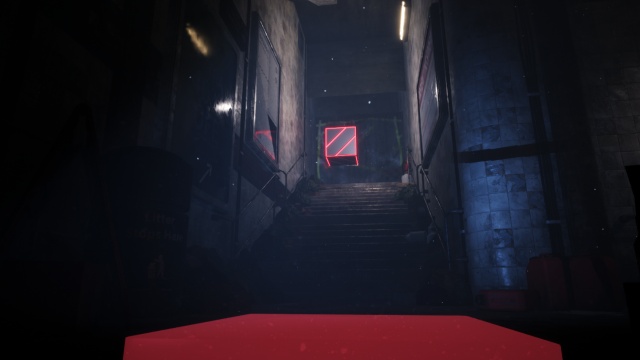 You have to walk against a block to push it. You can’t simply pick it up. It’s so very easy for the block to get stuck against a wall or push it into a corner. Once picked up, the shovel cannot be manually rotated. You have to move toward a wall and then the shovel will usually rotate to where one of its ends is able to push the block away from the wall. One of the most frustrating parts about completing puzzles is trying to push the block onto a button. Sometimes the block will not want to go onto a button. I often have to get a shovel and flip a block over onto a button to get it to activate. There are times where a shovel isn’t available and I’ve had to fight with pushing a block onto a button for several seconds.

The overall atmosphere to Backroom Beyond is quite good. It has the same music track that keeps repeating throughout its stages, but it’s enough to give off some creepy vibes. Early stages are composed of yellow corridors with writings on the walls. Sometimes the writings will give hints and sometimes they are completely random and don’t mean much of anything. Later on, the game changes the environments to more interesting areas. The gameplay never changes by much however. 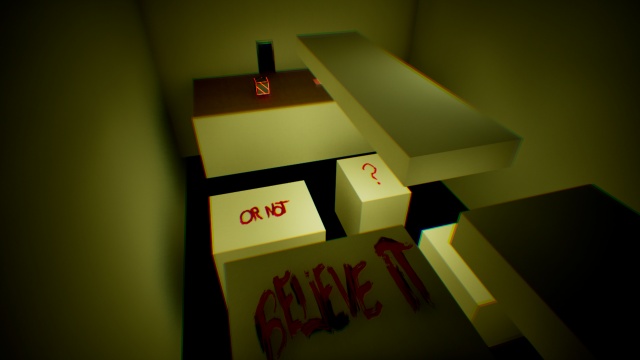 Backroom Beyond is overall extremely repetitive. The worst part about playing it is that there is such little reward for completing each room. Your only reward is to simply start the next area. The game has an interesting subject matter, but the overall gameplay just isn’t fun for too long. Even though the game changes up each level, you’re still doing the same thing in the long run (pushing a block over a button) and it doesn’t hold up well for long. This game needs more variety in its puzzle solving.

The Good:
+ The overall atmosphere and subject matter are interesting
+ Music is solid (even with the one track)

The Bad:
- The game is highly repetitive
- There is no reward for completing rooms
- You can’t toggle the run command (really bad for controller uses who have to hold down on the left thumbstick while moving to run)

Final Rating: 50% - Backroom Beyond is a highly repetitive puzzle platform based off “The Backrooms” urban legend.