If you’ve played any of the Kingdom Rush games, then you’ll know that they are an enjoyable take on the tower defense genre. In spite of their bright cartoony graphics and fun sense of humor, these games had a surprising depth to them and provided a good degree of tactical challenge. Legends of Kingdom Rush takes all of the style, substance, and challenge of the prior Kingdom Rush games, but applies that to a new genre, tactical RPG. This genre is new territory for Ironhide Games Studio, but they’ve crafted such an enjoyable game here that you’d think that they must have been making tactical RPGs for years.

The game is played out on a collection of “adventure” maps, which are self-contained series of missions that culminate in a boss battle. They are unlocked in turn as you beat each one, and taken together they form the game’s story. Each map opens with a comic book panel styled cutscene that sets the stage for the map. These are wonderfully illustrated, featuring a fun art style and bold coloring, and it’s a shame that there isn’t a regular Kingdom Rush comic series available. 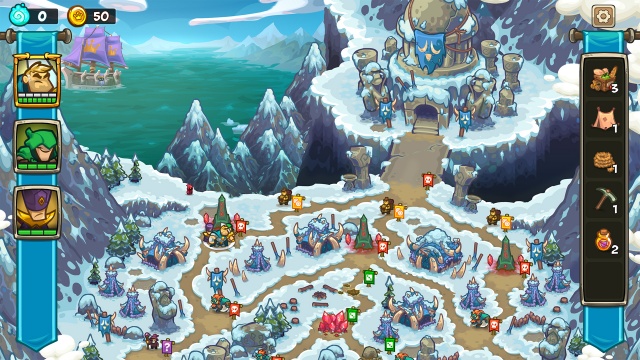 The maps consist of a series of branching nodes that eventually converge on the node containing the boss battle. You can only move forward, so the path that you take at each branch will essentially prune other paths from the map. You can see what type of encounter will occur at each node, though, so you’re not moving blindly forward. Possible encounters include battles, random events, shops, and recruitment opportunities. There can also be random encounters as you move between nodes. Sometimes these are ambushes that lead to battles, but others are short scenarios that will lead to penalties or rewards based on your decisions. Some of these will provide you with additional options should you have certain characters in your party or items in your inventory. The inventory item options will use and remove the item from your inventory, while the character options will give you the opportunity to roll one or more dice to determine the outcome. I must admit that I like watching the random number generator at work rather than just coldly being handed the result.

The battles take place on a hex-based map, with your party’s position predetermined for you. In general, Legends of Kingdom Rush simplifies and streamlines the tactical gameplay experience, which seems to have grown in complexity recently. For the most part what matters is proximity and line-of-sight, with things like facing and opportunity attacks only coming into play if a character has a special passive ability or attack type. Turns are taken per character using a speed/initiative system, and you’ll see the order of play shown as a queue at the top of the screen. Most characters can perform a single move and a single action per turn, although there are character-specific exceptions to this rule and certain statuses such as being dazed or bound can affect what a character can do on their turn. Some characters are armored and you’ll need to eliminate each unit of armor before you start eliminating health, but like everything else there are some exceptions that can bypass armor such as magical attacks. In addition to dealing with your enemies, you’ll also have to contend with map-specific hazards such as carnivorous plants or random lightning strikes. Luckily, these can affect your enemies as well. 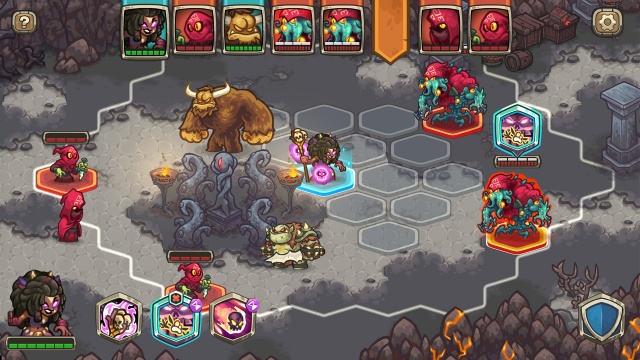 While the basic combat mechanics eschew a number of the complexities you’ll find in modern tactical games, this does not mean that the game is easy or that it doesn’t require some sound tactical thinking. The sheer number of combinations of attacks and abilities that can come into play based on the mix of your party and the enemies that you are facing will force you to adjust your strategy with each battle. You’ll find the battles challenging, and that mistakes that you make may be difficult to recover from.

Health is not automatically restored after a battle, so if you’re not careful you can find yourself at a distinct disadvantage at the start of the next one. Characters who fall in battle will be available again should you win, but at reduced health. If you’re carrying any restorative items in your inventory, you can use them on your party between encounters. The inventory is shared among your entire party and items will remain in it between adventures, only being removed when they are consumed. This inventory only includes items to heal and remove negative statuses from your characters or items that can be used during adventure encounters – there is no character gear in the game.

The adventure maps are a little rogue-like. Characters are given both an adventure level and a rank, the former of which resets when you complete an adventure either by beating the final battle or by losing your entire party in battle somewhere along the way. Adventure level increases with experience gained on a map, and is used to unlock characters’ second and third tier attacks as well as increase their base health level. Rank represents accumulated experience over all of your adventures and advancing in rank allows your characters to unlock additional attacks and powers that will be available for use on future adventures. This all means that each attempt at an adventure will be a fresh one and that you’ll need to rely on your tactical skills each time rather than on a leveled-up party. This helps make the adventures replayable, and gives you the chance to experiment with different combinations of characters in your party. 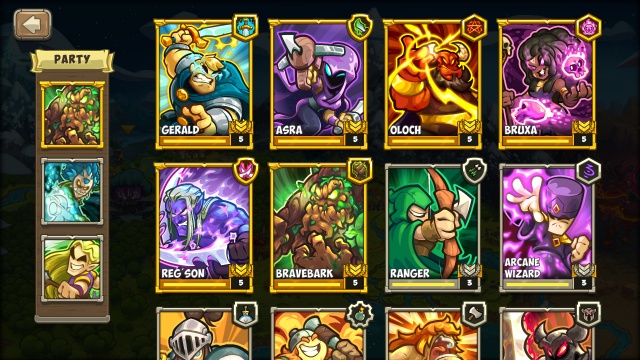 There are 18 characters in all, but not all of them will initially be available. Some will be unlocked after you complete certain maps, others by unlocking achievements during play. As you make your way through a map, you may find that you’re given the opportunity to recruit a new character for your party. These characters are drawn from the entire roster, not just those that you’ve unlocked, so it’s a good way to get a feel for some of the other characters that remain locked and give you the chance to work to unlock those that you find that you liked.

In addition to the adventure mode, there is an arena mode. This mode creates rotating set challenges for you to face outside of the adventure. After you complete a battle, either through victory or defeat, you’ll be given a score based on your performance. These scores are uploaded to daily and weekly leaderboards so you can compare your skills to those of friends and strangers. 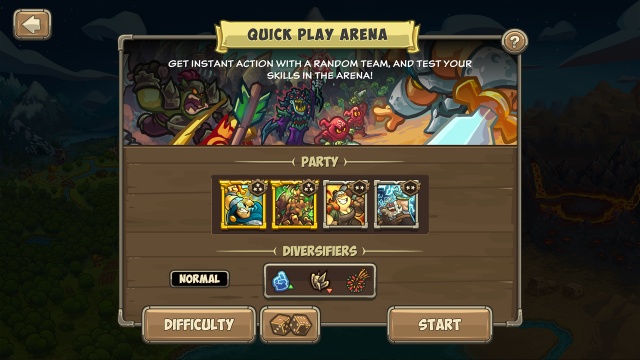 Overall, I had a good time with Legends of Kingdom Rush. I loved the art style and music, and enjoyed the surprising amount of challenge provided by its battles. It may not be as complex a game as those who are into the tactical genre may be used to playing, but I think that makes the game more accessible, and it manages to do so without making the battles cakewalks for those who still want to put their tactical skills to the test. I also liked that the battles play out relatively quickly since I sometimes find that tactical games require so much time to complete battles that they can be a slog to get through. If you have a Steam Deck, the game is mouse-based and has no controller support so you’ll need to use the pad and triggers as a mouse. It’s not the most precise way to control a game, but you can get by if you’re on a couch. It may be a little frustrating if you’re in a vehicle, though.

Final Rating: 85% - Once you leave your towers to rush into battle, you’ll find that things are just as challenging on the ground.