Card Shark casts you in the role of a mute ward of a tavern owner in 18th Century, pre-revolutionary France who lives a life of perpetual servitude. One evening the Comte de St-Germain visits your establishment and enlists your help to cheat at a game of cards by peeking at his opponent’s cards. Things go horribly wrong when the mark realizes he is being cheated. He pulls out a pistol and in the ensuing struggle your matron is accidentally shot dead. The Comte knows that as penniless mute you will take the fall for the crime committed by a nobleman and hurries you out of the tavern. His motives are not entirely altruistic, though, as he immediately takes you under his wing and begins training you to be both his apprentice and accomplice as he travels around France swindling the rich at cards. 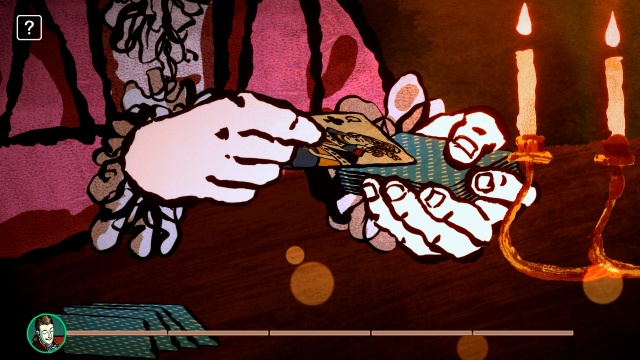 At this point you may think that Card Shark is a game about playing cards. It is not. What it is instead is a game of cheating at cards. In fact, you never actually play a game of cards and never learn what card games the characters are actually playing. The cheating involves signaling cards, stacking the deck, and other such tricks, and they are all accomplished by playing various mini games. You may move the controller’s stick in different directions to signify a suit, use the buttons to signal a high card, or the d-pad to jog a card in the deck so that it is cut the way you want it. As you travel with the Comte to a new location, he will teach you a new trick and give you the opportunity to practice it before you’re put to the test. You’ll have to succeed at the trick once before you sit down at the table, but you’re given an unlimited number of practice tries before you move on. Sometimes these practice sessions can be a bit frustrating, because it’s not always clear as to what you’re trying to accomplish. If you make a mistake during an early step in the process, the game still makes you go through the rest of the steps as there’s no way to abort so that you can try again from the beginning. After a few failures, things eventually become clear enough for you to try at the table.

Things won’t be so casual when you’re at the table. Mistakes will lead to lost hands, and lost hands mean lost coin. But that’s not the biggest risk you face. If your opponents become suspicious that they are being cheated, it can lead to your arrest or even death. Their suspicion level is represented by a bar at the bottom of the screen. Betting heavily too early in the game will cause it to jump ahead, but it will also slowly move forward as you are completing the cheating mini games. This essentially makes it a timer, and if you take too long to complete the mini games your opponent will accuse you of cheating. This timer is cumulative, so you’ll need to be efficient during every deal to keep your opponent fooled. 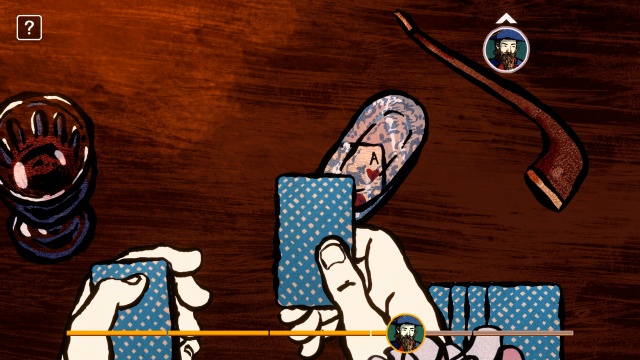 The card games end in one of four ways. If you take all of your opponent’s money, you clear the level and the story advances. If you lose all of yours, then the card game and the level both end. You can also choose to leave between hands, which is a safe way to abort a game if you’re too close to getting busted for cheating. The final way is to get caught cheating which can land you in jail or get you killed, neither of which will end the game unless you are playing at the highest difficulty level.

The mini game controls aren’t necessarily intuitive, so you’ll need to practice each cheat several times and commit the moves to memory. You can pull up help text as reminder of the controls, but if you’re bouncing back and forth between the cards and the tips you’ll probably run into trouble with the suspicion meter. The deeper you get into the game, the more tricks you’ll need to master – there are over twenty in all – and it can be difficult to remember all of the steps involved in a trick that you learned earlier. As such, Card Shark is a game that you should play straight through in a limited number of sessions, as you’ll probably be forced to begin anew to relearn the tricks if you’ve been away from the game for more than a few days. Lastly, while it can be fun to pull off some of the tricks at first, there is a lot of repetition involved. Some have you moving around the table and out of sight as you stack decks and switch cards, and you’ll need to repeat the ritual again with each new deal.

Since you’ll be spending a lot of time practicing with the Comte and replaying games that you previously failed, the game’s story of your rise through French society and involvement in a royal conspiracy is doled out in small bite-sized morsels. This makes it difficult for the narrative to come together into something that feels fully cohesive rather than a bit disjointed. Also, you’ll spend most of your time with the Comte, so the game’s other characters have fleeting roles and aren’t given much room for development. 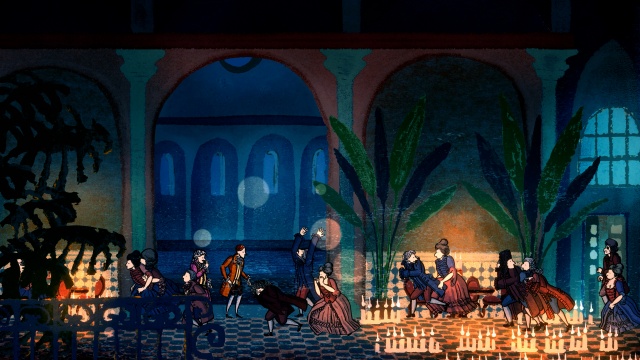 Card Shark’s visuals are both unique and appealing. The backgrounds and locations have the look of watercolor paintings, and the characters stand out against this with their heavily inked outlines. It almost looks like you’re playing the game within a painting. I only have one complaint about the art, and it’s that the card suits look too similar. It’s not a much of an issue when playing on a PC, but the game is Steam Deck verified and when playing on that system it can be difficult to tell if you’re counting spades or clubs when you’re given a brief look at upturned corners of cards on the table.

Card Shark isn’t a game for everyone. You’ve got to have some patience to both learn the controller combinations to successfully pull-off each step of the cheats and to repeat all of those steps several times during the course of a card game. You also need to enjoy games that are essentially a collection of mini games, and that don’t have much interaction between those games. If those caveats don’t bother you, then you’ll probably find the game’s unique look and setting charming and appealing, and enjoy your time swindling the French aristocracy out of their ill-gotten wealth.

Final Rating: 75% - Cheat your way to fame and fortune without ever actually playing cards.