Chinatown Detective Agency is set in 2037 in Singapore. You play as Amira Darma, a former police officer who now works as a private investigator and runs the titular agency out of the city’s Chinatown district. You’re just starting out and trying to build your business, but your connections to the police force help you to land your first few cases.

These first three cases help you to get your feet wet, not just as a Darma but as the player. These cases are relatively short, but they introduce you to three potential sponsoring clients and give you a feel for the kind of cases that they will send you on. Once you complete the three cases, you’ll be given the choice of signing with one of them exclusively, as well as the option of taking on another case for them in case you can’t quite decide at the moment. This essentially gives you the option to play the game through three different times and experience different cases which each playthrough.

Visually the game is a tribute to the first generation of graphical adventure games that appeared on PCs in the 1980s. The play area of the screen is blocky and low-res with a limited color palette. The game doesn’t extend this motif to the entire screen, though. Character portraits that accompany their text bubbles, as well as all of the supplemental screens such as maps and pictures of the evidence that you collect feature a higher resolution and more detail. 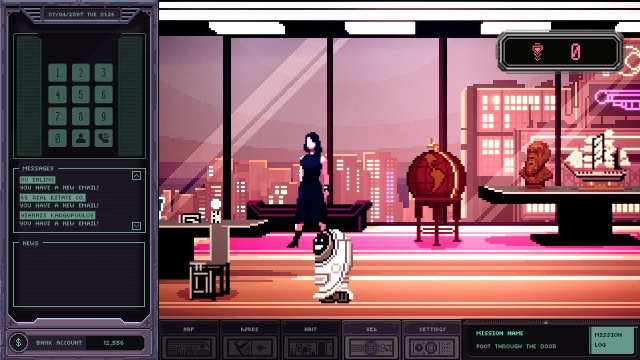 The gameplay isn’t entirely in the classic mold, though. You still move your character around a static environment looking for highlighted objects and people that are interactive, and selecting these will provide you with a text description or text-based response. Some of the major characters are voiced, but only for some conversations and not even always for the entirety of an interaction. While the voice work is good, it’s incomplete and it ends-up feeling odd to only occasionally hear the characters speak. Unlike those classic games of yesteryear, Chinatown Detective Agency doesn’t have you collecting a bunch of seemingly random objects, storing them in an inventory, and then trying to use them with each other or objects in the environment to solve puzzles and advance the story. The game is more investigation-driven – you use a few pieces of evidence and conversations with people to determine the next location you need to travel to, and often the time of day that you need to be there.

It may be surprising to you that the information that you need to solve your cases is not all contained within the game. Chinatown Detective Agency wants you to be a real-world investigator and spend some time researching things on your own. And this research isn’t done through fake websites created by the game’s developers, you’ll need to spend some time on Google to crack the cases in the game. Some clues will be pretty straightforward to research, such as finding the local name for a geographical feature to use as a password. Others won’t be. For example, one of the early cases has you returning old stamps to museums in their countries of origin. You’ll need to examine the stamps for clues, such as the language used on them, the currency the denomination is listed in, or the landmark depicted on the stamp. You can also earn a bonus on the case by determining the city from which each stamp was originally sent by examining the partial cancelation on each one. This will send you off to Google on a nearby device or computer to comb through your search results until you hone in on each stamp’s issuing country. Making matters trickier, the stamps are old, and country names change as do the countries in which some cities are located. And as you’ll find in the case of the cancelations, even city names can change and will require even further research. 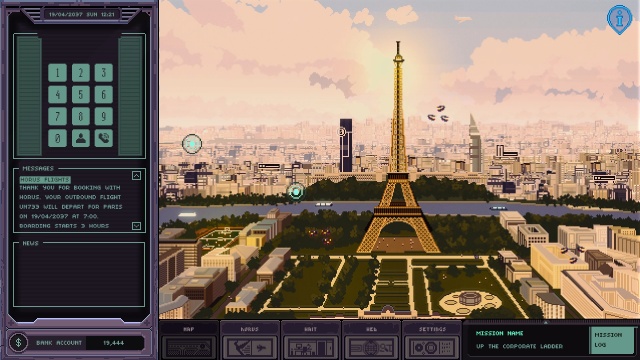 This may have seemed like a good idea – sending gamers playing a detective off to do some real-world detective work – but in practice it constantly takes you out of the game. Some of you will undoubtedly find this aspect of the game intriguing, but most will probably feel like their game time is constantly being interrupted because you need to get back to work on a term paper due the next day. If there is a sequel, or another game decides to take this approach, there really should be an in-game browser so that it at least feels like your character is doing the research from within the game’s world rather than a gamer pausing their game to do some real-world work.

Another aspect of the game that isn’t fully fleshed-out is the game’s finance system. You get paid for completing your cases, and in turn you spend that money on rent for your office and on airfare to visit all of the locations that will lead you to the next break on a case. I suppose it’s in place simply to prevent you from flying everywhere and finding the next key location through a process of elimination, but I never really felt that I had to pay attention to money beyond occasionally responding to the game’s “rent due” prompts. There is also an in-game clock, and time will pass as you travel within Singapore or jet to other cities in the world. You can also force time to advance should you need to kill time until your flight departs or you need to meet an informant. Some locations will have operating hours, or different events that will occur during the day and night. Again, it feels like the prime motivation behind the game clock is to keep pushing you towards your next payment due date. The game is essentially linear, so it’s not like there’s anything that you can do while waiting for a contact appointment or your next flight. You kill time merely to move the game clock forward and that’s it. 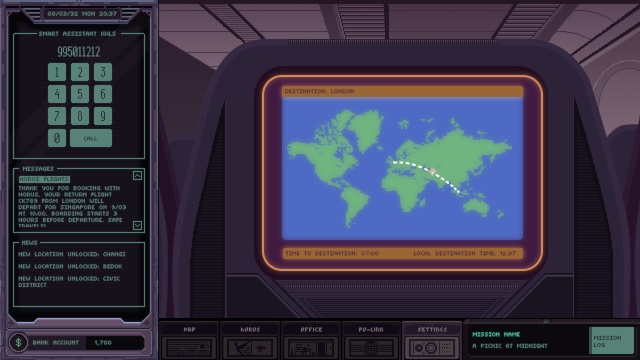 Some of Chinatown Detective Agency’s cases are indeed interesting, and the game is populated with an interesting cast of characters, but when playing through the game you can’t escape the feeling that it wasn’t quite ready for release. The financial and time systems still need some work to make them both intriguing and a factor in the game, and recording additional voice work to at least complete the conversations that are voiced at the start would definitely help. I also encountered a few bugs while playing, further making the game feel like it was not quite ready for release. Even if these and other aspects of the game were further developed, I’m still not sure that I would enjoy it much more because the need to interrupt gameplay to spend time on Google is distracting and sometimes irritating. I certainly enjoy the learning aspect that comes with the research, but I read a lot of historical articles and non-fiction on my own, and that’s during my reading time, not my game time. Combining the two simply didn’t work for me. Making things worse, the game doesn’t allow manual saves and doesn’t support mid-case checkpoints. Once you start a case, you’re going to have to see it through until the end, and you’ll have no idea how much time it will take you to do your offline research when you sit down to play.

If the game’s story, characters, and research aspect sound really appealing to you, then go ahead and give the game a try – there is some intriguing gameplay under the incomplete covers. For anyone else, though, I’d recommend that you use your real-world Google skills to find another adventure game to play.