Remember back when our resources were more limited in survival horror games? It made the whole experience scary and tense when you couldn’t save a game when you wanted to or when you had to conserve ammo or healing items because you wasted too much on the last enemy and the upcoming resources were very low in supply. Tormented Souls brings back those feelings rather well. Tormented Souls is a third person survival horror developed by Dual Effect and Abstract Digital and published by PQube. The game is highly inspired by older survival horrors such as Resident Evil, Silent Hill, and Alone in the Dark.

Players take on the role of Caroline Walker. Caroline goes to a mansion in search of some twin girls. Once there, she gets knocked out and wakes up naked in a bathtub while hooked up to a ventilator. Caroline must fight for her life against the horrors that lurk in the dark while trying to escape the mansion and find out what happened to the twins that were in the photo that was given to her. 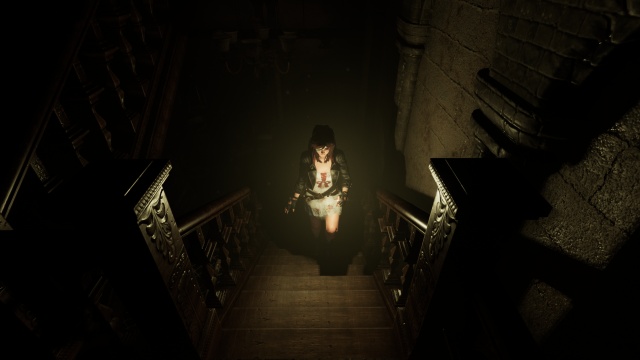 If you’re an old-school survival horror fan, this game was made for you! It has just about everything that you can find in a classic horror game. We have tank controls. We have limited saves. We have fixed camera angles. Just about anything that you can remember from classic horror titles is in Tormented Souls. Even with all the classic elements, the game still has modern controls if you wish to play with them. The game has both tank controls (d-pad) and 3D controls (Left thumbstick). Aiming and firing is done with the trigger buttons (hold LT and use RT to fire) and you can also use the A button to fire sort of like a classic setup.

This game uses darkness and overall lighting quite well. The lighting effects can get really nice in some areas. Caroline can’t survive for long in the dark since she will start to lose sanity, so you must make use of your lighting resources in dark areas or find some way to turn on the lights or light nearby candles. Starting out, you only carry a lighter, which can’t be equipped along with a weapon, so you’re stuck with either one or the other and the game knows this all too well since it will put enemies in dark areas, but there is often a candle around to light so that you can face them in combat.

The environments in this game look fantastic. Many rooms are filled with horrific sights such as squishy organs lying on the ground and dead bodies lying on beds. The mansion is partially a hospital, so the residence makes a perfect setting for horror. Your view is limited thanks to the fixed camera angles, so enemies can be waiting offscreen at times. Thankfully, the game has the auto-aim feature that you’ll find in classic survival horrors, so Caroline will immediately aim at an enemy that is near her. The game has some unique weapons in it – you don’t get the usual handgun, shotgun or magnum, but instead you get weapons with as much power as them that look way different (such as a nail gun that works much like a handgun). 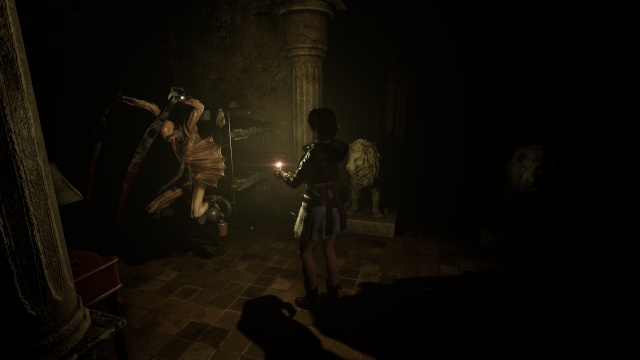 Resource management plays a big role in Tormented Souls. You have to find audio reels in order to save you game at audio players. Ammo and healing items can be scarce. This is truly a game where you have to conserve ammo or you might not have enough later on. The enemies you’ll face are quite creative and unique in their overall look. Enemies are often rotting humans that are melded with hospital gear. There is one enemy that is a torso hanging from a drip stand and it attacks with bladed walkers on its arms. One classic element that the game misses out on when it comes to enemies are boss fights. There is only one ending boss battle throughout the entire game for the most part and one (sort of) mini-boss battle.

What would a classic horror title be without puzzles? Tormented Souls definitely has you covered when it comes to puzzles. The puzzles are overall easy from the start then get quite challenging to near cryptic as the game continues. There are some puzzles that can take hours to figure out. The puzzles remind me a lot of Silent Hill puzzles where the puzzles look super complicated from the start and it is easy to overthink them. There is one puzzle in this game that is really out there and makes you do some very strange stuff in order to solve it.

The sound to the game is great. You’ll hear shuffling and sliding noises when enemies are in the room. This can really send chills down your spine when all is quiet and then you suddenly hear enemy noises coming from a tunnel up ahead. The game has a few good music tracks as well. The voice acting feels like it was done back in the 90’s. Whether the bad voice acting is intentional or not remains a mystery, but it’s certainly noticeable very early on in the game. 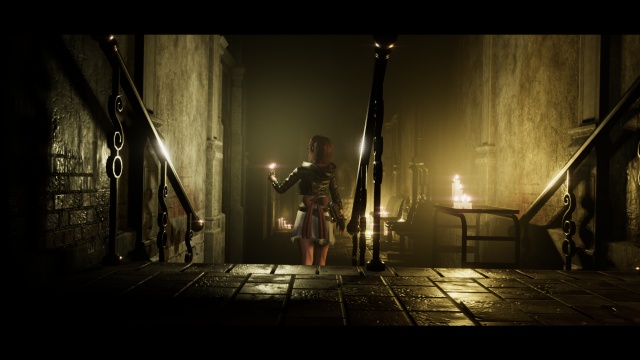 The overall story is alright, but some of the twists are very predictable. It follows your basic horror type of story for the most part. The game has a type of “Otherworld” area that is similar to a Silent Hill setup, but you get there in a different way. Sadly, once the game is beaten, it doesn’t offer any type of bonus unlockables. The game only has one difficulty. It has three endings. I spent around 11 hours on my first playthrough of the game which is about the equivalent of an 8-hour game for most people. There are several documents to find and read that add a lot of background to the story and I’m sure reading them added a lot to my overall playthrough time.

Even though the game is inspired by old-school horror titles, it is still very much its own thing. The game has a lot of its own ideas and feels unique even with its similarities. If you’re an old-school survival horror fan, you need to buy Tormented Souls. This game was created exclusively with you in mind. With the game’s value price, it’s quite amazing the amount of content in the game. If only this game had more replay value to it, it would be a super solid experience. Even without that, it’s a very fun tread through the type of survival horrors that we used to enjoy back when the genre was still young.

The Good:
+ Brings back the feel of old-school survival horrors
+ Resource management is a must in this game
+ Creepy horror atmosphere throughout the whole game
+ Good lighting effects

The Bad:
- Little replay value (this is really the main flaw)
- The voice acting could be much better
- The character models lack detail when compared to environments and enemies