Hidden Shelter is a first-person horror game developed and published by White Vortex. After crashing in the woods from some sort of bright light, Charles and Benard search for their friend Diego. Charles does not believe that Diego is still alive, but Benard still has hope in finding him, so they both search the woods and eventually arrive at a mansion. While searching around the mansion, they eventually run into a strange creature that inhabits the place.

The game is more about exploration than anything else - search the mansion and solve puzzles to advance further. There is an occasional creature chase where you have to reach a certain point to make the creature stop chasing your characters. You play as one friend and the other friend tags along with you. Unlike other games with an NPC along with you, this NPC does not get in the way much – though he sometimes will block the camera view during certain camera angles. 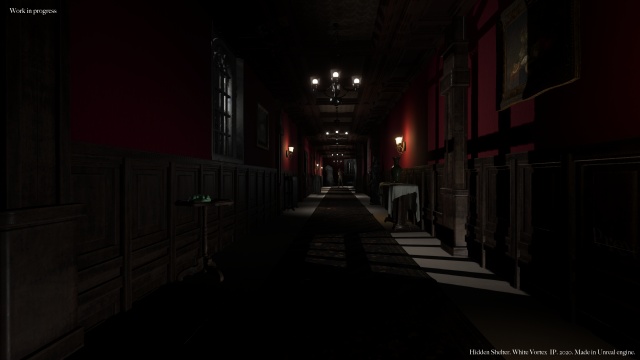 The puzzles start out a bit cryptic – such as finding a certain object to pull to reveal a secret opening behind the wall – but they eventually get super-repetitive. The majority of the game has you going from room to room in search of keys to unlock new doors. The gameplay gets old very fast. Besides some scripted creature encounters, where you must run away from the creature, key collecting and unlocking new doors is the majority of the gameplay.

Even with all the repetitive key collecting, the game did keep me involved until the end. One of the best parts about the game is the overall atmosphere. The layout and overall surroundings in the mansion are done quite well. The environmental graphics are good for a PC title, but character models suffer from simplicity. Sounds effects are fitting. The only spoken language in the game is Portuguese. The dialogue is subtitled with English text though much of the text appears too quickly or is just plain untimed along with the dialogue. I regularly watch subtitled movies and the dialogue was still too hard to keep up with at times.

The overall story is alright, but it does have a very unsatisfying ending. The game has both keyboard and mouse along with Xbox controller support. I played through most of the game with a controller. The default options definitely favor controller with the super-fast turn speed but it can be changed to fit a controller. Honestly, the game seemed like it would have been a better experience with keyboard and mouse with the game’s overall setup. The in-game icons still have keyboard or mouse icons rather than controller even after switching to a controller, so you have to figure out which buttons to press in certain areas. 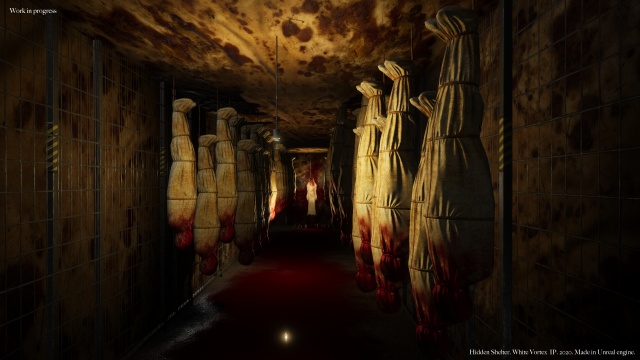 The game has a few jump scares here and there, but you hear the loud noise before you even see the actual scare. There were times where I didn’t know what the game was trying to show me – all I knew was that I got the jump scare noise and that I just “witnessed” a jump scare. The game does seem to have some secrets which could encourage a replay. For a budget title, the game is actually decent. Overall, it’s a 50/50 chance whether you’ll like this game or not. If the game was more expensive, it would be easier to lay down a lower score, but with its current price point and the fact that I stuck with it all the way through, it’s actually a decent title for the price.

The Bad:
- The game is repetitive (too much key collecting)
- The subtitles aren’t timed well with the spoken audio
- Jump scares are more about noise than what actually happens

Final Rating: 50% - For the price, Hidden Shelter is an alright horror title.