If you play board games in addition to video games, you’ll instantly recognize Dice Legacy to be a dice drafting game. Roll the dice, select which dice to deploy, and then roll them again. The gameplay mechanics aren’t too complex at first glance, but like all good games, physical or virtual, the relatively simple rules belie the depth of strategy.

Dice Legacy puts you in control of a medieval village set on the inner rim of a ring world. Your goal is both to survive – against the elements, raiders, and other villages – and to expand your village along the ring. The game is described on Steam as a “survival city builder”, but at first it feels more like a traditional strategy game, just one played with dice. I suppose you could call Age of Empires a survival city builder as well. 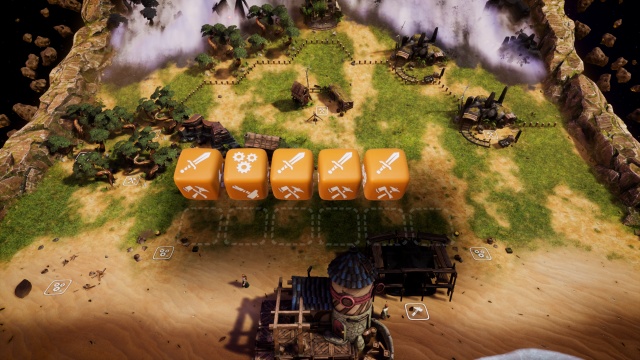 The color of your dice represents its class and each face an action. Initially your dice will all be orange, which represents peasants, the workhorses of your economy. Orange die faces include actions such as build, gather, or fight. Each building and nearby resource location has one or more slots for dice and a pictograph that matches one of those on the dice. Fill the slots with dice that have the matching symbol and you’ll activate a countdown timer to complete the action. Once the timer expires the action is completed – resources are added to your pool, a new building is completed, etc. – and the dice are returned to your pool.

Each turn you roll all of the dice in your pool, take stock of the actions available to you, and assign your dice. I used the term “turn” loosely here because actions are timer-based and you can choose to re-roll right away or give the timers some time to run down or time-out. So why wouldn’t you just keep rolling until you got the result that you want? Because each die has a limited number of rolls. Once that limit is hit the die breaks and is lost. You can lock some of your dice before rolling to preserve their face and save its durability, so part of the strategy in the game is deciding when to risk each die. 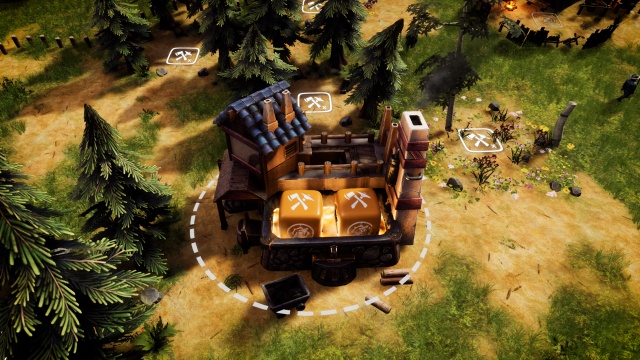 Those are the basics, but of course there are many ways to modify the basic rules. There are structures that let you produce additional dice, merge dice of one class to create dice of another class, and increase the number of remaining rolls on a die. Your dice pool is limited, so while new dice classes will give you new abilities, you’ll also lose others. Another thing that you’ll have to content with is the weather. During winter each die that you deploy has a risk of freezing making it unusable until spring. And then there is the need to keep your citizens happy. A decision that you make during your seasonal council meetings may please the peasants, but cause grumbling among your citizen class. Anger one class too much and you’ll have a riot on your hands and watch your village go up in smoke.

Dice Legacy is not an easy game. You’ll fail a lot while learning how to allocate your limited resources, manage your dice pool, and determine the best mix of structures to build and when to build them. Mistakes made early on may not lead to an immediate demise, but instead send you down a slow road to inevitable defeat. Inject the randomness of dice rolls into the equation and you have even more to contend with. If you view failure as a source of frustration rather than a learning opportunity, you’ll probably want to pass on this game. 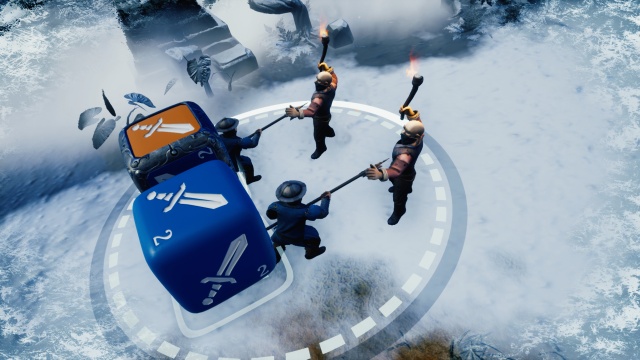 Overall, Dice Legacy is enjoyable as long as you enjoy a challenge. It has an unusual mix of gameplay that sets it apart from other games of this type. While the dice and some of your decisions add a random element to the game, it feels like Dice Legacy does have an idea of how it wants you to play the game. You don’t necessarily have the freedom to try a variety of strategies, if you want to succeed, that is. Perhaps that’s what makes it more of a survival game and less of a strategy game.