Loop Hero is a genre mashup – part rouge-like, part collectible card game, part strategy, and part idle. Often genre mashups end up being good ideas on paper that turn out to be less than the sum of their parts once they’re put together and released. Luckily Loop Hero is an exception to this – its parts come together to form a unique and compelling game.

In Loop Hero the world has been erased by The Lich and its inhabitants trapped in an endless time loop. All is not lost, though, because the world can slowly be restored through the memory of its inhabitants. First, they’ll have to figure out how to break out of the time loop, because each time they set out into the world they’ll be back in a void in which nothing exists except for the loop. 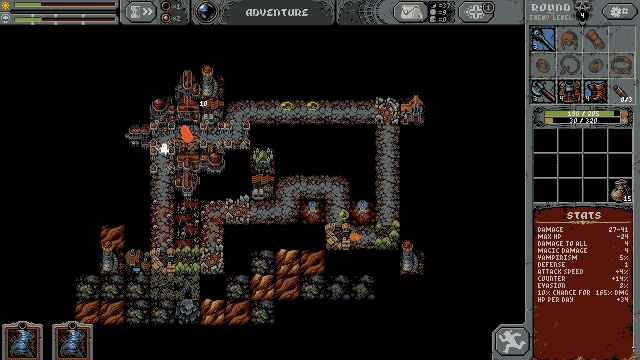 The loop is a randomly generated circuit created by a series of squares around which your hero will continually move from your camp and back again in an endless cycle. When you start out on the loop, the only things that will exist on it will be your hero, a few slime monsters, and your camp. Your hero will begin to automatically traverse the loop, only stopping when you pause the progress of time or the hero encounters a monster on the loop. When a monster is encountered an automated battle ensues, and if you survive the monster will drop a random assortment of gear and or cards.

Gear is important because each time you set out on the loop you won’t have any weapons, armor, or items. When the world is reset, the same goes for your inventory. When monsters drop gear, it is automatically added to your inventory. Inventory management is very streamlined – equip something and the previous item disappears, and anything left in inventory works its way to the end of the inventory queue until it eventual falls off the end and is gone forever. A mouse-over will let you quickly compare stats on newly acquired items, so it’s usually a pretty quick decision on whether or not to equip something. However, when you start getting items with secondary bonuses you will probably find yourself pausing the game for a minute while deciding which bonuses work best for you.

Cards are where the game’s real strategy side comes into play. Cards are used to recreate the world that The Lich wiped out. There are terrain cards which are placed outside of the loop that generate resources that you can use to upgrade your camp. You can gain bonuses by placing certain cards adjacent to others, and some cards upgrade into advanced terrain when you have enough adjacent cards of the right type together. There are also some consequences that can occur when this happens – you may suddenly have harpies coming down from the mountains or trolls settling nearby. Other cards are placed on or adjacent to the loop and spawn new types of monsters to fight. Making the loop more dangerous may not seem like a good idea, but the locations that generate monsters are also a source of resources and defeating monsters is the way you get more cards and gear. The last type of card provides modifiers, such as structures that affect the monsters on the loop or even let you thin out their numbers. 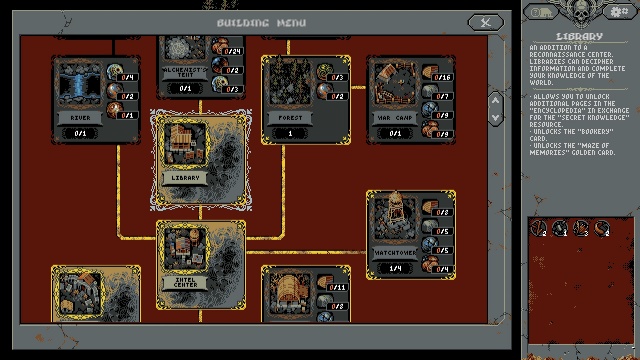 As you can imagine, a game centered on a loop is driven by cycles. As you make your way around the loop time will advance from day to night and back again. This cycle has an effect on the items you’ve placed around the loop, such as spawning a new monster once per day. The other major cycle is the loop itself. A circuit begins and ends at your camp, and each time you return you have the option of leaving the loop and returning to the camp. Return to camp and you keep all of the resources that you’ve earned, but that means that the loop will be reset once you leave camp again and you’ll be starting from scratch again. If you keep going the rewards will be greater, but you’ll risk dying and losing what you’ve gained. The gear you collect during a circuit will make you more powerful, but all those cards you’ve played will mean that more monsters are on the loop as well, and the monsters will grow more powerful with each loop iteration. Once you commit to another circuit, you’re committed in full, so the decision of whether to press on or return to camp becomes harder with each iteration.

When you return to camp, you’ll be able to use your resources to create new structures that will provide bonuses such as unlocking new cards for your deck or even giving you access to new hero classes. Others will let you start the loop with something other than your fists. The structures are related in something akin to a tech tree, so there are choices to be made between buying something that you can afford right now versus saving for something that will lead to the structure that you really want. 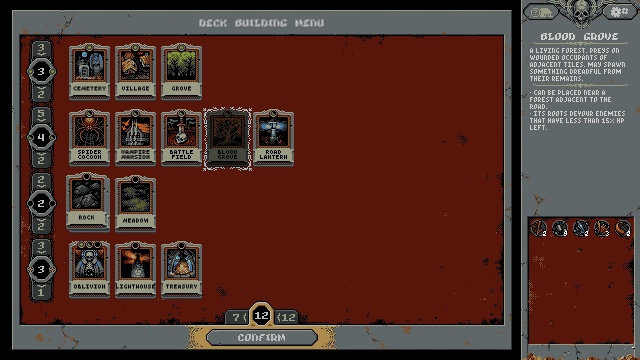 Camp is also where you can build your deck for your next excursion. Putting your deck together is pretty straightforward – each card has an associated cost and you’re given a total budget for your deck. However, the game is very stingy about giving you information on each card’s effect, especially when it comes to secondary effects. You’ll also see that some cards are locked although it’s not always entirely clear why they are. I can understand that the game wants to leave an element of surprise or gambling when it comes to using newly discovered cards or how they combine with other cards, but it would be nice to see the game give you information on the effects that you’ve already discovered rather than leaving you to keep track of everything on your own.

I can understand why someone would be a little hesitant to try a game that leaves its movement and battles completely hands-off – personally, I prefer to actively play games than to passively watch them. Don’t let the idle aspects of the game fool you, though. There’s a surprising amount of depth and strategy to the game that goes well beyond what you’d expect from it. Loop Hero is the kind of game that will have you telling yourself that you’ll play “just one more loop” while the clock hands make a surprising number of circuits of their own.