The Persistence is a first-person roguelike sci-fi horror game developed and published by Firesprite. The game started out as a VR game but has recently been released for other platforms including PC, PS4 and Xbox One. The game is overall a very fun game to pick up and play for a short period of time. Fans of Prey's "Mooncrash" DLC mode should appreciate this game the most since it has similarities with its roguelike style. Being set aboard a spacecraft, the game also gives me feelings of Alien Isolation - especially with all the sneaking and secret paths that you can take through each stage.

"The Persistence" is a space craft that has endured a catastrophic event that has killed everyone on board. You play as a copy of a human that the ship's AI has created. Your objective is to get off the ship alive. Your character is a copy of a person that has died on the ship and has all the memories of your past existence. The ship's AI guides you on your journey and revives you if you happen to die. 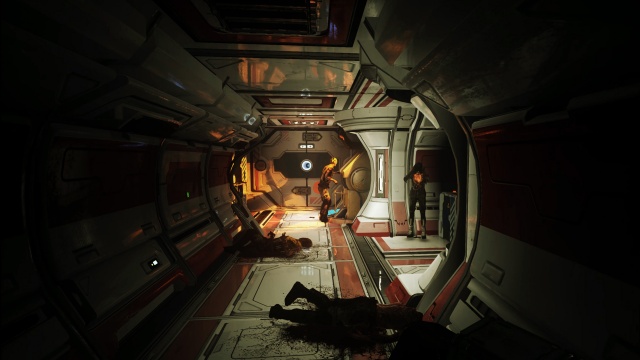 Welcome to The Persistence

The Persistence has no permanent death, but once you die, you lose all items that you collected. The most interesting part about the game is that it randomizes everything once you die. All the ship's rooms change, item pickups change and enemy placement changes. It's literally a walkthrough writer's worst nightmare but, yeah, it's a really great feeling if you're up for the challenge of not knowing what to expect. The game is fantastic for those "pick up and play" moments when you don't really want to devote a lot of time to a game and just want do "one run". While going through the ship, you can access maps that will show you the current layout of the ship. Even though the layout changes per playthrough, you are not left totally in the dark as to where to go. The maps also highlight your current position along with other icons for helping to navigate.

Your starting weapon and overall main weapon is a harvester. The harvester allows you to extract stem cells from enemies. The game encourages stealth and allows you sneak up behind enemies then target their neck and drain stem cells from their body. For when you have to engage in melee combat, the game has a parry system that allows you to parry enemy attacks and then counter with your own melee attack. After a parry, you sometimes get the chance to perform a stealth kill with the harvester as well.

Borderlands fans will probably enjoy the constant scavenging that is required to get through each stage. You'll have to constantly open lockers and cabinets in order to find supplies for upgrading and healing your character. Besides melee combat, the game has a mix of throwable weapons and guns to use for combat as well. You can gain a variety of grenades such as one that will slow time in the affected area. Along with stem cells, you'll also collect FAB chips and tokens. Tokens can be used to unlock and upgrade weapons at fabricators. You can unlock extra weapons such as a knife melee weapon and a device that grants you temporary invisibility. There is a super fun weapon that allows you to pick up enemies and slam them among the walls, floor and ceilings. It's a lot of fun to play around with the various upgrades and weapons until you find the perfect build that works for you. Back at the area where the ship's AI creates your character, you can use stem cells to upgrade your current body. Areas of upgrade include health and dark matter (power usage), melee damage and stealth. 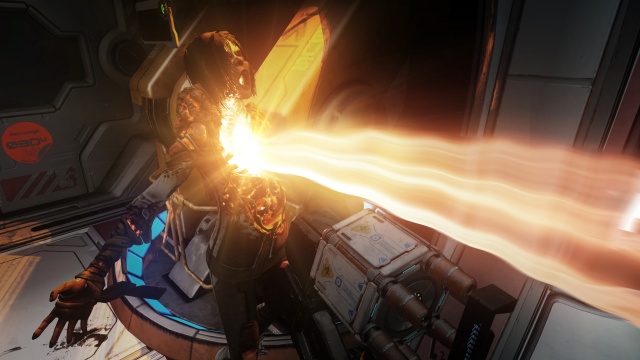 Even though the game is a horror, it isn't all that scary. Most of the horror comes from sneaking by enemies or engaging in fights that your unprepared for. The overall sound to the game is fantastic for getting in the mood. The AI's constant dialogue and enemy sound effects match the game well. The enemy design is pretty good. You fight against monsters that have been generated by the ship. Some of the creatures are unfinished and weak while others are big and much more powerful.

The Persistence is definitely a game where you have to choose your battles carefully and not go into a battle unprepared. A lot of patience is required to play the game and you'll have to do much experimenting with the weapons to find out what suits your playstyle. The game does have an Alien Isolation feel to it and it's got a pretty good atmosphere, which is something survival horror fans might enjoy, but it's still very much a rougelike game. If you enjoy roguelike games such as Prey's "Mooncrash", you'll most likely really enjoy The Persistence, but if you're not a fan of that style of gameplay this game most likely won't change your mind. It's highly addicting, but it can get frustrating with the continuous deaths you'll most likely suffer.

The Bad:
- Can get a bit repetitive and frustrating