Shop Titans puts you in the role of the shopkeeper that you've interacted with as an adventurer in countless RPGs. This time you're the one stocking the shelves with swords, staves, and armor for the village's warriors, rogues, and wizards who are about to embark on a quest. You begin the game by taking over a shuttered shop with very few fixtures and no inventory and are tasked with turning it into a thriving business. Local artisans will provide you with resources and the skills needed to turn them into final products with which to stock your shelves. Customers come in to browse your wares and make their purchases, and you use your profits to expand your store. A hundred hours or a hundred dollars later

So far, so good, and if this game was an economic sim it might be interesting to play, but it's not so it's not. Shop Titans is a mobile game ported to PC, which in and of itself is not necessarily a bad thing, but Shop Titans is one of those mobile games with timers on everything and an international exchange's worth of special currencies that can be earned at a glacial pace or purchased for real-world money. At first things aren't too restricted as the game leads you through the basics of its economy. You'll make and sell goods with relative ease and speed and enjoy watching your nascent business come to life. Before long, though, the mechanics that are designed to separate you from your money because of your impatience begin to kick in.

You are only given two production slots, and the items that you put there will take longer and longer to produce once you move beyond stocking your shelves with basic daggers and wooden staves. The irony here is that expanding your store actually makes things worse for your rather than better as you struggle to keep your shelves stocked with the ever more advanced items that your customers are asking for. Of course, you can send some money over to Kabam Games and they'll let you pick up an additional production slot or speed up the production of the items in your ever increasingly tightening production bottleneck. Otherwise you're in for grind until you can put together enough currency to open that next slot.

At first, I had some fun with the game - it does give a you a number of things to do beyond sticking things on your shelves. You can invest in and upgrade the businesses of the resource workers and artisans that form your supply chain, recruit heroes to undertake quests for rare materials, trade items on the game's market, and join a guild. Within two hours, though, you'll soon find that most of your time spent "playing" the game involves sitting idly in front of your computer screen waiting for various timers to countdown so that you can finally have what you need to kick off another timer. As you sit there, the game will happily present you with numerous opportunities to give it money so that you can stop sitting there and start doing something. Once you reach that point, you'll either have had enough of the game or begin to feel the temptation to give in to it. 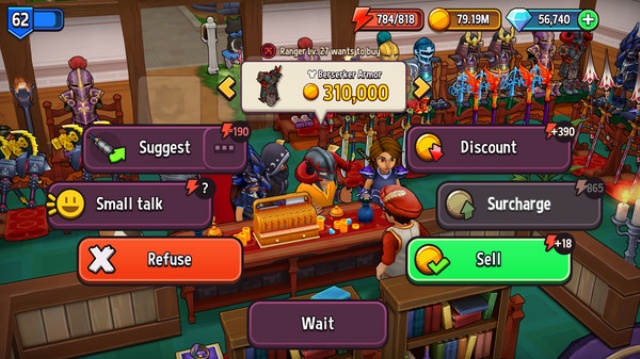 Negotiation requires energy, yet another resource

There are plenty of PC games that offer cosmetic options to players for a fee, and Shop Titans is no different. There are a ton of customization options and a seemingly unlimited stream of items available for a limited time only. However, with most PC games you can ignore the vanity items and still enjoy playing them without having to pay fees to enjoy the gameplay experience. However, Shop Titans is designed to be increasingly unplayable in the traditional sense unless you keep paying for premium currencies to push you through the grind.

Shop Titans starts off as a simple but enjoyable enough economic sim, but before long you'll learn that it's really a game of waiting for timers to expire. It's one thing to pop into a mobile game on your phone a few times a day when you have a minute or two, it's quite another to have to sit down at a computer and launch a game several times a day just to progress in bite-sized chunks. Unless you're willing to part with a steady stream of cash to continuously turn it back into a simple economic sim.

Final Rating: 40% - More of an exercise in waiting for timers than in managing a shop.