The Academy: The First Riddle takes place at Arbor Academy, an exclusive boarding school that only accepts the most extraordinary of students. You play as Sam, once such student who opens his front door one day to find a letter from Arbor Academy informing him that he's been invited to study at the school. If this sounds even vaguely familiar to you, that's not surprising - the game's opening and setting are very much Harry Potter-esque. Arbor Academy isn't a school of magic, though, it's more a school of, well, I'm not entirely sure. It's 500 years old, was founded by a genius way ahead of his time, and has a strange curriculum that includes classes in both mechanics and symbology. There's a lot of lore to glean from examining the statues, plaques, and books you'll find in the halls of the academy, but it all comes across as a collection of interesting anecdotes rather than a cohesive narrative. I found Arbor Academy to be less of a fascinating mystery and more of a collection of ideas that never quite coalesce into a compelling story. 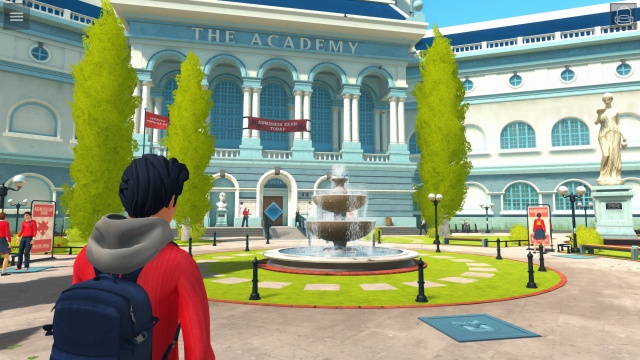 Welcome to The Academy.

Your engagement with the world of The Academy is further hampered by the characters that attend the school. It starts with your character, Sam, a voiceless, emotionless protagonist who is just carried along by events without any real engagement or ties to them. We know nothing about where he came from, why he came to Arbor Academy, or what he hopes to gain from his time there. The cast of supporting characters at least have personalities, although you've seen all of those personalities before. Make a list of boarding school film character archetypes and you've just assembled the supporting cast for The Academy. 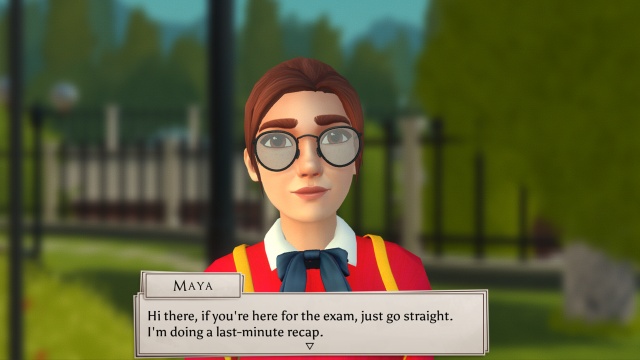 The game also likes to remind you that you're a student by including a couple of classes a day on your objective list. You're supposed to study before each class by reading a section of your text book, and the first thing each teacher will do is ask you a question from your homework. If you're the type who doesn't enjoy reading sections of text while playing a game, you don't have to worry. You have a 50/50 chance of picking the correct answer and there's no consequence to being wrong or reward for being right. Perhaps the developers thought that this exercise would help you in roleplaying a student, but since it has no impact on gameplay whatsoever the whole thing seems superfluous and unnecessary. 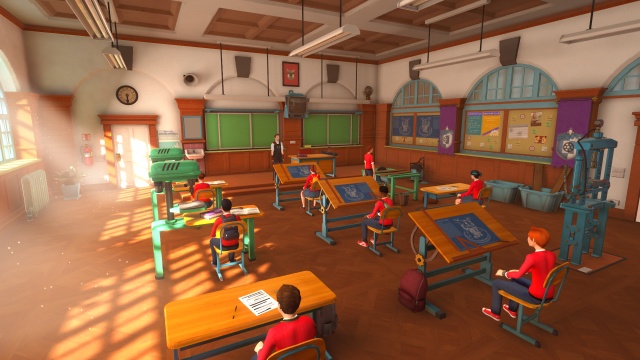 The adventure aspect of the game is rather milquetoast, but The Academy also has a heavy emphasis on puzzles. The presentation of the puzzles and their integration into the game take a lot of their inspiration from the Professor Layton series of games. So much so, in fact, that if you played any of the games in that series the connection is unmistakable. Every few minutes an encounter, conversation, obstacle, or interactive object will take you to a puzzle to solve. Sometimes the puzzles are thematically tied to the encounter that led to them, but for the most part they're not at all related. The puzzles are primarily of the logic and observation varieties, so much so that the puzzles that at first appear to be mathematical are really exercises in pattern recognition. The puzzle design is uneven, some are interesting and challenging, others seem to be there just to pad out the puzzle count, which seems to become more of a problem the farther you make it into the game.

All of the puzzles, share several characteristics in common. First of all, the puzzle instructions are poorly worded. I think that I spent more of my time with the puzzles trying to figure out what I was supposed to be doing than I did on solving the puzzles themselves. There's a hint system like in Professor Layton, but here you collect chocolate bars for hints rather than coins. Unlike Professor Layton, though, there's only one level of hint and it's pretty much a dead giveaway rather than the gentle nudge that Layton gives you with its first clue. 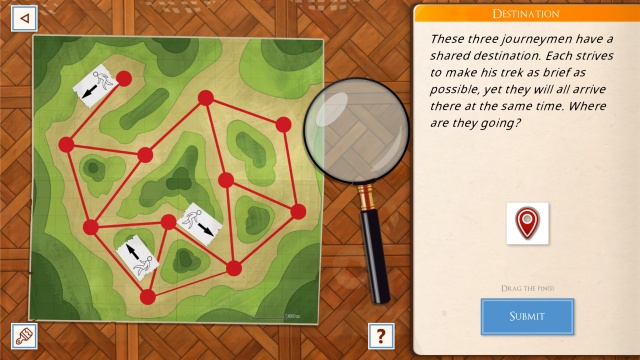 Did we forget to mention that they all move simultaneously?

Most of the puzzles are multiple choice, which completely defeats the wordplay of the "As I was going to St. Ives" inspired puzzles and often has you working out the puzzles starting with the solutions. There's no real penalty for making a mistake and selecting the wrong answer. You lose a point for selecting the wrong choice and then you can try again, but puzzle scores don't seem to have any impact on gameplay, and as I was playing I couldn't find any obvious way to check on my score as I progressed through the game.

I have a hard time recommending the game to the types of gamers who would find The Academy appealing from its description. Adventure gamers looking for a Harry Potter experience will be disappointed in how bland the world of The Academy is. Puzzle gamers will be disappointed in the overall quality and challenge of the puzzles. And Professor Layton fans, well, maybe The Academy will give them an even greater appreciation for how well-designed the Professor Layton games are.

Final Rating: 50% - Take the semester off and go backpacking across Europe with Professor Layton instead.