Players start out as a humanoid on a type of alien planet. You’ll traverse through the game’s organic environment and solve puzzles as your progress. It’s hard to talk about the story to Scorn much since it really doesn’t have much of concrete story. The game is all about the experience and what happens along the way. As the player, you’re just along for the ride – and it sure is one heck of an experience. What is going on is often left up to your own interpretation and there is a lot of symbolism in the stuff you do in this game.

The visuals for Scorn are some of the best I have seen in any horror game. The overall violence level reminds me of something from a Clive Barker novel or movie. Scorn does not shy away at all from showing graphic content – actually you get to see everything from a first-person perspective, so it’s like you get a front row seat to all the violence it has to offer. As for the visuals, I often look at concept art in magazines or digital format for many games and think to myself how the concept looks so much better than the in-game content, but with Scorn, it’s like I’m looking at the concept art in-game. Scorn’s overall visuals are so detailed that it all looks like concept art. Scorn’s environments are full of dead bodies and just a bunch of flesh. 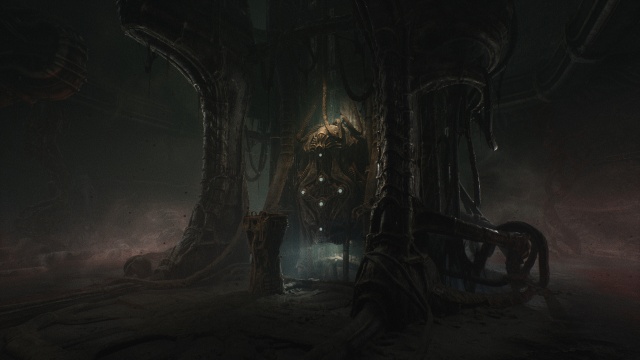 Scorn’s overall gameplay involves exploring and a lot of puzzle-solving. You’ll be solving all kinds of puzzles in this game and the puzzles are often more complex compared to what you’ll find in recent horror games. I often got stuck on many of Scorn’s puzzles (one in particular) for around an hour. After solving the puzzles, I always found a way I could have done them that would have made it easier. A lot of times, I created my own frustration from lack of patience. Be forewarned though, if you are the type of person that expects to fly through a game, this game’s puzzles will likely stand in your way for a while unless you seek out help. Scorn’s puzzles are just as unique as the rest of the game so they are fun. Thankfully, the game never does get so cryptic with puzzles that it reaches a Tormented Souls level of puzzle difficulty.

Along with exploring and puzzle solving, you’ll also be engaging in some light combat as the game progresses. You get access to projectile weapons and a type of melee weapon. The game offers around four total enemy types. Instead of fighting you can run away or dodge enemies if you know their patterns. Some of the enemies will crawl into environmental holes if you simply take cover and stay out of sight. I did have a few instances where enemies would trap me in a corner and kill my character. The smaller enemy in the game has a near aimbot levels of shooting its projectiles and there is a vicious big enemy that is hard to get away from when it hits you. 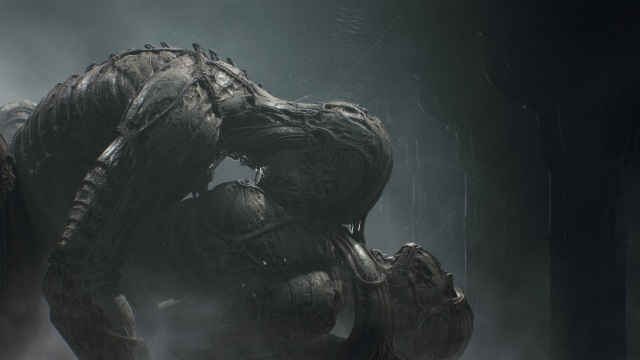 The game is often silent, but it does carry some atmospheric tunes that fit right in with the type of atmosphere that the game is going for. Sound effects are really good. You can hear constant squishing of flesh from dead bodies and crawling of nearby enemies in the distance. The game is not “scary” as in its going to make your jump out of your seat, but it will make you feel uneasy. Some of the violence depictions did make me wince a bit. The controls to the game seem smooth enough. Scorn shows everything that your character does in real time, so you’ll go through long reloading, healing and weapon changing animations - this can lead to getting damaged during fights if you don’t watch it.

Overall, the game has a very steady framerate. I did run into some slowdown issues at times. I really think it was due to disguised loading. There was one instance where it seemed like the game locked up, but it was just some bad slowdown. The slowdown is very rare, but it is there. For the most part, however, the game runs and controls very crisp. 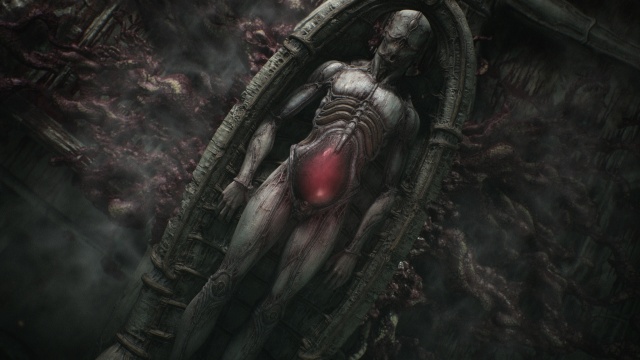 One major problem that I have with Scorn is the way the game saves. The game saves through autosaves and there is no indication of the save. You have to go to “load game” to see if your game has saved recently. The game has a checkpoint system after nearly every key item or objective that you collect/accomplish, but there is no way of telling when a checkpoint has occurred. Scorn is very cryptic with everything it does. It offers no map, no objectives, no warnings or tutorials to help. While some of this is good, the game gets a bit too cryptic for its own good, which leads to frustrations. My main complaint with its cryptic nature is the saves though – we should get some sort of save icon when the game is saving or a checkpoint occurs because Scorn’s levels are quite long. Speaking of length, the overall game took me around 8-9 hours, which includes a lot of aimless wandering and problems solving puzzles. I’d say the game length is around 4-5 hours if you know what you are doing.

Scorn reminds me a lot of what Agony was trying to go for when it released – a fresh new experience through a nightmarish setting. With Scorn though, it arrived very playable with only a few issues, unlike the tragedy that we experienced with Agony. Horror fans should definitely give Scorn a try. Scorn is an experience like no other horror game and every horror fan needs to support this great effort.

The Good:
+ Absolutely fantastic visuals
+ Unique puzzles, weapons and just about everything else

The Bad:
- Hard to tell when autosaving or checkpoints occur
- Overall combat can be frustrating (whether you run or fight)
- The ending could have a bit more to it

Final Rating: 80% - Scorn is an incredibly unique horror game. The visuals alone are worth the playthrough!